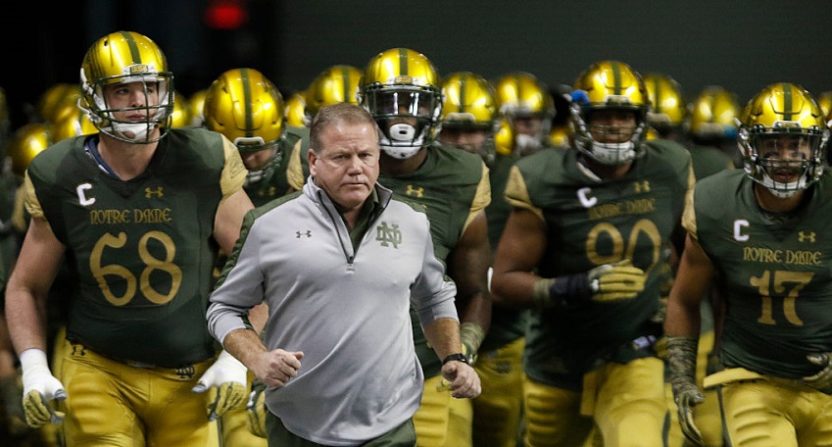 The Comeback’s college football preview coverage continues with the next team in our Top 50 countdown, the Notre Dame Fighting Irish. We’ll move up the list each day, leading up to the beginning of the regular season.

Notre Dame. The mere mention of the name evokes history and lore steeped in college football tradition. The program can boast of 11 national championship, 97 consensus All-Americans, and seven Heisman trophy winners.  College football simply would not be what it is today without Knute Rockne, the Golden Dome and Touchdown Jesus.

But the rut the program has been in for over two decades now has been well-chronicled. Aside from the national title game appearance after the 2012 season, the success that the program has enjoyed compared to its history among the elite has been few and far between.

Brian Kelly, the latest coach to try and restore the program back to its former glory is now entering his eighth season, and it’s been mostly rocky with promises unfilled. He needs a whale of a season to get off the hot seat.

What will be the next chapter in the ongoing saga for a cameo appearance among the nation’s elite?

Irish eyes were not smiling in 2016. Despite coming into the year as the preseason No. 10 team, expectations were reset early on. In game one, the offense clicked late and attempted a furious rally, but Notre Dame came up just short in double overtime, losing 50-47 to Texas.

The Irish rebounded to defeat Nevada 39-10 the following week, but from there on out, it was a season to forget. The offense couldn’t find any consistency, and the defense gave up far too many big plays to expect a season to remember.

It ended up being the worst season in South Bend in a decade, and the team stumbled to a 4-8 season. There would be no postseason. As a result, Brian Kelly is firmly planted on a precarious cliff looking down on his coaching future.

Notre Dame again pulled in a very good recruiting class. And if we’re comparing it against the bizarre affiliation with the ACC, it would rank second in that conference. Nationally though, it’s still a top 10 class with 10 four-star talents waiting to provide reinforcements. There are three Top 100 recruits already enrolled with a duo of tight ends, Brock Right (67) and Cole Kmet (84), as well as offensive guard Robert Hainsey (81).

It’s a solid class, but for Notre Dame to truly elbow its way back into the blue bloods of the sport, it has to start landing more five-star talent. The Irish simply have to find a way to win big recruiting battles against the likes of Ohio State and Michigan. Both programs are getting it done shopping for groceries right under the nose of Brian Kelly’s staff. Someone has to close the deal more often before the clock runs out.

14 – The number of sacks the Irish defense came up with all of last year. Brian Kelly defenses have never set the bar for getting after the quarterback, but it hit an all-time low last year. Notre Dame dropped a lot of close games due to the defenses inability to consistently make stops. And putting more pressure on the quarterback could have gone a long way in getting opposing offenses off the field. It’s when things get hot under the color that mistakes are made. There clearly weren’t enough of those situations last year.

123 –The amount of points the Irish offense scored in the first quarter. Compare that to opponents scoring just 54, and you begin to wonder how the team stumbled to just four wins. But no, it wasn’t getting out of the blocks that doomed Notre Dame, it was the rest of the game. Whether it was conditioning, focus, or the wrong mindset, it’s a pattern that is disturbing. And it’s a pattern that needs analysis and addressing going forward.

-4 – The overall turnover margin for the 2016 season. When you’re playing a lot of tight affairs, turnovers often tip the scale between winning and losing. It’s hard to predict and contain turnovers, but some programs just seem to be better at making their own breaks. Call it good fortune, or call it hard work. Either way, you want to be on the positive side of the ledger if you want the memories of a special season. It’s time to go to work on being ball-hawks on defense. It’s also time to make better decisions and secure the pigskin on offense.

Why it matters: It always matters, but USC is coming into this year with hype almost as high as the Pete Carroll years. If Notre Dame wants to be relevant again, and if Brian Kelly wants to be around for more, this is the year the Irish hold serve at home. It’s always a measuring stick game, but perhaps more so this year. What better way to rebound from a 4-8 season, than by beating your nemesis and potentially ruining the chances of a special season. But do the Irish have the talent and fortitude to do it?

Record in the last five meetings: 0-1 (The two have only played one other time in history)

Why it matters: Things got off to a sour start in 2016 against Texas, and it seemed to be a tone-setter. If there’s a bounce back year in store for the Irish, it’ll begin with a win over the first prime-time affair of the season. A win over SEC foe Georgia would open some eyes, and maybe stir up the echoes for a resurgence of sorts. The talent and experience may not be there to make a run at the CFP, but this is a winnable game that can mean the difference between a decent bowl destination, and one spent at home again.

Brandon Winbush, QB – DeShone Kizer is gone to the NFL, and the quarterback position is the most important player in a Brian Kelly system. It could be even more important for new offensive coordinator Chip Long. He loves to go fast and aggressive, and although the experience is lacking, Winbush is a true dual-threat QB with a strong arm and quick motor that could be a stud in this offense. With a lot of depth and returning talent at wide-receiver, there’s help to get things crankin’ as well. There will be some growing pains, but the 6-1, 226 lb. junior has a chance to be worth the price of admission. He better be if Notre Dame wants to get back to the postseason.

Mike McGlinchey, OT – It may not be sexy, but I’m going with an offensive tackle here. With a new signal-caller pulling the strings, the Irish need to be better on the ground than they were in 2016. For that to happen, they’ll need to get yards behind the 6-8, 312 lb. senior’s push on the left side. It’s not like the coaching staff can totally throw away the part of the playbook that works the other side of the field. But when tough yards are needed, it’s time to saddle up the future NFL first-rounder and let him blast away holes for running back Josh Adams. Then, let the passing game work.

Myles Morgan, LB – He’s the returning leading tackler on a team that needs to make more big plays in 2017 to help the offense out. He’ll be the quarterback of the defense at the middle linebacker position, and he’ll be pushing for All-American honors as long as he can build off of his 90 tackle, four sack performance of last year. Look for the coaching staff to bring him on more pressure packages to try and create momentum changing plays.

Brian Kelly will be gone after this year. I’m not one to call for a man’s job, but Kelly has been given ample time to get the Notre Dame program back to where it belongs. Curiously enough, he’s been given a longer leash than former coaches Bob Davie, Tyrone Willingham, and Charlie Weis despite similar unmet expectations. The Irish will bounce back a bit this year, but it won’t sniff anywhere near a New Year’s Six bowl. And it’ll be time to turn the page for an administration that has been very, very patient — almost to a fault.

The Irish will beat USC this year. There is a bit of a talent disparity, but the game is in South Bend, and The pendulum has swung a bit as the Trojans have gone through NCAA sanctions and the loss of Pete Carroll. The Irish have been getting it done in this rivalry lately behind the home crowd, winning the last two. USC is one of the darlings of the preseason, but we all know how that has ended in recent years. With the game being in the middle of the calendar, the new offensive scheme and quarterback will have a chance to get their sea-legs right. It’ll be enough to dash the hopes of Sam Darnold and company.

QB Brandon Winbush will have a better 2017 than Kizer’s 2016. It’s not like Kizer’s numbers were that bad. He still passed for close 3,000 yards with 26 touchdowns, and ran for another 472 yards and eight more scores. But he didn’t have the benefit of the new outlook that new offensive-coordinator Chip Long is bringing to South Bend. Winbush has the tools to be a perfect fit for the newer, more uptempo offense. He’ll run for more yards than Kizer did, and that’ll open up the passing game where Winbush will be able to utilize a veteran and talented wide-receiving corps.