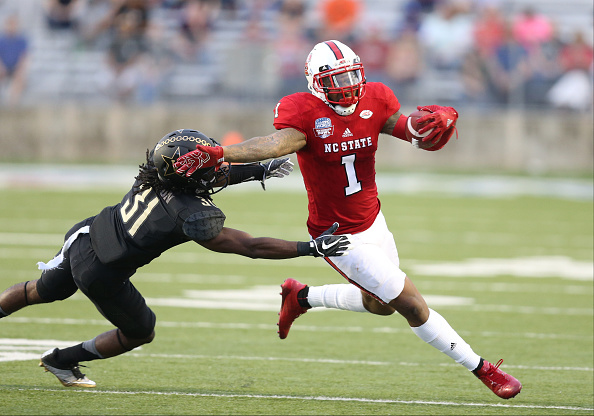 The Comeback’s college football Top 50 countdown continues with a trip back to the ACC and NC State stepping into the spotlight.

Is 2017 the year that NC State finally breaks through in the Atlantic Division?

Sorry, Wolfpack fans, but that’s a fair question. Since the league split into divisions in 2004, NC State has finished fourth or lower nine times, and managed to post a winning record in league play only twice (2005 and 2010). The best showing during that span was in 2010, when quarterback Russell Wilson guided the team to a 5-3 mark.

Although the numbers above aren’t very encouraging, there are plenty of reasons for optimism in Raleigh this fall. The Wolfpack defense welcomes back eight starters from a stellar unit that ranked 24th nationally in total defense and eighth against the run. On offense, nine starters return, including 3,000-yard passer Ryan Finley, second team All-ACC offensive lineman Tony Adams, and Jaylen Samuels, who could play a number of different positions for the team this fall.

To say that the 2016 season had many ups and downs is a serious understatement. The team certainly had plenty of highs – including impressive wins over North Carolina, Vanderbilt, and Notre Dame. Yet there were also a lot of lows, such as the early-season loss to East Carolina and the heartbreaking defeats against Clemson and Florida State, where the Pack played well enough to win.

What’s important to remember about the 2016 campaign was that four of NC State’s six losses were by a touchdown or less. Those types of things tend to happen to younger teams. However, with 17 starters returning from last year’s squad, the Pack will be one of the most experienced teams in the nation. That could be just enough to turn some of those close losses into Ws.

NC State signed the 10th best recruiting class in the ACC according to 247sports.com. The class contained players from six states, with most of them coming from Florida (8) and North Carolina (7). The top signee is defensive lineman Grant Gibson, who both Jaylen Samuels and Bradley Chubb said to keep an eye on this fall.

3.33 – This was the average yards per carry that the Wolfpack D allowed last year, the 10th best total in the country. NC State’s front seven was the strength of its defense last year. It played exceptionally well at times last season, including strong showings against Clemson (3.0 ypc), Florida State (2.63 ypc), and Louisville (3.7 ypc). Although it will be tough to improve much on these already-solid numbers, the Pack D needs to match them in order to finish in the top half of the Atlantic Division.

5.99 – This is the number of yards per play that the NC State offense needs to shoot for this season. When the Wolfpack eclipsed this total last year, they went 5-1, and would have easily been 6-0 if not for a head-scratching fake field goal call in the second quarter against East Carolina. With a veteran offense returning, the ‘Pack needs to try to hit this number in every game, especially against powerhouse programs like Florida State, Clemson, and Louisville, where an extra yard could be the difference between winning and losing.

112 – This is the average number of rushing yards NC State had in its six losses last season. Yes, I know that the Wolfpack has one of the better passing attacks in the country. However, the team struggled to run the ball at times last season, especially during its four-game losing streak, when it rushed for just 2.79 yards per carry. To its credit, NC State lost three of these contests by a touchdown or less. If it can make another play here or there this fall, some these moral victories could be actual victories.

Why it matters: This game will set the tone for the entire season. If the Wolfpack get a win in this contest, they’ll have a slight advantage in the Atlantic Division race because both Clemson and Louisville have to come to Carter-Finley Stadium. Similarly, a loss would mean that Florida State would have to lose twice in order for NC State to have any chance to win the division. That’s a very difficult deficit to overcome.

Why it matters: Simply put, this contest matters because it’s a rivalry game. The Wolfpack qualified for a bowl game last season by defeating the Tar Heels in Chapel Hill, which means that you can bet every UNC player will come into this one with a little more motivation than usual. An NC State victory would also be a huge win for recruiting, as it would be the third win over the ‘Heels in the last four meetings.

Ryan Finley, QB – A transfer from Boise State, Finley won the starting quarterback job and had a fine season. In 13 games, he completed 243 of 402 passes (60.4%) for 3,055 yards and a respectable 18/8 TD-to-INT ratio. He was especially dangerous on second down, completing 68.1% of his passes for 896 yards and six touchdowns. Given how well he closed out the season – a 235-yard, 3-TD effort against Vanderbilt – there’s no reason to think that he won’t improve upon these numbers in 2017.

Jaylen Samuels, TE/HB/FB/WR – Arguably the most versatile offensive player in the ACC, Samuels can do everything. In his career at NC State, he’s been a reliable running back, rushing for 700 yards and 16 touchdowns. Last year, he was the team’s leading receiver, catching 55 passes for 565 yards and seven touchdowns. Whether it’s as a receiver or a running back (or both), he’ll be a huge part of the Wolfpack offense again this fall.

Bradley Chubb, DE – Chubb was the top player on a very good NC State defense last season. He routinely made plays in the other team’s backfield, registering 21.5 tackles for a loss and recording 10 sacks. In addition to producing negative plays, Chubb has a knack for creating turnovers, forcing six fumbles over the last two seasons. He’ll be the unquestioned leader of the defense this year, and could be a first round pick in the NFL draft with another big season.

NC State upsets one of the big three in the Atlantic Division. Given that the Wolfpack nearly beat both Clemson and Florida State last year, this doesn’t seem like that big of a stretch. However, just about every media publication has NC State picked to finish in fourth place. I think there’s way too much talent on this squad for it not to post a huge victory over a top 15 opponent.

Because of the aforementioned win, the ‘Pack will finish in the top three of the ACC Atlantic division.