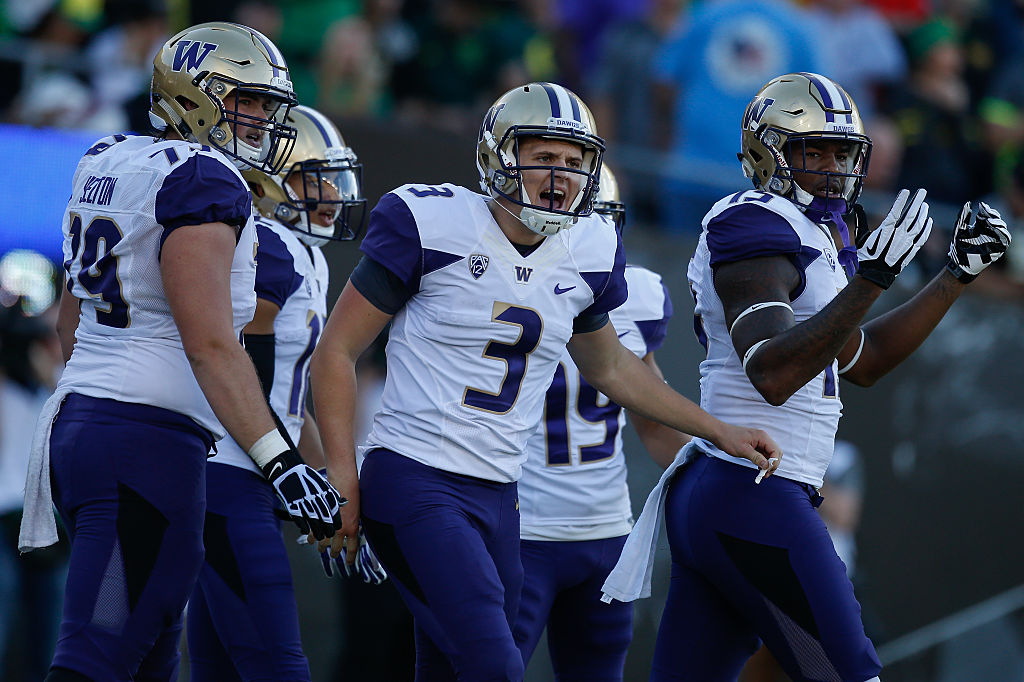 The Comeback’s college football Top 50 countdown is now in the top 10 as we approach the beginning of the regular season. Up next in our preseason rankings are the defending Pac-12 champions, the Washington Huskies.

The Washington Huskies are straight-up back, like tight-rolling the cuffs of your jeans is, inexplicably. At any rate, last year’s breakout 12-2, conference winning, CFB Playoff-appearing season for some was a year ahead of schedule. Nah.

Chris Petersen was always going to be a rock star at UW. With the majority of their stars returning on offense and a defense that will still be quick and nasty, you can fully expect all those breakout sophomores and juniors from last year to be grizzled vets ready to take on another CFB Playoff challenge. This time, they’ll go farther. These are becoming the second glory days of Washington football. Only Jake Browning is better than Billy Joe Hobert.

Big things were expected when Petersen was finally lured out of Boise. After more than a decade of wondering “When will Washington be ‘back’?” they returned in a fury. Behind quarterback Jake Browning and running back Myles Gaskin (both of whom are back in 2017), they paired a devastating offense with a hyper-quick defense and rolled their way into the CFB Playoff with only one blemish on the schedule, to USC.

The Huskies really hit the scene on a Friday night in late September, clubbing then-top 10 Stanford by 37 points before hanging a staggering 70 on Oregon. After that, folks knew the Huskies were big-game hunting like the days of yore.

But it all came to an abrupt end when the still-mostly young Huskies ran into CFB Playoff mainstay Alabama. The Crimson Tide showed Washington in a 24-7 paddling, which wasn’t really even that close, that the program still has a bit more to scale to get to the summit. Still, it’s hard not to be encouraged by the progress so soon.

It was a small class of only 18, but one guy who might immediately crack the game-day roster and make a huge impact is running back Salvon Ahmed. He’s gotten rave reviews as a game-breaker in fall camp, and you can impress your friends later on by learning his name now.

2,616 – The returning rushing yards of their top four rushers in 2016. Very few teams have the returning depth of the Huskies, and while their passing game gets more national play, Myles Gaskin (1,373 of those yards) will often be a key to victory. UW should enjoy the fact that he has plenty of experienced help behind him.

15.5 – The yards per catch of wide receiver Dante Pettis. Explosive John Ross had over 14 per reception last season while gaining 1,150 yards in 81 catches, and it stands to reason that Pettis won’t hit this mark as he becomes the featured receiver. But he will be the go-to guy as Chico McClatcher rolls into a more prominent role beside him.

Why it matters: Last year’s thumping of Stanford was Washington’s coming out party of sorts. The Cardinal were ranked 7th in the nation at the time, and it was a “whoa, Washington’s for real” moment nationally. This year, it’s much later in the season and in Palo Alto, where the Cardinal would like nothing more than their own “whoa” moment as Washington again figures to be in the mix for a CFB Playoff spot.

Jake Browning, QB – Browning is the total package and a Heisman favorite. He’s as good as anyone in the country, evidenced by his 43 touchdown passes, only nine picks, and over 3,400 yards passing. Still, there’s room to improve. Six of his nine picks came to USC (loss), Alabama (loss), and then Arizona State (sort of inexplicably). But against the two most “NFL looking” defenses he faced, the offense was shut down. He’ll be good again, and if he makes that step over those teams too, the sky’s the limit.

Chico McClatcher, WR – Dante Pettis will be the go-to guy, coming off of an explosive 53-catch, 822 yard season, but McClatcher will need to step into a more significant role with John Ross off to the NFL. He averaged over 18 yards per catch last season, but figures to get far more attention this year. He’s capable to say the least. Learn the name.

Tyler Rapp, S – The biggest question on this team on either side of the ball will be how to replace S Budda Baker, the team’s best defensive player and one of the best in the country. Rapp is a heck of a talent and will by default step into those big shoes, but he definitely has a chance to fill them. He had 4 picks last year.