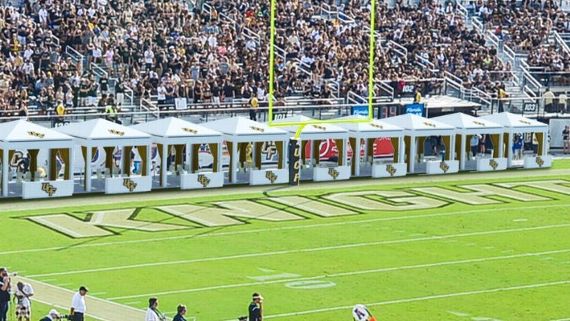 Sports teams around the country are starting to come up with more and more ideas for how fans can get as close to the action as possible. The University of Central Florida football team is the latest program to get in on the fun.

Cabanas will no longer be available only on the Florida beaches. Now, fans can sit and watch the UCF Knights in one placed right behind the end zone.

That’s right, fans of the UCF football team will have the option starting next season to sit in cabanas behind the end zones that are full of comfortable furniture, delicious food, and ice cold drinks for a cool $22,000.

UCF’s athletic program has already sold out half the suites, as it began marketing them last season when the Knights went 6-7 under first year head coach Scott Frost. The suites themselves can fit 12 people and, when they are purchased, they include tickets and parking passes for those 12 people.

The location of the suites also provides fans with access to an area with bathroom and other food and drink vendors.

“We had a waiting list for suites and we sold out of club seats and that led us to do a new club area last year,” Andy Seeley, an associate athletics director at the school, told ESPN. “But there was future interest from our market in more premium space, so we created more.”

Originally, Seeley said the plan included nine suites in the south end zone only. Once those sold out, UCF decided it was necessary to build nine more behind the north end zone.

And sold out one endzone already

One question that probably arose when the idea was pitched was how to keep the fans safe. Seeley told ESPN the cabanas sit far back of the end zone (though that picture above doesn’t really place them all that far back) and are padded with all the necessary safety requirements. While that may be the case, it doesn’t mean a player may not take a tumble over the padded wall in the front of the suite.

The Knights aren’t the first football team to install cabanas in their stadium. The Jacksonville Jaguars have poolside cabanas next to the pool in their stadium. When the Los Angeles Chargers announced their move to Los Angeles, they said they would have 16 cabanas at their games at the StubHub Center, although the location of said cabanas hasn’t been made official.