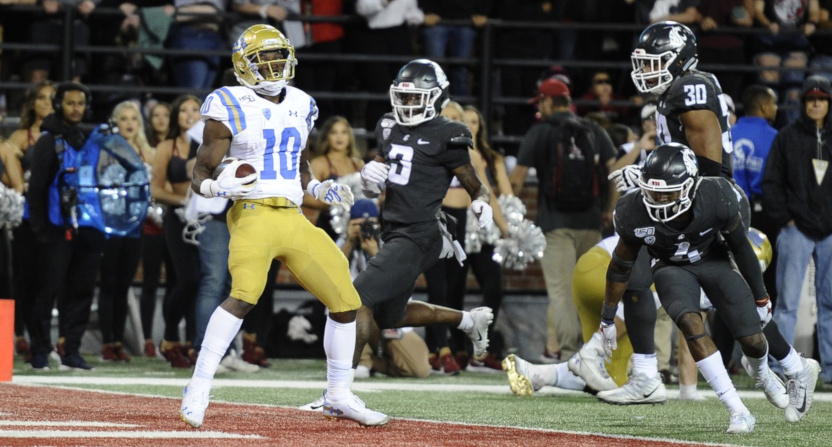 The UCLA Bruins pulled off one of the wildest wins in a long while Saturday, coming back from a 49-17 third quarter deficit to post a 67-63 road victory (their first win of any sort this season) against the previously-undefeated No. 19 Washington State Cougars. And they did that despite an incredible performance from Washington State quarterback Anthony Gordon, who completed 41 of 61 passes (67.2 percent) for 570 yards and nine touchdowns with two interceptions. The nine TDs broke the school record of seven Gardner Minshew II set for the Cougars last year, and Minshew was on hand to watch. Here’s Gordon’s ninth touchdown pass from late in the fourth quarter:

Meanwhile, UCLA’s Dorian Thompson-Robinson completed 25 of 38 passes (65.7 percent) for 507 yards and five touchdowns with an interception. Here’s one of his key passes, a throw to Demetric Felton (seen above, he had seven catches for 150 yards and two touchdowns and added a 100-yard kick return TD) from his own end zone for a 94-yard catch-and-run touchdown:

One of the crucial late moments came from a 69-yard punt return for a touchdown from UCLA’s Kyle Phillips, which gave the Bruins a 60-56 lead:

Gordon struck back with that ninth touchdown on the next drive, giving Washington State a 63-60 lead with 6:11 left. And the Cougars looked to be in good shape after that, especially when UCLA head coach Chip Kelly opted not to kick a short field goal on fourth and five from the WSU 17. An incomplete pass meant they turned it over and Washington State got it back with 2:38 left. However, Cougars’ receiver Easop Winston Jr. (who had 10 catches for 114 yards and four touchdowns on the day, plus a 45-yard punt return) fumbled on the next play; he was ruled down on the field, but replay overturned that, giving the Bruins the ball at the Washington State 26 with 2:26 left.

UCLA quickly got a first down on a Thompson-Robinson 17-yard pass to Devin Asiasi, but a sack and an incompletion left them in third and goal from the 15. And they had issues getting a play off on third down, and Kelly was all set to call time out…but he didn’t, and Thompson-Robinson hit Felton for a 15-yard touchdown to put the Bruins into the lead.

After that, Washington State had one more chance with 1:07 left, but the UCLA defense came up big, with Keisean Lucier-South sacking Gordon and forcing a fumble that the Bruins’ Josh Woods recovered.

Following the game, Kelly gave a very, very appropriate shoutout to #Pac12AfterDark, which this game personified.

This was a crazy one, and it ended with Gordon throwing for 570 yards and nine touchdowns and losing. (Oddly enough, that makes it similar to another Washington State defeat in the Mike Leach era, a 60-59 home loss to Cal back in 2014, where Cougars’ quarterback Connor Halliday completed 49 of 70 passing attempts (70 percent) for 734 yards and six touchdowns with no interceptions and still lost.) It also improved the Bruins to 1-3 and dropped the Cougars to 3-1. #Pac12AfterDark indeed.