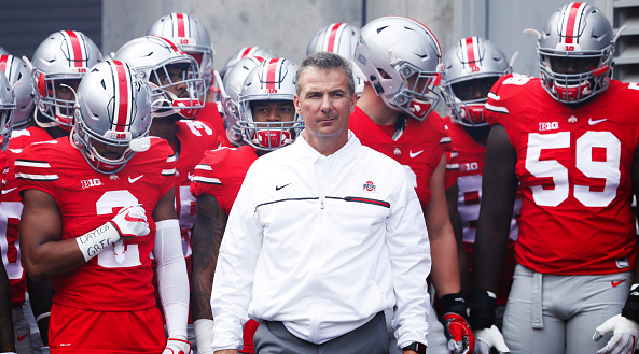 Urban Meyer hasn’t had too much to do since his short stint as head coach of the Jacksonville Jaguars ended ceremoniously. However, the former three-time national champion head coach has a new gig, though it isn’t as a leader of a football team.

According to the Columbus Dispatch, Meyer is joining the board of THE Foundation, an organization co-founded by Columbus real estate developer and Ohio State booster Brian Schottenstein, who has a very interesting family history, and former Ohio State player Cardale Jones.

The brand-new foundation is focused on paying Buckeyes football and basketball players to work with charities and will launch at the end of this month. It’s a way the school can take advantage of the NIL rules that have changed the landscape of college recruiting in recent years.

We proudly welcome @CoachUrbanMeyer to our board. Urban has 3 Nat'l Championships on his resume, including the '14 title w/OSU. He's recognized as one of the best recruiters in college football history. Urban looks forward to seeing future success for OSU and local charities. pic.twitter.com/UEvRf7eKxf

“There isn’t a better person to have on the board than Coach Urban Meyer,” Schottenstein said. “It goes without saying that he’s one of the greatest recruiters of student-athletes and coaches of all time. I appreciate his support and friendship.”

Meyer brings with him a strong reputation in the Ohio State community, even if he tarnished that reputation pretty badly during his extremely short NFL stint. Naturally, reactions to the news were mixed regarding the head coach and his official return to the OSU community and the way his reputation seems to be at odds with some of his actions.

do you guys have google? https://t.co/YhaxW9Fljk

Omitted the part about what he’s recognized for ‘round here: 2-11 in THE NFL, reportedly fired for cause, eternal running joke. https://t.co/a8mbOhr1k0

Things involving Urban Meyer don’t usually end well, so we’ll be keeping an eye on how this plays out, especially given that it’s already involved with a very gray area when it comes to boosters, college athletes, and money.