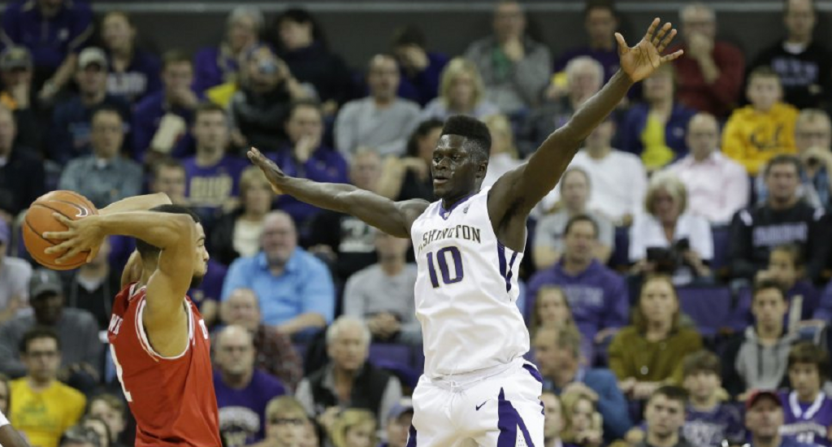 Washington Huskies senior forward Malik Dime allegedly slapped a heckling student in the face during the team’s PAC-12 basketball game against the Colorado Buffaloes on Thursday night in Boulder.

According to Jake Shapiro and Harrison Wind of BSN Denver, Dime — who sat out the game with a broken pinkie — heard it from heckling fans in the CU student section at Coors Event Center. The 6-foot-9 Senegal native did not appreciate what the fans were yelling at him, and reportedly walked over to the student section and slapped a fan in the face:

Being told that Washington's Malik Dime got up from the bench, walked over to the Colorado student section and then slapped a student.

Hearing Washington senior Malik Dime slapped a heckling Colorado fan in the face at the start of the 2nd half. Fan is not pressing charges.

Colorado wins 81-66. Washington’s Malik Dime just went over to the CU fan he slapped and looked like he apologized.

Shapiro’s report for BSNDenver.Com includes quotes from the students claiming that technically two students were slapped, as they say the follow-through of Dime’s slap hit a second student in the face:

“We were talking the usual game talk with the players like we usually do,” Dylan, a CU student said. “Malik looked over at us at one point and said ‘I’m gonna come over there and slap the s*** out of you.’ We didn’t think that was real so we just laughed and then at the end of the half he came over to us and pretended like he was giving me a handshake and I reached out and he pulled back and slapped me in the face and the follow through hit the person sitting right next to me, which was Brian.”

“I thought it was a real handshake,” Brian told. “He came over with a windup, it was a hard hit. It’s a double face, there’s no way around that.”

“One slap, two faces, I was impressed, he’s got a big wingspan,” Dylan remarked.

Following the game, Dime came over and shook hands, for real this time, with each student.

Romar on incident involving Malik Dime and Colorado fan: "I'm aware of it. I don't know anything about the details. We will look into it."

Then add in this situation with Dime, and the fact that the Huskies are currently without PAC-12 leading scorer — and projected No. 1 overall NBA draft pick — Markelle Fultz (sore knee)… yikes.

As Christian Caple of Tacoma’s The News Tribune asked in his Huskies game recap, “Can this season get any worse?”