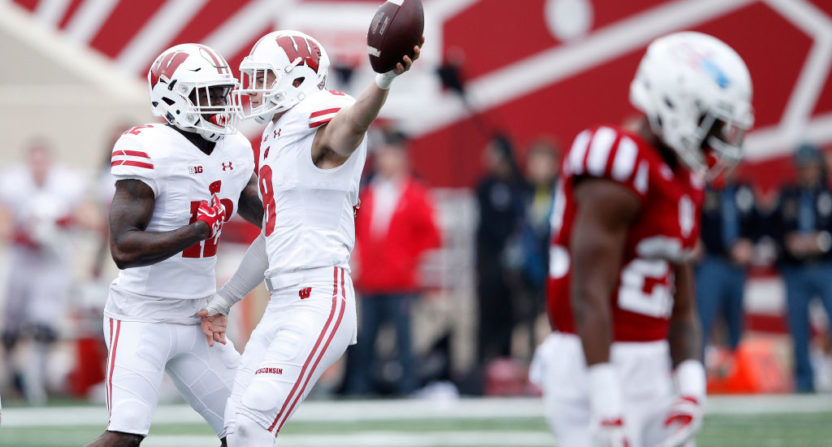 Wisconsin’s weak schedule has been a major topic of conversation so far this season. The CFP selection committee seemed to agree with that assessment also, slotting the Badgers ninth in its initial rankings. Most college football commentators also noted the Big Ten’s travails this week, and see them as being bad for the conference. Ohio State’s blowout loss is certainly bad for the Big Ten East, as is Michigan State’s upset of Penn State. Both of those results, however, are very good for Wisconsin.

This brings us to the other Big Ten West story. The Northwestern Wildcats, after becoming the first FBS team to win three straight overtime games, are a very quiet 6-3. Northwestern should be favored in its three remaining games- against Purdue, Minnesota, and Illinois. Northwestern has good wins over Iowa and Michigan State (which just got a lot better today), and two good losses. The early-season loss to Duke is a head-scratcher, and it hurts the résumé, but a 9-3 finish will earn the Wildcats a Top-25 start.

A week ago, Wisconsin looked like a team that would be lucky to have one Top-25 victory before the Big Ten Championship Game. Now, the Badgers look very likely to have two. Everyone can stop talking about if an undefeated Wisconsin would be left out now. With three ranked wins, the Badgers could probably survive a loss to Michigan and get in the Playoff at 12-1. Résumés can change lightning-fast in this sport. So while this week may be billed as an awful one for the Big Ten, that’s only true of the East. This week went as perfectly as could be if you’re a Big Ten West school.

I had 24 teams remaining in contention last week. That was a mistake, though, as I forgot to eliminate Georgia Tech. So, really, there were 23 teams left. This week, we wave goodbye to eight more.

Iowa State picked up its third loss and is now eliminated. The same is true of Stanford, Kentucky, LSU, South Carolina, and Arizona. I am also eliminating Penn State. Two-loss P5 champions are very much in play for a Playoff bid this year (as we’ll discuss below), but Penn State can’t win the Big Ten East unless a very unlikely set of circumstances comes to pass. If both Ohio State and Michigan State lose two more regular-season games, then Penn State is still alive- but that’s not happening. The final elimination is Virginia Tech. The Hokies have no real quality wins and have been officially eliminated from their division race.

It feels very weird to not eliminate a team that just got blasted by 31 points, but that’s the position I find myself in. Ohio State still controls its own destiny in the Big Ten — as does Michigan State — and therefore neither the Buckeyes nor Spartans are eliminated from the Playoff.

In the first three years of the Playoff, we haven’t seen a two-loss team make it to the top four. This year, though, we are rapidly running out of one-loss Power 5 teams. Only one remains in the Pac 12, and Washington will face its two toughest games of the season in the next three weeks. After next week, the Big 12 will only have one one-loss team remaining. The ACC and SEC each have only two teams left with less than two losses. And then there’s also Notre Dame. Wisconsin is undefeated out of the Big Ten. That’s it- nine teams, and we’re guaranteed to drop to eight next week.

Therefore, just about every two-loss P5 team capable of winning its conference is still alive. Washington State is lacking quality wins and got blown out twice, so the Cougars are out. The same is true of USC, even though the Trojans only suffered one blowout. USC has a maximum three ranked wins, but none of those teams will be ranked very high- and it’s also very unlikely that Stanford ends the season ranked. USC will be at the back of the pack of two-loss P5 champions, so it’s essentially out of the Playoff race.

Ohio State, Michigan State, and Oklahoma State are not, though. They will all need some help — Notre Dame has to lose at least one more game — but there are less than ten teams ahead of all three of these. Oklahoma State has the added challenge of needing help to get into the Big 12 Championship Game, as that would require a major upset of either Oklahoma or TCU. Still, though, there are plenty of scenarios that keep these two-loss teams alive.

In general, a Group of 5 team has two potential paths to the Playoff. The first is if that team is pretty clearly one of the best in the country. We haven’t seen a Group of 5 team in that category since Boise State during the Kellen Moore years. We’ve seen good Group of 5 teams, and we’ve seen undefeated ones, but we haven’t seen the dominance and big nonconference wins that were emblematic of Boise State and TCU 5-8 years ago. UCF might be close to that this year — advanced metrics still love the Golden Knights — but it hasn’t had a chance to really show that on a big stage.

The second path is if a Group of 5 team can go undefeated, and the P5 just knock each other out at contenders. We’re getting closer to that happening each week, and this week was a big one. The same points that apply to two-loss P5 teams apply to UCF. At some point, a P5 champion with enough losses will fall behind the Knights. It probably isn’t two losses, at least with a good schedule. But if, say, Washington State wins the Pac 12, a 12-0 UCF team may very well stay ahead of the Cougars. We’re not quite there yet, but a few upsets here or there could weed out contenders. If Ohio State loses to Michigan but still wins the Big Ten, or if a three-loss Iowa State can win the Big 12, then UCF could have a strong case as a top four team.

As crazy as that sounds after just writing about UCF’s Playoff hopes, it’s very true. The Toledo Rockets are just one or two upsets away from being the front-runner for the Group of 5 bid. Remember, the bid has to go to a conference champion, not the best Group of 5 team. SMU upsetting Memphis and then UCF winning the AAC would do it. If USF can win the conference, the Bulls’ weak nonconference schedule might bump Toledo ahead. Toledo made a statement this week, though the Rockets still have tough games remaining against Ohio and Western Michigan.

Other than UCF and Toledo, though, the only team in real contention is Memphis. Maybe USF will earn consideration if it can blow out the Knights, but that weak schedule is a killer. If we see some chaos in the AAC and someone upsets Toledo, then Boise State or San Diego State have the résumé to merit some consideration. If it’s not Toledo or one of those two from the Mountain West, then the bid will go to the AAC. No one from the Sun Belt or Conference-USA is in contention. Not even Troy — even with its win over LSU — could compete with a three-loss AAC team.

Next week looks like the best week of the college football season. We should get three Top 10(ish) matchups. TCU faces Oklahoma, with the winner all but locking up a spot in the Big 12 title game. Georgia travels to The Plains to face Auburn for the Bulldogs’ stiffest test since Notre Dame. Lastly, Notre Dame and Miami square off. If Notre Dame wins, the Irish will be just two wins away from a Playoff berth. A Miami win would solidify the Hurricanes’ status, and would give them some leeway if they drop a game.

On top of that, there are a ton more ranked battles. Michigan State and Ohio State face off for the Big Ten East lead. Alabama travels to Mississippi State in the Tide’s toughest test of the season so far. Iowa State can keep its Big 12 title game hopes alive when the Cyclones host Oklahoma State. Also, on Friday night, Washington will travel to Stanford. The Cardinal might not be ranked next week, but a win would effectively shut the Pac 12 out of the Playoff. Lastly, Iowa visits Wisconsin. The Hawkeyes need a miracle to win the Big Ten West, but they can assure themselves a good ranking by backing up their huge win over Ohio State.