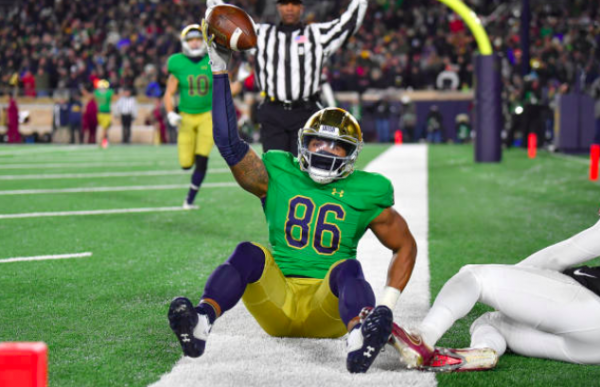 Aside from Oklahoma’s late escape against Oklahoma State, none of the actual Playoff contenders did anything noteworthy this week. Sure, Clemson and Ohio State picked up solid wins. Alabama looks like Alabama, and Notre Dame blew the doors off a Florida State team in free-fall. What does this all mean, though?

First of all, it’s bad news for Washington State. The Cougars have an atrocious nonconference strength of schedule, and no noteworthy wins in conference. Also, the loss to USC just looks worse and worse. Unless teams ahead of Washington State start losing–and there’s not much time left–the Cougars will be looking at no better than the Rose Bowl. A great season, certainly, but not what a 12-1 P5 champion would expect.

The solidification at the top also hurts the SEC. It will be close, but if Michigan, Clemson, and Notre Dame all win out, then the SEC will only get one bid. Even if Georgia beats Alabama, the Tide would fall behind those three teams (possibly a 12-1 Oklahoma as well, but that’s less sure). Equally important, Georgia’s chances of staying in the bracket with a close loss to Alabama decrease with every non-upset.

There are still two weeks with possible chaos, plus conference championship games. Don’t expect the entire Top 10 to win every week. And remember, Oklahoma and West Virginia still have to face each other–possibly two weeks in a row.

We are winding down another season of my CFP Eliminator. If you’re not already following, I’ll be eliminating teams throughout the year in this Twitter thread. I eliminate teams as we reach a stage where, in a year even with extreme chaos, there’s no reasonable scenario for that team to make the Playoff. Obviously, it’s theoretically possible for every team to end up about 6-6. But that’s far from reasonable, so I’m not worried about that possibility. 2007 was the most chaotic season in recent history, so my benchmark question always is, “Is there a scenario that gets this team in the Playoff? Does that scenario require significantly more chaos than 2007?” If the answer to that second question is “yes,” then the team is eliminated.

We entered this week with 13 teams still alive. All of the top contenders won, so the only eliminations were two of the ACC stragglers. And, unless we start seeing some upsets in the next few weeks, Syracuse will be eliminated as well, even if the Orange win out.

I discussed this last week, but the weekly exodus of teams in the back half of the Top 25 is leaving us with a dearth of options for New Years’ Six bowls. Kentucky should finish 9-3 and will be ranked around the Top 15 this week, but the Wildcats are not a good prospect for a major bowl. Kentucky has lost three of its last five, and twice struggled against bad SEC East teams. Florida should also finish 9-3, but is similarly a very flawed candidate for an NY6 bowl.

So who’s left? Syracuse will be a solid option if it wins out, but that would mean beating Notre Dame. Maybe 9-3 Syracuse can earn a bid. N.C. State and Boston College also will have at least three losses (and Syracuse will still play Boston College in two weeks). Penn State should finish 9-3 and will slide up in the rankings, but will it be enough? LSU should get an NY6 bid–as should the Iowa State-Texas winner this week–but who is left after that?

So far, the selection committee has not shown any respect to either Utah State or LSU. Neither has been ranked or mentioned by the committee so far this year. If UCF and one of those two win out, it will be hard to keep two Group of 5 teams out of a major bowl. There are several three-loss P5 teams left, but would they really be deserving of an NY6 bid over an absolutely dominant 12-1 Utah State team? Would fans rather see that Utah State team against LSU, or would they rather see a Penn State team that struggled to live up to its talent all year? The Aggies should be No. 13 in the major polls this week. How long can the committee keep them down?

Don’t expect to see too many major upsets this week, either. Michigan hosts Indiana and Oklahoma hosts Kansas. Those two should safely be one-loss teams heading into the final weekend of the regular season. Ohio State visits a Maryland team in free-fall, and Alabama and Georgia are each playing nonconferences cupcakes to prepare for rivalry weekend.

Clemson does host a decent Duke team, but the Tigers are safely in the Playoff at 12-1 anyway. (Duke would be a possible NY6 team if it wins out, though.) West Virginia has a potentially tricky trip to Oklahoma State, though. And Notre Dame plays Syracuse. An Irish loss would make a Playoff berth tricky without some chaos, but Notre Dame possibly locks up a bid with a win. The Irish still have a head-to-head win over Michigan, though the resume is weak otherwise. Syracuse, meanwhile, would all-but wrap up an NY6 bid for the ACC with a win. (Even if Boston College beats 9-2 Syracuse, then Boston College would likely get the bid.)

Iowa State and Texas will meet in a game with major Big 12 title implications. Iowa State only has two conference losses, and the Cyclones still hold the tiebreaker over West Virginia. Texas, meanwhile, also only has two conference losses, and has the tiebreaker over Oklahoma. Whoever wins that game will help determine the Big 12 Championship Game participant. West Virginia and Oklahoma will play in two weeks. There are several scenarios for who plays in the title game, but this Iowa State-Texas game figures centrally in all of them.

And, in what is almost unquestionably the biggest game of the weekend, Cincinnati and UCF will battle for the AAC East crown. UCF will be guaranteed a New Years’ Six bowl (and an outside shot at the Playoff) if it wins out. If Cincinnati can win, on the other hand, then the race between the Bearcats, Utah State, and potentially UAB (if the Blazers beat Texas A&M this week) or maybe even Buffalo will heat up.

The surrender cobras were out in full force in Stillwater.

Losing late to #17 Indiana, Rutgers had a 4th and 32 and nearly pulled off a miracle touchdown.

This puts an even bigger spotlight on star recruit D.J. Uiagalelei.

The surrender cobras were out in full force in Stillwater.

Losing late to #17 Indiana, Rutgers had a 4th and 32 and nearly pulled off a miracle touchdown.

This puts an even bigger spotlight on star recruit D.J. Uiagalelei.