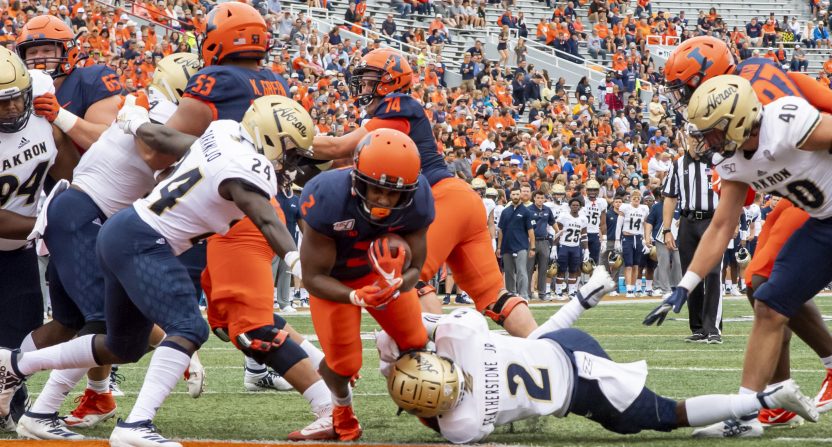 Congratulations Akron (0-12) and UMass (1-11)! You’ve been invited to play in the fourth annual TheComeback.com Bowl. It’s college football’s premiere showcase event to determine the worst team in the FBS. The schools will meet this Saturday at H.A. Chapman Stadium in Tulsa, Oklahoma.

TheComeback.com Bowl is a celebration of the absurdness of the college postseason. Man can create designer genes. We can manufacture a computer chip that mimics the human brain. But we can’t come up with a comprehensive playoff system in college football.

Instead, we have a glut of insignificant bowls that are glorified exhibition games. #Boo.

Here’s how we arrived at this year’s matchup:

UMass’ lone victory was a 37-29 home victory over Akron. However, the Minutemen had the worst average scoring margin in the nation (minus-33.6). Akron was America’s lone winless team but at least the Zips were more competitive (minus-25.8).

The city of Akron! We know so little about it other than being the hometown of LeBron Raymone James. But did you know Wardell Stephen Curry II was born there too? Imagine two future NBA MVPs from this forgettable Ohio town. When it comes to the University of Akron, its most famous alum is NFL Hall of Fame pass rusher Jason Taylor. He must feel so sad for his alma mater.

This is the first winless season for Akron. (It did have back-to-back-to-back 1-11 campaigns from 2010-2012). What happened? Call it Terry Bowden’s revenge. You might remember Bowden – most famous for leading Auburn to an undefeated season in 1993. Due to NCAA probation, they were banned from the postseason and never got a shot at the national championship. Bowden coached at Akron from 2012 to 2018 and was fired after going 4-8.

His successor, Tom Arth, coached a team that had roughly 70 scholarship players (85 is the NCAA maximum). The lack of depth and talent showed in the results.

Paying Terry Bowden not to coach and paying Chattanooga to release Tom Arth from his contract to come to Akron and lead the Zips to 0-12 and the absolute bottom of NCAA D1 Football. 🤢

Akron owns the nation’s longest losing streak at 17. They haven’t won a game since Oct. 27, 2018, when they beat Central Michigan 17-10. Since then, the Zips have been outscored by 400 points. This season, all but two losses were by less than double digits: the 37-29 defeat at UMass and the 20-17 setback at Miami of Ohio. The Zips went three straight games without a touchdown and were shutout consecutive times in that stretch. They were last in the FBS in scoring (10.5 points per game), rushing offense (47.6 yards per game), and total offense (243.2). If you love punting, Akron is the team for you. They kicked away the ball 80 times, tied with Vanderbilt for second most in the country (Georgia Tech had 81).

We have a 0 yard punt from Akron!!! This is the best football game I’ve ever watched!!!
pic.twitter.com/NLnyctg8dH

Arth will get time to rebuild Akron. He was once a backup quarterback for Peyton Manning in Indianapolis (2003-05). Prior to Akron, he coached at Division III John Carroll and at FCS Chattanooga. He has a career 49-21 record, so eventually he might turn the Zips around. The program was in a bowl game as recently as 2017 when it lost to Florida Atlantic in the Boca Raton Bowl.

We know what you’re thinking:

Why is UMass playing football?

Fair questions. UMass was once an FCS powerhouse, appearing in three national championship games, winning the title in 1998. They wanted to play with the boys and in 2012 became of a football-only member of the Mid-American Conference. After the 2015 season, the Minutemen left the MAC after declining to become a full-time member of the league in all sports.

UMass, now an independent, might have fared better if they had opted to remain in the MAC. However, it’s not like the Minutemen were trending up. They have been one of the worst programs for a long time, with a record of 19-77 since joining the FBS. The Minutemen have never come close to a winning record. UMass football has been such a disaster that some are predicting that the administration will eventually pull the plug.

This season, UMass gave up more points per average (52.70) than anyone else in FBS history, surrendering more than 60 points four times. They were also last in total defense (561.2 yards), rushing yards allowed (299.1), rushing TDs allowed (50), and pass efficiency defense (178.23). The low point might have been a 63-21 loss to Liberty. The Fames rolled up a school-record 730 total yards. Liberty’s Stephen Calvert passed for 441 yards and four touchdowns – in the first half.

The captain of this wrecked ship is first-year coach Walt Bell, previously the offensive coordinator at Florida State. UMass fired Mark Whipple who had two stints at UMass, coaching them to the FCS 1998 national championship. Bell had a lack of scholarship players, reportedly down to 50 “healthy” ones at one point.

UMass is clearly in hospice. It’s time to say goodbye.

Boston Globe columnist Dan Shaughnessy summed it up best: “So stop the madness. Stop pretending to play big-time football. You are not competing. It is not good for UMass.”

There you have it. Akron vs. UMass! Admission and parking are free at TheComeback.com Bowl. As a bonus, one lucky fan will get to participate in the game! For one play, you will have your choice of being a kicker or punter for either team*.

*DISCLAIMER: Participant is aware of and understands the risk of injury. Risks range from minor injuries such as scratches, bruises, and sprains to major injuries such as loss of sight, broken bones, joint, ligament, cartilage, or back injuries, concussions, and heart attacks to catastrophic injuries including paralysis and death.