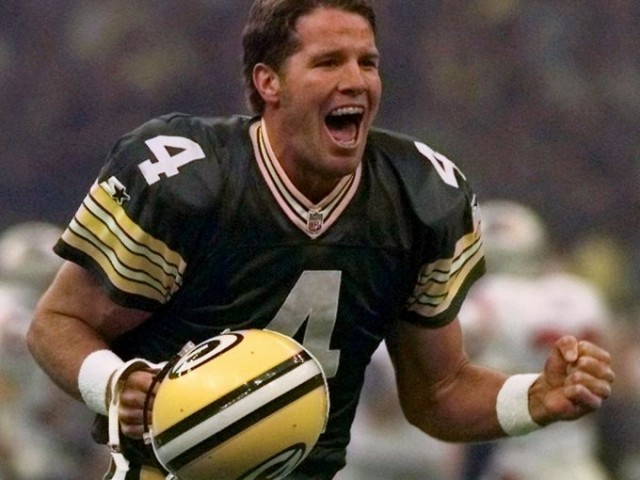 If a player ever deserved to be a first-ballot selection into the Pro Football Hall of Fame, Brett Favre certainly topped the list. Voters acted accordingly on Saturday night in San Francisco.

Favre, the NFL MVP for three straight seasons (1995 through 1997) and the quarterback who brought the Green Bay Packers their first Vince Lombardi Trophy since Super Bowl II, didn’t have to wait to join pro football’s immortals. He led the eight-man class which will be enshrined in Canton, Ohio, this summer.

Favre, a Mississippi boy who loved the swashbuckling, often improvisational playing styles of childhood idols Archie Manning and Roger Staubach, played that way with the Packers and the other teams he represented in the NFL. He led the Minnesota Vikings to the precipice of a fifth Super Bowl appearance, but the bulk of his work as a quarterback came with the Packers. He took a dormant franchise and returned it to the mountaintop in Super Bowl XXXI, defeating Bill Parcells and the New England Patriots.

Vince Lombardi coached his last game with the Packers in Super Bowl II, in 1968. The Packers didn’t make the Super Bowl for more than a quarter of a century. Favre — whose reunion with the Packers’ other iconic quarterback, Bart Starr, tugged at America’s heartstrings last Thanksgiving — is the man who brought another title to “Titletown, U.S.A.” His place in pro football history is considerable, and now, that place will gain formal recognition in the Hall of Fame.

One player who won’t join Favre this year — but who will go to the top of the list next year — is Terrell Owens. The receiver whose most prolific years were spent with the San Francisco 49ers naturally hoped he could make the Hall of Fame when the Niners were hosting the Super Bowl, but that didn’t happen. Owens is second all-time in receiving yards and third in touchdown catches, but those gleaming credentials didn’t lead to the first-ballot inclusion voters granted to Favre.

The receiver who made the Hall of Fame before Owens? Marvin Harrison of the Indianapolis Colts. Peyton Manning’s most trusted target cranked out 100-catch seasons with noticeable regularity. A model of high-level consistency, Harrison’s excellence was virtually impossible to argue against. The main cloud hanging over his candidacy was his off-field behavior, but the guidelines for voters in the Pro Football Hall of Fame make it clear that off-field considerations should have no bearing on the voting process.

That last point is relevant to the selection of the team owner on this list. Eddie DeBartolo, Jr., the only team owner to preside over five Super Bowl championships, got the call from the Hall with the Super Bowl in San Francisco, the site of his many triumphs with his beloved 49ers. DeBartolo was indicted on a felony charge in 1998. In baseball, that might have been seen as important. The Pro Football Hall of Fame viewed the matter differently. One of the most successful owners in sports history, DeBartolo was born in Youngstown, Ohio. He will relish the return to his home state — and nearby Canton — this summer.

Kevin Greene, an outside linebacker who spent most of his career with the Los Angeles Rams but flourished even more with the Pittsburgh Steelers, was voted into the Hall of Fame as well. Greene registered 160 sacks in his career, making him one of the greatest pass rushers the sport has ever known.

Orlando Pace of the St. Louis Rams was another no-brainer for HOF voters. Without his presence at left tackle — now considered a position every bit as important as quarterback — Kurt Warner and Marshall Faulk wouldn’t have been able to become “The Greatest Show On Turf” in the Edward Jones Dome. Pace enabled the Rams’ high-flying offense to get off the ground and win the first Super Bowl in franchise history (XXXIV, in January of 2000).

An iron man in his prime, Pace enabled Warner to distribute the ball to his roster of receivers, giving teammates and coaches the freedom to worry about other matchups on the field. The Rams made a second Super Bowl (XXXVI) thanks to Pace, and they continued to make the playoffs under quarterback Marc Bulger when Warner got injured and then moved to other teams in the latter portion of his career. Pace remained the constant in the Rams’ finest hours.

Two men made the Hall of Fame as Senior Committee selections, given to players whose careers ended more than 25 years ago.

The late Ken Stabler, recently discovered to have had CTE, finally joined the other great quarterbacks of the 1970s in the Pro Football Hall. You can read more about his story here.

The other Senior Committee selection was guard Dick Stanfel. He played for the Detroit Lions and Washington Redskins in a seven-season career. In those seven seasons, Stanfel made five Pro Bowl squads and was named a First-Team All-Pro five times as well. He won two NFL titles with the Lions in 1952 and 1953. Everything he did turned into gold. As a result, Stanfel joins the Class of 2016 in the Pro Football Hall of Fame… on the golden anniversary of the Super Bowl.