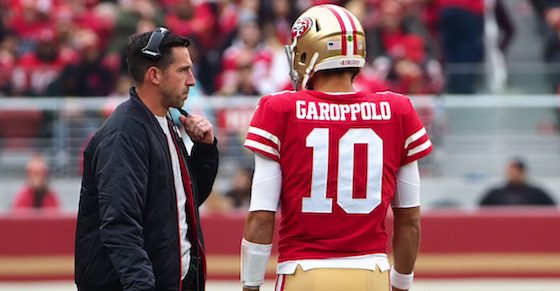 The end is near for Jimmy Garoppolo with the San Francisco 49ers. We just don’t know the expiration date.

How long can coach Kyle Shanahan stick with Garoppolo? Probably until the 49ers (8-7) are eliminated from the playoffs. However, Garoppolo’s thumb injury has put his status for Week 17’s game against the Houston Texans into question. If the regular season ended today, the Niners would be the No. 6 seed in the NFC, but with two games left, that spot is tenuous at best.

Coaches are reluctant to make quarterback changes. They’ll play it safe with a veteran unless an injury or sheer incompetence forces them to make a switch. Better to stay with the QB you know rather than the QB you don’t. Shanahan knows what he has in Garoppolo. But with every lackluster performance, it’s becoming more apparent that he’s not good enough.

Garoppolo gave his critics more ammunition last week by throwing two interceptions in a 20-17 loss at the Tennessee Titans. Following the defeat, San Francisco general manager John Lynch liked a tweet sent by a 49ers fan that said, “Leave Jimmy in Nashville.” Officially, Lynch said that he “accidentally and unknowingly Liked a Tweet.”

Fans might be ready for the Trey Lance Experience, but Shanahan isn’t. Otherwise, he would have permanently turned the keys over to his prized rookie. The upside of athleticism and arm strength isn’t enough to make a dramatic move.

So Shanahan will keep starting Garoppolo (if healthy), hoping that his play-calling and defense can overcome his quarterback’s deficiencies. He has every reason to believe it could work. He’s seen it before. Garoppolo was mostly a caretaker when the Niners made a run to Super Bowl LIV. To Garoppolo’s credit, he came within one overthrown pass of probably beating the Kansas City Chiefs.

However, that team was far more talented and dominant. This San Francisco squad can’t survive Garoppolo’s mistakes. And for the 49ers to consistently be a championship contender, they need a QB upgrade. Shanahan and Lynch made that point clear when they traded up in the 2021 draft to select Lance. They took a guy out of North Dakota State who played one game in 2020 due to the pandemic-affected year.

Once San Francisco made that pick, Garoppolo’s San Francisco career was officially on the clock. Everyone wondered openly when Lance would take over. Would the Niners immediately plug him in? Or follow the Patrick Mahomes model of sitting Lance for most of his rookie year, “redshirting” to get him fully ready for 2022.

Well, we’ve got our answer. Lance has only started one game, and that was due to an injury to Garoppolo. In a 17-10 loss to the Arizona Cardinals, the rookie rushed 16 times for 89 yards. That’s a welcome option to the renowned Shanahan rushing attack that you simply don’t get with lead-footed Garoppolo.

Through the air, however, Lance went 15 of 29 for 192 yards and an interception. Not surprising for a rookie in his first start on the road against a good defense. Lance hasn’t thrown a pass since and has appeared in only one game.

With Lance not ready for primetime and the Niners winning six of eight, Shanahan was relatively happy with Garoppolo. Shanahan is one of the best play callers in the game. He can scheme pass catchers wide open so that his quarterbacks have easy throws. That’s why Garoppolo leads the league in yards per completion (12.6) and is second in yards per pass (8.5).

Shanahan’s teams always have a good running game regardless of who lines up at running back. And with George Kittle finally healthy again and the emergence of Deebo Samuel, Garoppolo didn’t have to carry a huge burden. He just needed to execute and not make turnovers.

Everything was going well until the Tennessee game. It’s one thing to lose, but when you blow a 10-0 halftime lead and your quarterback throws a pair of picks, doubts creep in. Although, a hurt thumb might have contributed to his struggles.

The #49ers and Jimmy G struggled in the second half against the #Titans. A torn ligament and chipped bone could be a reason why. https://t.co/6t9T9MQ4B4

Since joining San Francisco via a trade with New England in 2017, Garoppolo’s time with the 49ers has been marked by injury (he has started 10+ games only twice) and inconsistency. Even in his career year in 2019 when the Niners reached the Super Bowl, he was at times a bystander on offense. In three playoff games, he threw just 58 passes with two TDs to three INTs. Not the numbers of a quarterback you trust.

The Niners will ride Garoppolo for now, but they seem poised to turn the offense over to Lance permanently. Lance’s physical talent will allow Shanahan to open up his playbook in ways the league hasn’t seen. Perhaps he’s a bigger version of Kyler Murray.

Sometimes, divorce is a good thing. The Niners might be getting an upgrade at QB. And Garoppolo might be able to land with a team that appreciates him more. Regardless of his limitations.