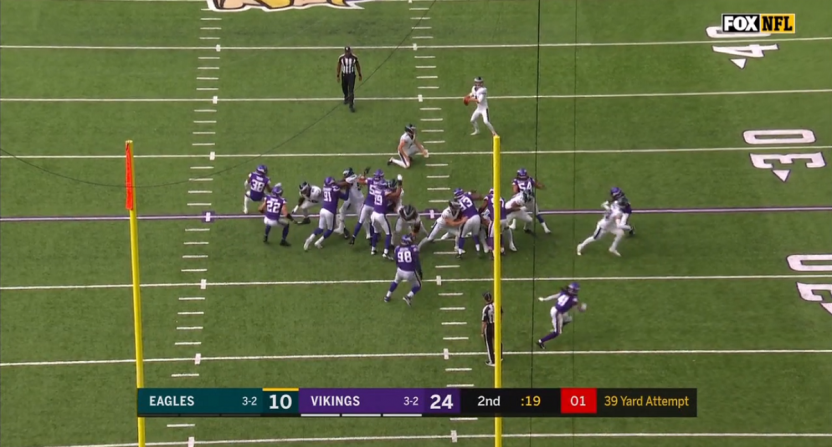 The Vikings seemed like they were going to build on their 24-10 over the Eagles lead at the end of the first half, driving with less than two minutes to go. It would have been fitting given how Minnesota had dominated things throughout.

Then Stefon Diggs got involved with another comical lowlight, following up last week’s hilariously apathetic downfield block attempt. To his credit, Diggs at least seemed to be trying this time, but this is the kind of interception you basically never see:

That ball went right through his hands, off his helmet, and somehow up in the air farther downfield, where it was picked off.

So not great, right? The Vikings lose out on a chance to extend their lead, and the Eagles get the ball in decent position to at least cut into the deficit heading into halftime. They ended up facing 4th and 4, and as they were well within field goal range, it wasn’t too big a surprise to see Doug Pederson elect to kick. Of course, as it’s Doug Pederson, it also wasn’t surprising to see he’d elected to try a fake.

What was surprising was how poorly it went, from design to execution.

Seriously, how do you design a fake field goal with just one receiver? Did everyone know this was happening, or did they freelance it because the Vikings lined up a certain way? The holder just stands there! Maybe make yourself useful!

It’s tough to imagine funnier back-to-back interceptions, but there’s still a whole second half to be played, so maybe we’ll get a few more.