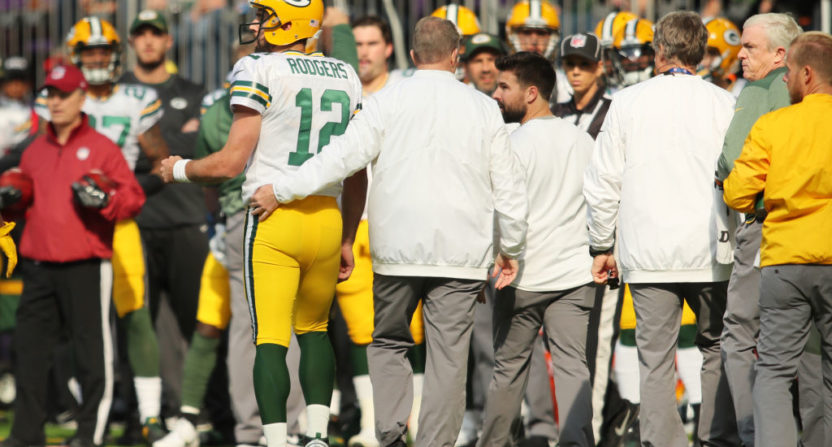 The NFL has had a rough go this season, with the loss of several star players to injuries. Packers QB Aaron Rodgers joined the growing list on Sunday, breaking his collarbone against the Vikings. Rodgers could miss the rest of the season, opening up the NFL North title race after Green Bay seemed destined through five weeks to win the division.

QB Aaron Rodgers suffered a broken collarbone. There's a chance he could miss the rest of the season.

The division race has a renewed sense of excitement, but it has come on the back of injuries and mediocrity. Three of four teams have changed quarterbacks since Week 4. Matthew Stafford has been the only constant, and even he was nursing ankle and hamstring injuries during Week 6.

Unless the Packers can make a trade before the Oct. 31 deadline or sign a free agent like Colin Kaepernick, they’ll roll with backup Brett Hundley, who relieved Rodgers on Sunday with 18-for-33 passing with one touchdown, three picks and a fumble. The good news for Green Bay is the rest of the NFC North doesn’t look particularly imposing. But instead of owning a two-game lead had Rodgers led them to a Week 6 win, the Packers are tied for first with the Vikings, who have their own injury woes, at 4-2, and the Lions are one game behind at 3-3.

Until Teddy Bridgewater comes back from injury, it’s hard to see Minnesota being any better than average. And even then, Bridgewater is a young quarterback who hasn’t played an official game in nearly two years after tearing his ACL and suffering other knee damage in August 2016. With Sam Bradford’s season in jeopardy, the Vikings have rolled with Case Keenum, who’s impressively thrown five touchdowns to only one interception while completing over 64 percent of his passes through five games. History suggests he won’t keep that up.

While the Lions have Stafford, who gets a much-needed bye this week, their inability to run the ball and their spotty defense make them an even iffier contender than the Vikings.

So… can the Packers still win this thing?

Rodgers suffered a broken collarbone midway through the 2013 season, and Matt Flynn did just enough to get Green Bay to the playoffs with an 8-7-1 record. That year, Rodgers returned for Week 17 and the playoffs. Though Green Bay’s decision to immediately let fans know Rodgers could be done for the year suggests this fractured clavicle is worse, it wouldn’t be shocking to see Rodgers ready to go for two key games to end the regular season: vs. Minnesota and at Detroit. Until then, Green Bay has eight games, including matchups with the Bears and Browns.

According to ESPN Stats and Info, the difference between Rodgers and Hundley against this schedule equates to about 1.4 wins.

One view of the impact of Aaron Rodgers’ injury, via @ESPNStatsInfo: pic.twitter.com/DnAKFcwJcn

So the numbers still like the Packers’ chances to reach nine wins, and if Rodgers does return they’re looking at a fourth straight season with at least 10 wins. That feels a bit optimistic, and it still might not be enough to win the division from the Vikings, who have a more favorable remaining schedule. But it’s not like Green Bay’s NFC competitors are known for taking advantage of these situations. Last year, the Packers started 4-6 but stormed back to steal the division from the Lions in Week 17.

With a little help, Green Bay could wind up with another to chance to nab a division title when they face the Vikings in Week 16 this year.