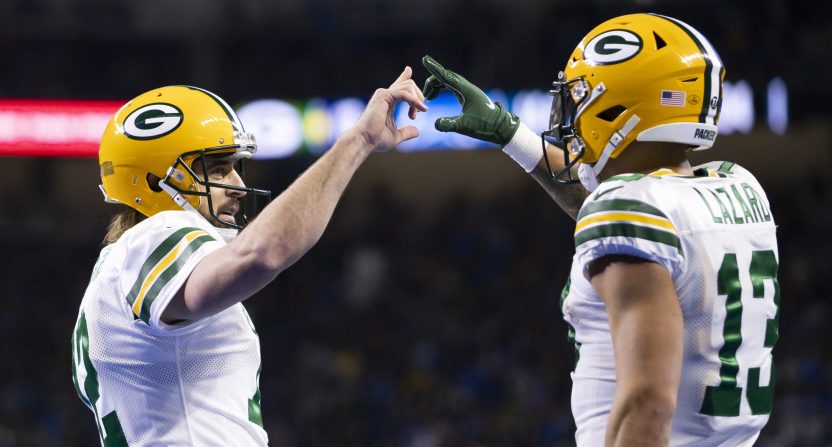 Last season, Davante Adams accounted for roughly 37% of Aaron Rodgers’ passing yards and 30% of his passing touchdowns for the Green Bay Packers. Now that Adams is playing for the Las Vegas Raiders, the question is, where does that production go?

While it would be almost impossible to expect anyone to match Adams’s output from last season, Rodgers seems to see Allen Lazard as their heir apparent to that role.

“Obviously, Allen Lazard is going to step into the No. 1 role,” Rodgers said, “and I think it’s going to be a very seamless transition for him as a primary blocker and kind of a niche guy for us, to get an opportunity to get more throws, be No. 1 in the progression more often.”

Lazard has a career-best year last season, garnering 40 catches for 513 yards and three scores. He re-signed with the team during the offseason.

Rodgers has some high praise for all the receivers on the Packers this season, or at the very least has a lot of optimism about their ability to step up.

“I like the guys that we got,” Rodgers said, per NFL Network on Saturday. “Obviously not having Davante, who took the lion’s share of the targets last year and had an incredible season, there’s going to be the same amount of balls and yards and touchdowns to go around. So now it’s a matter of: Who’s going to be in those situations to make those plays?”

As for who might be a wild card in the Packers receiving corp, Rodgers singled out fourth-round rookie Romeo Doubs.

“Romeo Doubs has had a really nice start to the camp,” Rodgers said. “He’s been getting a lot of attention based on some of the plays that he’s made. I like the approach. Very understated kid, very humble kid from kind of inner city L.A., made his way to Nevada.

“I was sitting with him at lunch the other day and really just marveling. It’s surprising how many teams passed on him. Whatever reason it was, we all feel really good about Romeo and the start he’s gotten off to.”