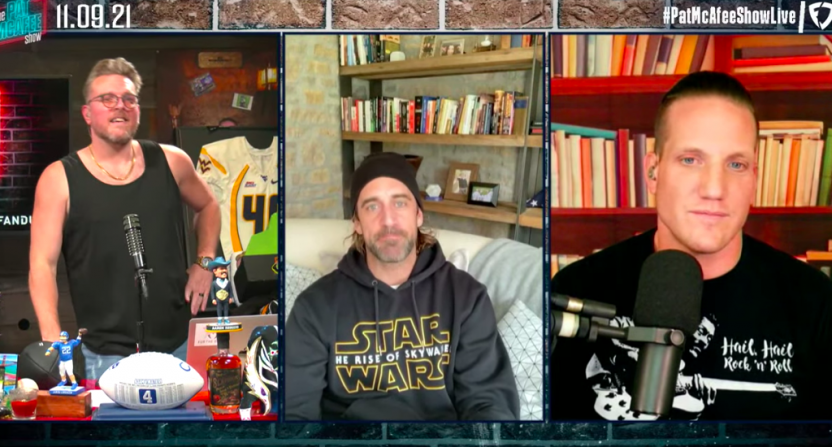 There was a lot of information to be gleaned from Aaron Rodgers’ appearance on The Pat McAfee Show on Tuesday. In his first appearance since Friday’s diatribe about the reasons that he did not receive a COVID-19 vaccine in which he namechecked the “woke mob” and “cancel culture,” quoted Martin Luther King, Jr., and mentioned that he was taking medical advice from Joe Rogan. He since received plenty of strong criticism from NFL circles, was satirized on Saturday Night Live, lost a health organization sponsorship, and saw his role in the State Farm commercials be diminished.

A contrite Rodgers admitted that he “misled some people about my status, which I take full responsibility for those comments.” He also tried to back away from the massive controversy he started, saying “I’m gonna get back to doing what I do best and that’s playing ball…further comments I’m gonna keep between me and my doctors.” He also doubled down to say “I have a lot of admiration for Joe [Rogan]” and that he hadn’t changed any of his stances from last week regarding vaccines or alternative medicines.

All of that is pretty notable and worth talking about, but it seemed like all anyone wanted to talk about on social media afterward was Rodgers’ hoodie, featuring a The Rise of Skywalker logo. The mere inclusion of a much-derided Star Wars movie was exactly what the internet needed to take this crazy story to the next level.

Aaron Rodgers wearing a Rise of Skywalker hoodie tells you EVERYTHING you need to know about him. https://t.co/4fR8GZn4C4

He definitely doesn't have his taste back if he's wearing a Rise of Skywalker hoodie https://t.co/6OYGKNM2s7

genuinely more mad about the choice of hoodie than his garbage medical opinions https://t.co/m6uMgIxOp2

If anything exemplifies a man with poor judgement, it's wearing a Rise of Skywalker hoodie in public. https://t.co/qzH9UWR81B

Still wearing Rise of Skywalker stuff in 2021 is reason enough for the Packers to cut him. pic.twitter.com/1t4rnu2VXw

rise of skywalker sweatshirt even more flagrant than his comments last week https://t.co/icjZRfIa3Q

Seems like Aaron Rodgers can do no right these days, even in the most unassuming of ways. (But seriously, The Rise of Skywalker was pretty terrible…).