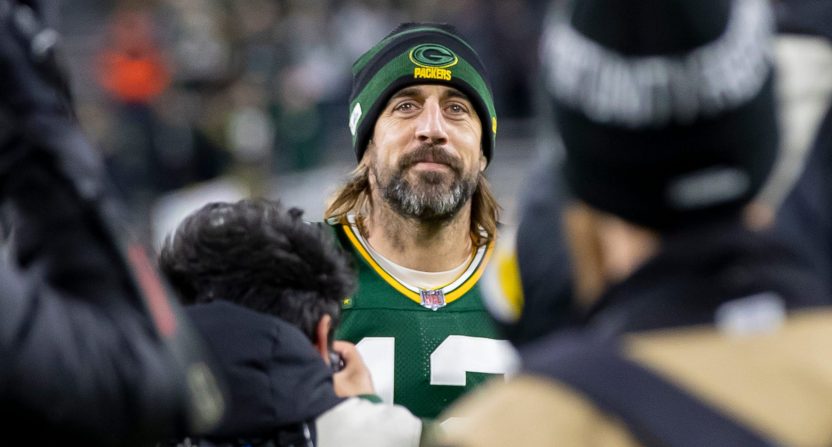 The Green Bay Packers have their playoff situation set. Win or lose, they will be the No. 1 seed in the NFC and earn a first-round bye as well as a home-field advantage throughout. While Green Bay would certainly love to end the regular season with a win and end up 14-3, it’s not a big deal if they rest their starters and end up losing to the lowly Detroit Lions.

The Packers are planning to start Aaron Rodgers on Sunday and then LaFleur will see how the game goes.

“I don’t think he needs to play. I think he wants to play and keep the momentum going.”

“I don’t think he needs to play,” said LaFleur. “I think he wants to play and keep the momentum going.”

By all accounts, Rodgers is in line to win his second-straight MVP trophy (all due respect to Hub Arkush). His 3,977 passing yards, 35 touchdowns, and just four interceptions are a big part of why Green Bay is in the position it’s in. It’s very likely that Rodgers will just want to get some snaps in to maintain game shape, but won’t go the entire time.

LaFleur did note that not every starter will be playing on Sunday. He told reporters that Jaire Alexander, Randall Cobb, and David Moore all will not play in the game.

Rodgers is certainly taking a risk that he could be injured, especially given that he’s playing on a bad toe that has been bothering him for a while now. The reaction to the news that he would play in what is essentially a “meaningless” game for the Packers certainly kicked up an interesting reaction on social media.

Nothing to play for and will still play.

Packers fans when a defender gets close to him pic.twitter.com/hpH4TodX3C

“He wants to lock up MVP for sure” #Packers #GoPackGo https://t.co/x4MysKKhwo

For Packers’ fans’ sake, hopefully, Rodgers comes away from the game unscathed and the team can spend the next two weeks recovering as they prepare for their first playoff game.