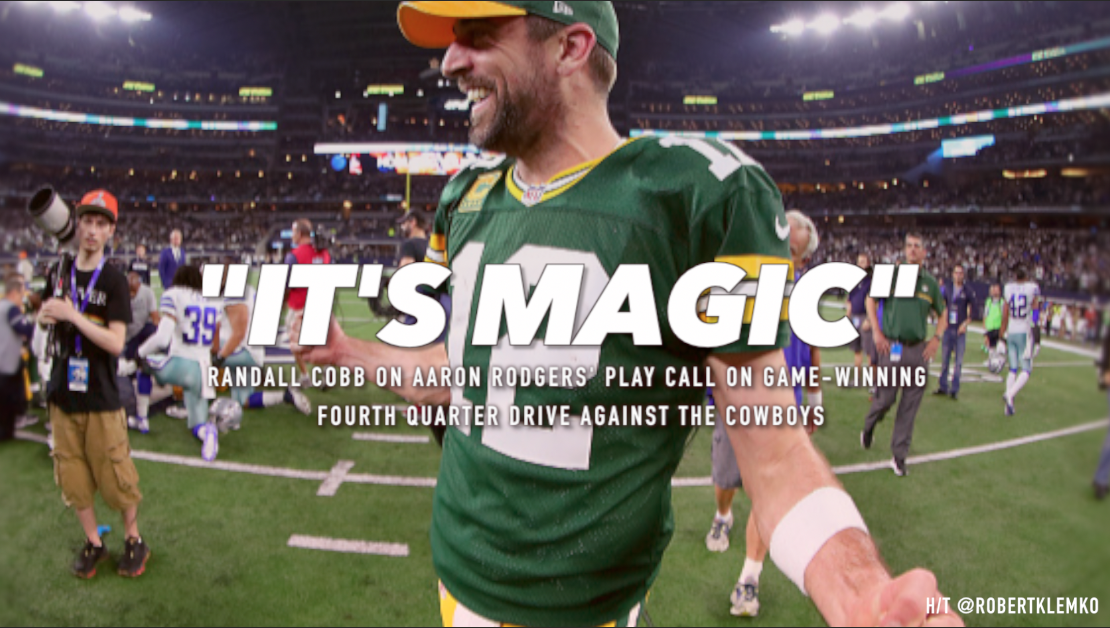 With 12 seconds left in the fourth quarter and facing a 3rd and 20, Aaron Rodgers needed to get the Green Bay Packers into field goal range. The game was tied at 31 and Rodgers did what he needed to do- he came up with — and executed — the perfect play.

No seriously, Rodgers actually made up the entire play in the huddle:

Cobb said the final play was not an actual playcall. Rodgers just told each receiver what to do, like a kid drawing in the dirt. Seriously.

Here’s the play itself:

The key part of the play was of course Jared Cook’s zig-zagging route all over the field towards the sideline. Not only was it impressive how Cook managed to get open, but due to the way the Cowboys rushed at Rodgers, the right-handed quarterback had to roll out to his left and throw across his body.

I said to Cobb, "that's ridiculous."

Oh, it was magic.

The conversion set up the real game-winning score as Mason Crosby kicked a 51-yard field goal to clinch Green Bay’s spot in the NFC Championship game:

It’ll be interesting to hear if more comes out about this play. Did Mike McCarthy let Rodgers come up with the play? Did Rodgers go rouge and against what his coaches wanted? If so, what was the original play the coaches wanted to run?

At the end of the day, the answers to those questions aren’t really important because Rodgers is a wizard and the Packers are moving on to the NFC Championship game.

The Atlanta Falcons will host Green Bay in the NFC Title Game on Sunday January 22nd at 3:05 pm EST in the final NFL game that will ever be played at the Georgia Dome.