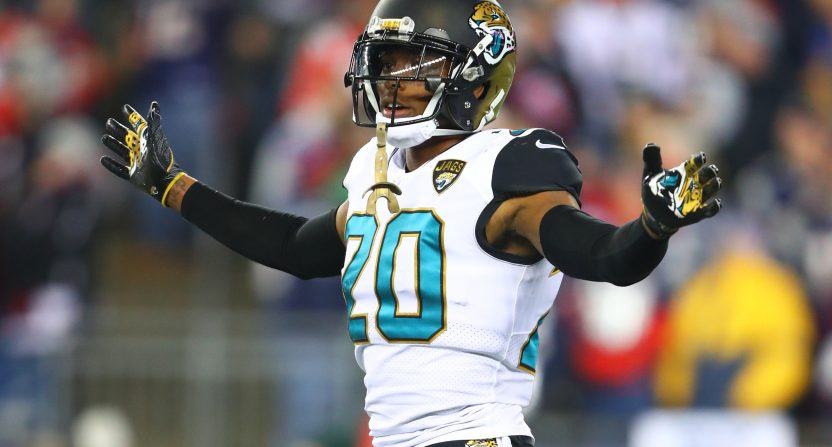 For years, the AFC South has been dominated by the Indianapolis Colts. Nine times since 2002 a season has ended with the Colts as the top team in the division.

But for the past three years, the division has been captured by other teams not loctated in Indianapolis. Last season, the Jacksonville Jaguars won their first ever AFC South crown and in 2015 and 2016, the division went to the Houston Texans.

This season, the AFC South actually has the possibility of being the most competitive division in the entire NFL. Each team is capable of coming out on top in 2018, it’s really just a matter of whose roster is able to remain the healthiest.

Is it possible that every team from the AFC South could win more games this season than the amount they finished with in 2017?

After their first few games last season, the Texans appeared to be on their way to a third-straight AFC South title. That was at least until the team was struck with the injury bug.

A number of key contributors missed significant time for Houston in 2017 including Deshaun Watson, J.J. Watt, Whitney Mercilus, C.J. Fiedorowicz, Ryan Griffin, and Derek Newton. The absence of these players ultimately led to the Texans finishing last season with their second-lowest win total since 2005.

Heading into this season, Houston appears primed to challenge for the top of the AFC South once again. Watson and Watt are expected to be ready by Week 1 and the defense beefed up their talent level this offseason with the additions of safety Tyrann Mathieu and corners Aaron Colvin and Johnathan Joseph.

If Watson can remain healthy for the majority of the year, there’s no reason to think that Houston is not capable of winning their third AFC South title in the last four seasons.

The last couple of seasons have been a bit of an anomaly for the Colts. After making 12 trips to the playoffs from 2002 to 2014, Indianapolis has not been a part of the postseason for the past three years.

With a new head coach in Frank Reich and the return of quarterback Andrew Luck from his strange, almost never-ending shoulder injury, the Colts have a decent shot at finding their way back into the playoffs this season.

But before they begin to think about the postseason again, Indianapolis has some major improvements to make on both sides of the ball. The Colts’ offense was one of the NFL’s worst at scoring points last year and their defense was one the worst in points allowed.

The defense may take a little longer to get back on the right path. But with Luck back under center, the Colts’ offense should be able to find it much easier to put points on the board this season.

Last year, the Jaguars definitely took a lot of people by surprise by finishing atop the AFC South. But good luck finding anyone on Jacksonville’s roster that was shocked by their 2017 performance.

The Jaguars earned their wins last season with a top ranked defense and a bruising rushing attack. As long as Doug Marrone remains Jacksonville’s head coach, expect this strategy to remain the same for 2018.

Holding the Jaguars back from being a true Super Bowl contender is who they currently have starting under center. Jacksonville quarterback Blake Bortles is basically the team’s spot-holder for the position until they find someone better to take his place.

The Jaguars should be among the NFL’s top teams in 2018. But until they land a more talented quarterback, any Super Bowl aspirations of theirs will have to be put on hold.

After getting a taste of the playoffs last season, the Titans loaded up with some new faces this year in an attempt to finish with an even better record in 2018. Along with the new additions to their roster, Tennessee also has a new head coach in Mike Vrabel and some rad new uniforms.

With Matt LaFleur leading the offense this year, Titans quarterback Marcus Mariota could be in for a breakout season. LaFleur has spent the last few seasons working with offensive masterminds, Sean McVay and Kyle Shanahan.

On the defensive side of the ball, Tennessee has a bunch of young playmakers like Derrick Morgan, Rashaan Evans, Kevin Byard, and Malcolm Butler. With Vrabel leading the way now, expect the Titans’ to be a little more physical on defense than they have been in recent years.

Tennessee will definitely be a team to watch in 2018. They might even have the talent to make a run at the Super Bowl.