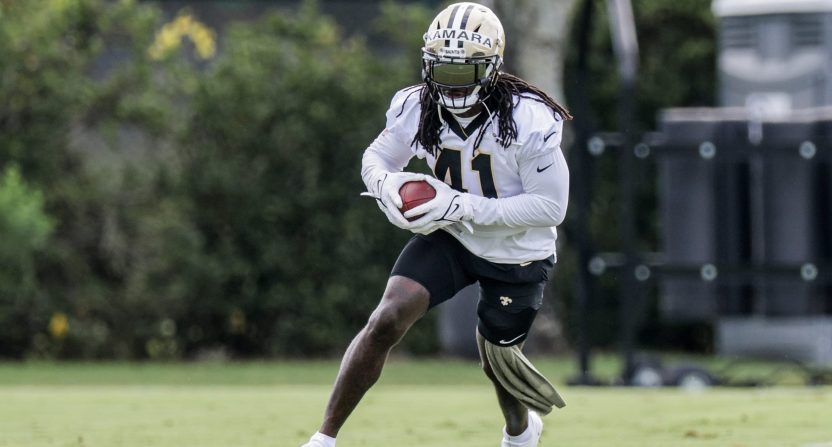 The New Orleans Saints are currently waiting on a verdict for star running back Alvin Kamara, following an altercation at a nightclub in Las Vegas after last year’s Pro Bowl which resulted in a battery charge against the five-time Pro Bowler.

A potential suspension is likely coming for Kamara (seen above at Saints’ training camp last week) at some point, but a decision on the court case made on Monday could have huge consequences as to when that suspension may play out.

There was supposed to be a scheduled hearing for the case on Monday, but David Charns of Las Vegas CBS affiliate KLAS reported Monday that that the case against Kamara, Kansas City Chiefs‘ CB Chris Lammons, and two other men has been pushed back for 60 days.

This is the second time that this case has been delayed, and this time it pushes into the NFL season, which is set to begin a little over a month from now. A decision like this raises questions about a suspension for Kamara could come during the middle of the season, or at some point in the 2023-24 NFL season.

Alvin Kamara’s next court date delayed another two months — and that isn’t even the beginning of a trial yet. So it could still be quite a while before any potential NFL discipline is decided. https://t.co/zhyB63cmdU

Increasingly likely nothing will happen in the Alvin Kamara case until October at the absolute earliest. Unless the video gets leaked. https://t.co/k2bhO8CLpN

This decision also comes on the same day as Cleveland Browns quarterback Deshaun Watson’s suspension, which was announced as six games by Judge Sue Robinson.

It was previously reported that Kamara was likely facing around a six-game suspension by the NFL, but considering Watson’s suspension is the same length, many around the NFL world believe this could mean that Kamara could get a less harsh punishment than Watson.

I have no idea how this pertains to Alvin Kamara’s situation but it seems like he should get much less than six games if a suspension comes. https://t.co/4bLVXLwfHg

Wild. Have to wonder how this lines up as precedent for Alvin Kamara's situation. Kamara's suspension (if he gets one) should be far less than what Watson is getting. https://t.co/9YkRW6oYaT

Kamara’s situation will obviously be worth monitoring moving forward. But it certainly appears like he will be suiting up for Saints’ first game of the season against the Atlanta Falcons unless something drastic happens between now and September.