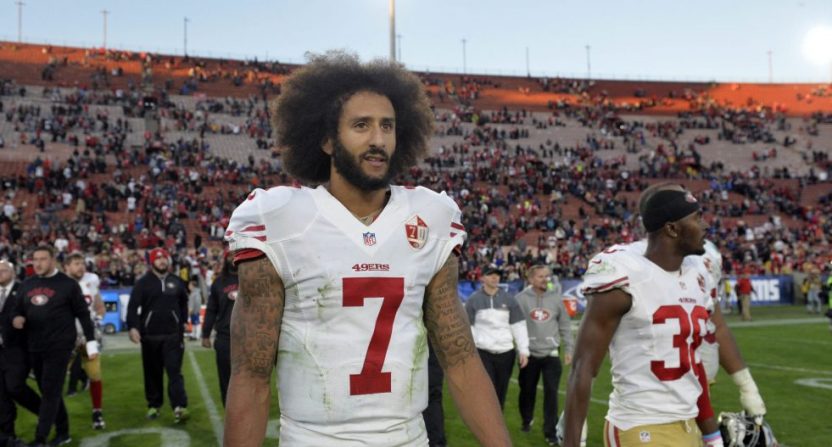 Colin Kaepernick’s case (filed last October) that the NFL’s owners colluded to keep him out of the league after his protests over the treatment of minorities in America is set to proceed to a full hearing. On Thursday, Arbitrator Stephen B. Burbank (appointed jointly by the NFL and the NFLPA to oversee disputes) ruled to deny the NFL’s request for summary dismissal of Kaepernick’s claim, as shown in a ruling tweeted by Kaepernick’s lawyer, Mark Geragos:

What does that actually mean? Well, it means that the next move is a full hearing (which could be held later this year), unless a settlement is reached before then. And it means that Kaepernick’s lawyers will be able to question league officials, owners and more. And some reporters like Yahoo’s Charles Robinson see it as a significant loss for the NFL:

What this means for Kaepernick is the arbitrator weighed the current evidence and essentially told the #NFL that its opinion of Kap not meeting a standard for collusion didn’t hold up in summary judgement. Basically, he’s seeing smoke. That’s a big win for Kaepernick’s side. https://t.co/C5MWAJMcmg

But as Ken Belson of The New York Times notes, while this is still “a major blow to the NFL,” the denial of the request for dismissal may be about the high profile of this case, not just the strength of the evidence Kaepernick has presented so far:

This summer, the N.F.L. asked the arbitrator to determine whether there was enough evidence to proceed. Arbitrators often allow cases to proceed to a hearing, but the Kaepernick case has attracted so much attention it would have been difficult for Burbank to dismiss it, as the league had hoped.

“Politically, if you’re the arbitrator, in a case as big as this is, there’s no way to throw it out,” said Charles Grantham, a former executive with the National Basketball Players Association who now teaches at the Center for Sport Management at Seton Hall University. “We knew that as soon as Donald Trump put his fingerprints on the issue.”

That’s an important element to consider here. Absolutely, seeing this case proceed is a loss for the NFL; they obviously would have preferred a quick finding in their favor that would let them say they didn’t collude to keep Kaepernick out, and the longer this goes, the more discussion of it there will be (which probably isn’t great for the league). But Kaepernick still faces a substantial challenge when it comes to proving collusion; there’s a pretty strong statistical case that he’s being deliberately overlooked, but proving sports collusion has usually required specific comments or documents spelling out owners’ plans to avoid a certain player, and it’s not clear if those exist in this case.

And as Belson notes, most sports cases alleging collusion haven’t resulted in wins for the players involved. Of course, there are exceptions, like the 1980s baseball one that ended in 1990 with a $280 million settlement and with 16 players being declared free agents. And it’s certainly possible that Kaepernick could pull off a win and be awarded the salary he’s missed out on, plus additional damages. It’s also possible, although perhaps unlikely, that the two sides could come to a settlement before a full hearing. But for now, all we know is that this saga is far from over.