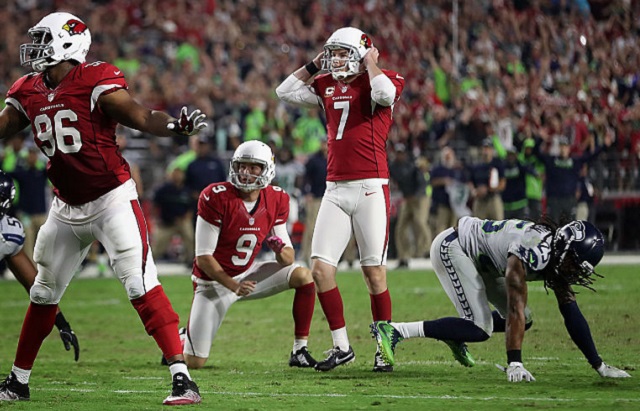 The Arizona Cardinals’ season was very much on the line in their Week 7 Sunday Night Football clash with the Seattle Seahawks. At 3-3, Arizona needed a big home win against their NFC West rivals to keep pace in the division race and move back to a winning record after a nightmare start to the season.

The Cardinals completed half of their goal on Sunday night, keeping pace with the Seahawks but unfortunately remaining at .500 with a 6-6 tie in one of the wildest primetime games in recent memory. Several miscues from the kicking game resulted in a heartbreaker for Arizona in a game that was theirs for the taking.

Chandler Catanzaro had a blocked field goal as well as a missed 24-yard chip shot in overtime that prevented Arizona from the win. Kicking blunders and anemic offense were the story of the game for the Cardinals, who just couldn’t put away the Seahawks despite an admirable effort from their defense.

The silver lining for the Cardinals is that the Seahawks also threw away the game with a kicking miscue of their own in overtime. Stephen Hauschka’s miss from inside the red zone kept Catanzaro slightly off the hook for his chip shot miss and sent both teams to the locker rooms with a bittersweet taste of a tie game in their mouths.

#ICYMI: This is how tonight’s game ended.

Both teams played so poorly on offense and missed so many chances in the game that the 6-6 tie ranked as the lowest-scoring tie in the history of the league. The defensive effort from the Cardinals and Seahawks also resulted in the worst offensive performance in a tied overtime game since the extra period was instituted in 1971. There hasn’t been a tie game in the NFL without a touchdown scored since 1972.

While the game was notable for casual fans, the tie might as well have been a loss for the Cardinals when it comes to their playoff hopes. Those hopes took a big hit, thanks to their kicker. A tie with the Seahawks doesn’t do the Cardinals much good in the early Wild Card standings.

Tonight was the 21st tie since the creation of overtime rules in 1974.

Currently, the Cardinals are 3-3-1 and sit behind nine teams in the NFC standings when you include the division leaders. That’s bad news for head coach Bruce Arians, who has a ton of ground to make up in a Wild Card picture in which he is at least one win behind the entire NFC East. At 4-2, the Eagles and Packers hold both Wild Card spots right now in the NFC. The Cardinals are within striking distance, but need a handful of big wins during a harrowing stretch of road games.

The Cards will play the Carolina Panthers (Week 8), Minnesota Vikings (Week 10), and Atlanta Falcons (Week 11) all on the road in a stretch that will determine their season. If the Cardinals can’t get the job done and build a winning record through that stretch, they are unlikely to be in the playoff race come December.

Arians appears to have one adjustment already in mind to improve his team. Post-game comments made about his kicker have indicated that Catanzaro could be on the chopping block because of his miscues. The Cardinals head coach didn’t spare any words when asked after the game about what he told his kicker after the soul-crushing miss.

Arians on what he told Catanzaro after the 24-yard miss: "Make it. He’s a professional. This ain’t high school. You get paid to make it."

Arians also had a gripe with the officials after a clear touchdown was not ruled as such after his team quickly snapped the football before a video review, but excuses will only get the Cardinals so far. Only wins can help their situation now, but the failure to end the game from inside of the five-yard line will haunt this team for the rest of the season.

With a challenging road slate ahead, the Cardinals’ playoff hopes are currently bleak after expectations of contending for a Super Bowl berth before the start of the season. Arizona needed a win over the Seahawks to get back in the NFC West race. But after a meltdown of epic proportions, the talk in Arizona will center around what is next after that primetime disaster. How Arians adjusts to improve a tepid offense and motivates his team after a heartbreaker will make or break their season. One thing is for certain, the Cardinals quest to bounce back from an overtime choke is likely not to involve their current starting kicker.