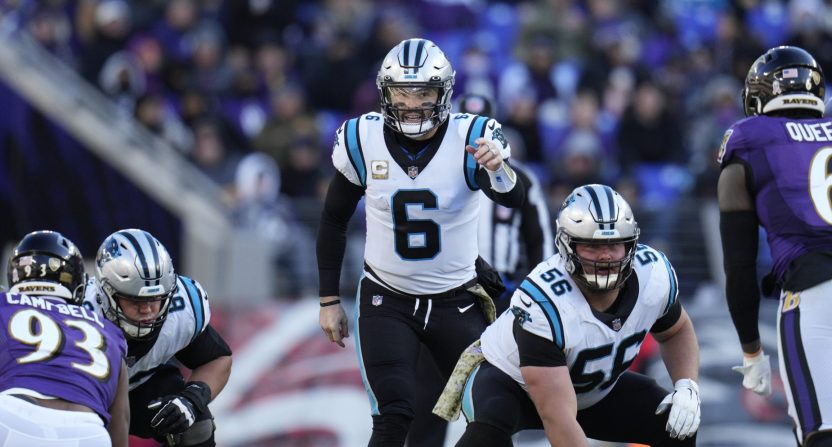 This Sunday, the Carolina Panthers will start Sam Darnold as their quarterback when they take on the Denver Broncos. That’ll make him the third different signal-caller to start for the franchise in the last three weeks.

While Baker Mayfield started for the Panthers at the beginning of the season, PJ Walker took over as the starter for a chunk of the year before Mayfield took the starting role back in Week 11. However, now that interim head coach Steve Wilks has gone with Darnold over Baker, the writing is on the wall for his future in Charlotte.

For his part, Mayfield, who came to Carolina via an offseason trade with the Cleveland Browns, seems at peace with what the future holds.

“There’s a lot of things up in the air for the future here, so I don’t really know,’’ Mayfield told reporters on Wednesday. “I’m doing what I can, what I can control. I know how my teammates feel about me and how I’ve handled things here. So, I can leave here with my head held high and understand that I did everything I could.’’

Mayfield threw for 196 yards and two interceptions in last week’s 13-3 loss to the Ravens.

“It is a crazy year,’’ Mayfield said. “There’s a lot of strange things happening [at quarterback around the league]. . . . The quarterback room has pretty much handled it in the best way possible, rolling with the punches. We’re just doing what we’re told.’’

Mayfield becomes a free agent at the end of the season and it’s almost assured that he’ll try to sign with a different team in 2023.