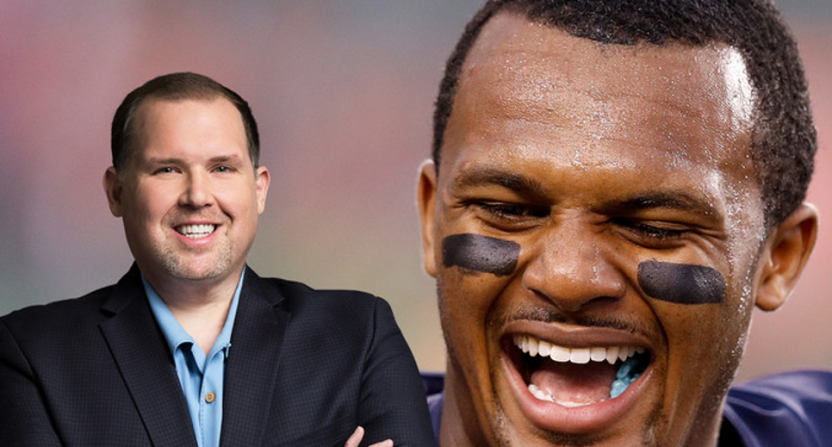 If you’re Fox Sports Radio overnight host Ben Maller (he works the 2 to 6 a.m. Eastern shift), your own opinions are apparently facts, and an athlete who dares to respond to your over-the-top criticism is “thin-skinned.” Maller picked a fight with Houston Texans’ quarterback DeShaun Watson (another one; he previously went at Watson ahead of last year’s draft, and has blasted him for all sorts of things since then, including saying that Watson “whored himself out” on Radio Row) with some comments on his show early Monday, saying that Watson “ain’t going to be around very long” and the Texans should look to draft another quarterback. The Fox Sports Radio account dutifully tweeted this take out, and it got to Watson, who reacted Tuesday by calling Maller a “clown”:

On Wednesday morning’s show, Maller spent 13 minutes on this, first complaining about the criticism he’d received from Houston fans in the wake of Watson’s tweet, then saying that he doesn’t even remember what he talks about the night before, and then saying his take was “just a fact” and Watson was “thin-skinned”:

The “I try to block the show out, it’s part of my therapy; when I leave the studio, I try to forget everything that happened” intro seems absurd, and doesn’t exactly indicate someone who believes in the takes he’s tossing out there. Beyond that, this really heats up around the 2:00 mark, where Maller tries to defend his initial argument about Watson:

“We pointed out, accurately, that DeShaun Watson is not long for the NFL. Why is that? His body cannot handle the rigors of the National Football League. That’s not really an opinion, that’s a fact, considering how many games he missed last year, going back to college. Any reasonable person would come to that conclusion based on a small sample size.”

It’s nice that Maller admits it’s a small sample size, helping to shoot further his already-weak argument in the foot. And “going back to college”? Watson played in all 15 games Clemson had in both 2015 and 2016, which doesn’t exactly scream “injury risk.” Yes, Watson suffered numerous injuries in his freshman season of 2014 and only played in eight games that year, but it feels like a stretch to use that as “he’s injury-prone!” after two seasons where he played every game and led his team to two national championship games, winning the second one.

And yes, Watson tore the ACL in his right knee in practice this past year with the Texans (in 2014, he tore the ACL in his left knee, and somehow managed to play on it), but that’s zero proof of the supposed “fact” that “his body cannot handle the rigors of the National Football League.” (Props to Maller for further making his take worse with a pronouncement about “The National Football League.”) And plenty of NFL players have overcome ACL surgery and gone on to further success; it has  led to shortened careers and diminished performance for some, but it’s far from a certain career-killer, especially considering that Watson is only 22.

Oh, and Watson can’t even be described as small or frail; he’s listed as 6’3”, 215 pounds. So it’s hard to picture just why Maller thinks “any reasonable person” would come to the conclusion that Watson’s body “cannot handle the rigors of the National Football League.” That doesn’t feel like a reasonable conclusion at all. (Maller is the guy who called LeBron James’ neck injury during the Celtics’ series “a gift from the heavens” and “the most convenient fall guy you could possibly have,” though, so he isn’t necessarily an injury expert.)

But it gets even sillier after that. Around 3:00, when describing Watson’s tweet, Maller says “Watson responded to the Fox Sports Radio Twitter feed calling me a clown. How dare he! I am the greatest f-ing clown you’ve ever seen! You think Krusty the Clown’s good, I’m better than that! …So here’s the question, how should I feel about an injured NFL quarterback, who has yet to make it through an entire season, calling me a clown? Let me tell you something; I’m flattered. Let me tell you why I’m flattered; clowns are very valued members of society.” Well, alrighty then.

At 4:20, Maller says “Watson, like a lot of professional athletes, has surrounded himself with cheerleaders.” Well, he probably hasn’t surrounded himself with less-than-intelligent radio hosts who think one injury spells certain doom for a career. Maller later says “He’s a deity, right? Fawned over by media fanboys, they love him!”

That would probably be news to Watson, who saw hot take after hot take during his college career, including Skip Bayless calling him “timid and lifeless” and saying he had “lost his way” during the 2017 championship game Watson wound up playing a huge role in winning, throwing for 420 yards and four touchdowns. Oh, and Watson also took plenty of criticism ahead of the draft (something very familiar for many black quarterbacks), and plenty of criticism after the draft when the Texans decided to start Tom Savage instead of him to begin the season. So he isn’t exactly unused to critics, but when he does get a chance to play, he’s often shut them up.

And Maller calls those who have praised Watson “delusional dolts”: is it really that delusional to be impressed by someone who threw for 1,699 yards and 19 touchdowns in his first seven games, only six of which were starts? Maller might want to want to tell that to the people who voted Watson the NFL offensive rookie of the month and the AFC offensive player of the month in October. Or the NFL players who ranked him 50th on the player-voted Top 100 player list this offseason. Delusional dolts, one and all.

Nah, the real dolt here is a guy who decides without much evidence that Watson “cannot handle the rigors of the National Football League,” and someone who thinks that Watson objecting to that is “thin-skinned.” USA Today‘s Luke Easterling summed that up well:

Just FYI: When you try to come at a pro athlete, and they laugh at you, they’re not “thin-skinned.” @deshaunwatson was amused by this ignorance, not offended by it, lol. https://t.co/Y7Z0pxf4cX

Indeed. If Maller wants to see someone thin-skinned, he should look in the mirror. Watson’s not the one who spent 13 minutes responding to a reasonable criticism of a ridiculous take.