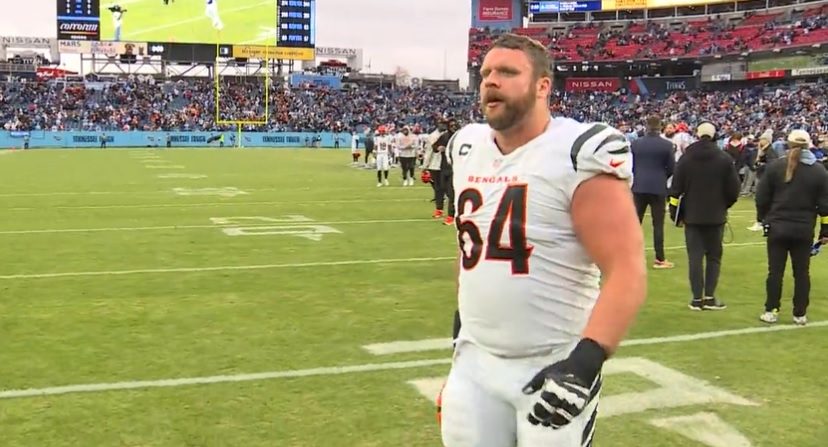 Center Ted Karras was not yet with the Cincinnati Bengals when they defeated the Tennessee Titans in the Divisional Round following the 2021 season. But after Week 12’s meeting between the two teams, it’s safe to say that Karras is invested in the rivalry.

Karras and the Bengals defeated the Titans 20-16 in Nashville on Sunday. After the game, Karras was walking off of the field. He acknowledged the Cincinnati fans who had come to support the team on the road, putting his arms up in the air and yelling “F**k yeah.”

The veteran lineman then said “Right up yours, Tennessee. F**k you. F**k you.”

WATCH the most excited Bengal of them all (Karras) leaving the field and GIVING IT to Titans fans, this is AWESOME #Bengals #WhoDey pic.twitter.com/Dqea5XYHb8

Mark Slaughter, who posted the video, later shared that he felt Karras was responding to particularly hard comments, such as “I hope you break your leg [Joe] Burrow.”

Whatever the reason for Karras’ response, it was largely well-received.

Ted Karras is legit one of the nicest guys I’ve ever met. This is hilarious. https://t.co/S9w1abL1L1

While not as significant as January’s playoff victory, Sunday’s win was huge for the Bengals. Cincinnati is now 7-4. That win, coupled with the Jacksonville Jaguars upsetting the Baltimore Ravens, means that the Bengals and Ravens are tied atop the AFC North. Presently, Baltimore has the tiebreaker but the two teams will play again in Week 18.

And if the Bengals do get back to the playoffs, we can only hope to see another game against the Titans. If nothing else, we know that the game would have intensity — and a lot of it.