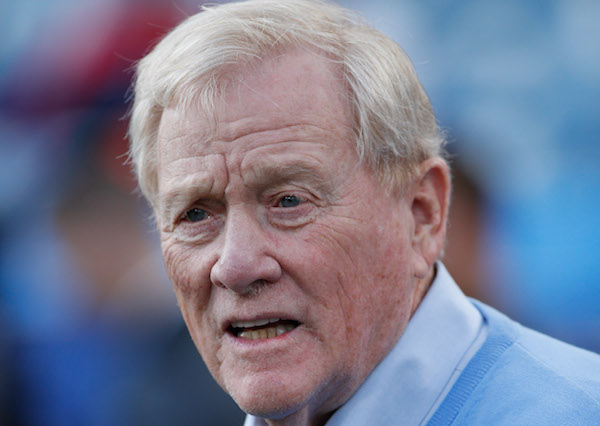 As an NFL executive, Bill Polian has achieved the highest honors possible. He’s been recognized multiple times as Executive of the Year, been a Super Bowl champion, and is a member of the Pro Football Hall of Fame.

But since becoming an NFL analyst for ESPN in 2012, Polian has proven time and time again that his opinions are embarrassingly out of touch.

Did I just hear Bill Polian say Lamar Jackson is “short”? Since when is 6’3” too short for QB? I find it hard to believe he’s giving an evaluation of a player & he doesn’t know their height. He’s either never seen Lamar in person or is just making excuses for him not to play QB. pic.twitter.com/YmFZokHfT7

Polian’s recent comments about Jackson are just the latest in a long line of ludicrous statements regarding prospects, current NFL players, and former players as well.

A year ago, the former executive said that he didn’t believe Terrell Owens or Randy Moss should ever be voted into the Pro Football Hall of Fame. Excuse me?

Owens finished his career with the second-most receiving yards in NFL history and Moss has more career touchdown catches than anyone not named Jerry Rice.

Before last year’s draft, Polian also said that he would rather have Cincinnati Bengals backup A.J. McCarron than any of the young quarterbacks available in the incoming class. McCarron had three career starts in three years at that point in time and was unable to dethrone Andy Dalton as the Bengals’ starter.

Speaking of Dalton, if not for passing on him in the 2011 Draft, Polian believes he would still be working for the Indianapolis Colts today. Yes, he really did say that.

In 2015, Polian said that when he was working for the Colts, the team had a first-round grade on Tom Brady. Not only did Brady not get drafted in the first round of the 2000 NFL Draft, the quarterback didn’t get taken off the board until the the New England Patriots took him with the 199th pick in the sixth round.

Indianapolis had Peyton Manning as their franchise quarterback in 2000, but Polian and the Colts would have probably snatched Brady earlier than the sixth round if they truly felt he was worth a first-round selection.

Back in 2014, Polian said Johnny Manziel, “has magic,” and the Browns should have taken him with the fourth overall pick in the 2014 NFL Draft. Everyone knows how that turned out, including the Caron Treatment Center in Wernersville, Pennsylvania.

Hopefully, this is enough to get the picture. There is really no other way to say this, but Bill Polian is literally losing his mind.

A number of people at his age (75) have proven to still be high functioning in both the physical and mental aspects of their lives. Polian may still be able to move around fine, but clearly his mind is leading him to believe things that are just borderline insane.

Many appreciate him and what he has done for the league during his time as an executive. That appreciation level would increase to an even higher level if Polian decided to end his time as an NFL analyst sooner than later.

1 thought on “Bill Polian, do everyone a wonderful favor and please stop talking”