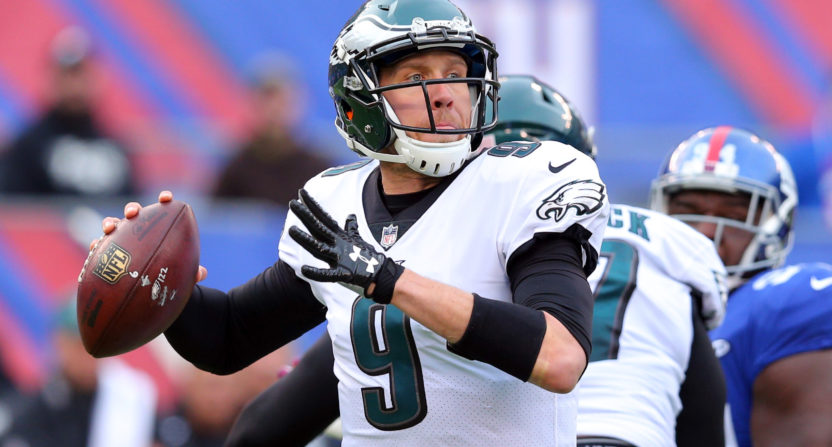 The 2017 NFL regular season is nearing its end, with each team down to its final two games. Amazingly, eight of the 12 teams currently in playoff spots weren’t in the postseason a year ago, including each of the top five seeds in the NFC.

New England just has to beat two mediocre teams at home to lock up home field throughout the AFC playoffs, but a slip up against Buffalo or Miami could be costly because the Steelers aren’t likely to lose to the Texans or Browns. The Jaguars are still also in contention for the top seed, but they have to win out and hope both New England and Pittsburgh lose at least once apiece.

Jacksonville could also still settle for a wild-card spot if it loses out and the Titans win out, but Tennessee is sliding and has a tough schedule to close out the regular season. If anything, the Titans are just trying to hold on for dear life in a wild-card battle with the Bills and Ravens. The Chargers are probably toast, but can still sneak into a wild-card spot or steal the division from Kansas City.

Baltimore’s schedule is too easy. The way I see it, the final wild-card spot either goes to Buffalo (likely to finish 1-1) or Tennessee (likely to lose to the Rams, but might have a chance to beat the Jags if Jacksonville has nothing to play for in Week 17). That Jags-Titans game might decide if Tennessee or Buffalo lands the No. 6 seed, but I don’t trust the Titans to beat the Jaguars in any situation right now. The Chiefs should hold on with finishers against the Dolphins and Broncos, and the Pats and Steelers are both likely to win out.

Philadelphia will almost certainly win 13 or 14 games and earn home-field advantage throughout the NFC postseason, while Minnesota is likely to earn a first-round bye even with a 1-1 finish. Wouldn’t be surprised if the Vikes won out, though. The Rams are also likely to win out and grab the No. 3 seed, while the Saints have the head-to-head tiebreaker with surging Carolina.

Things get very interesting if the Falcons beat the Saints in Week 16, especially with Carolina and Atlanta playing in Week 17. Detroit, Seattle and Dallas are all factors if any of those NFC South teams (especially Atlanta) slip up, which is why this week’s Seahawks-Cowboys game could be very interesting.

Philly will probably crush the Raiders and then let up against Dallas, who I think also beats the Seahawks and finishes 10-6 but still falls short. That’s because those NFC South teams should all have at least another win in them, especially the increasingly hot Falcons.

I think it’s pretty clear how this plays out, with the Eagles, Vikes and Rams capturing the top three seeds (the tiebreakers even go in that order) and then the top three NFC South squads taking the next three spots, in an order that remains completely up in the air.