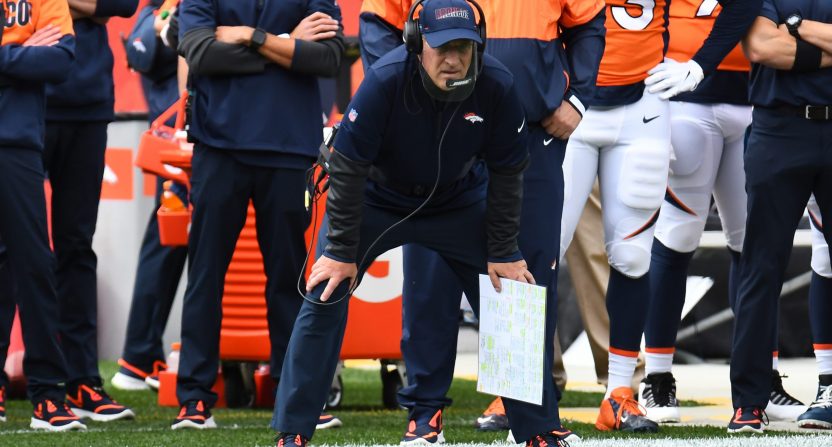 In the wake of the Tennessee Titans’ ongoing COVID-19 testing issues and the postponement of the Patriots-Chiefs game last week, it’s become abundantly clear that positive tests and game postponements aren’t going away anytime soon. That fact was driven home on Sunday when news broke that the Week 6 game between the New England Patriots and Denver Broncos would be postponed following another positive test on the Patriots’ side that shut down their facilities for the third time in 10 days.

The league already has the Titans-Bills game rescheduled for Tuesday, assuming it actually happens and someone from Tennessee doesn’t test positive again. It sounds like, if that plan holds, the Broncos and Patriots will now play next week and will have to use this week as their bye week. That will also push some other games around for Denver as they lose their scheduled bye week in Week 8.

Here’s the plan, per sources, which is tied to Tennessee being able to play:

🏈Week 8 (what was supposed to be Denver bye): Chargers at Broncos.

Some of the Denver players, upset about the perceived lack of care that New England has taken to quarantine and ensuring they can play football, took to social media to voice their displeasure with the situation. After spending the entire week practicing and game-planning, they are understandably annoyed that they’ll have to scrap their upcoming bye week and start over.

Injuries at an all time high and our bye week was burned up with practices. https://t.co/4Z11ZBTi2D

IM HOT ON GOD I AM

When asked about the player comments, Denver head coach Vic Fangio seemed a bit ticked off by the tone, implying that anyone who was complaining on social media or otherwise was a “whiner” or “bitcher.”

Fangio: “In a weird way I’m kinda happy to see some of this stuff happen. Because you see who the whiners are, who the (b’ers) are and who can’t handle adversity. And I’m going to try hard the Denver Broncos don’t fall under any of those categories.” #9sports

“I’m fully prepared to react and improvise, no matter what happens,” Broncos head coach Vic Fangio said Sunday, despite his players’ complaints. “And in a weird way, I’m kinda happy to see some of this stuff happen. Because you see who the whiners are, who the bitchers are, and who can’t handle adversity. And I’m gonna try hard that the Denver Broncos don’t fall into any of those categories.”

There might be some fireworks to come out of Denver, as the Broncos sit at 1-3 in Fangio’s second season at the helm, and battle lines are being drawn. Still, it does sound like Fangio has already spoken with the team already.

At 8:15 this morning, Vic Fangio held full team meeting on practice field. Face to face, no Zoom (but socially distanced). He reinforced how he believes the Broncos can handle this adversity. #9sports

Fangio told reporters that players will have Monday and Tuesday off before returning to work on Wednesday to prepare for the Patriots game…again.

Fangio on no bye: “I was prepared for this. We’re going to roll with the punches and adjust.” #9sports

Per ESPN, the Patriots had three straight days without a positive test result before Sunday’s shutdown. So don’t write that make-up game in black ink for next weekend just yet.