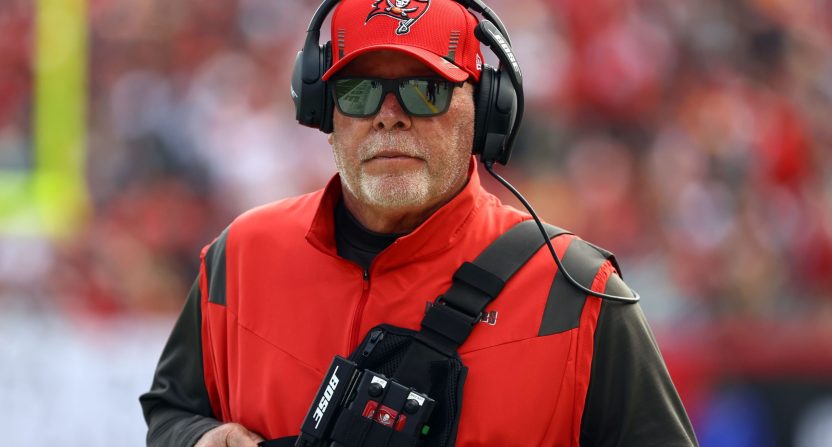 In March, Bruce Arians announced his retirement from coaching after winning a Super Bowl with the Tampa Bay Buccaneers the year before. In his place will be defensive coordinator Todd Bowles but Arians will remain with the team as a senior football consultant.

While things are still a bit up in the air, Arians explained his new position to Ira Kaufman and Clark Judge of the Eye Test For Two podcast.

“It’s a ‘What do you think?’ job,” Arians said. “Everybody asks me what do I think and they know they’re getting a brutally honest answer, whether it be Joel Glazer, Jason Licht, Todd Bowles or Byron Leftwich. It’s been fun going to practice, watching and learning some more, watching us change, looking at the new guys. Man, that draft class is going to be a home run. Looking forward to getting to camp.”

“That’s the beauty of my job,” he says. “I get to be in the locker room, get to be around the coaches every day and still have a big hand in the draft. The relationships were always the biggest thing for me. Building a new team, watching the new guys come in. Now, Sundays might be different sitting upstairs. I might be able to still holler loud enough to cuss out the refs from up there.”

Yeah, that’s pretty much what a consultant does. A coach dialing things back and being a consultant can be a good idea but if that coach winds up having an issue with not having as much control as he used to, they could meddle too much and cause a rift in the team.

That doesn’t seem to be the case for someone like Bruce Arians. Arians seems like someone who’s willing to give his input but also knows to step back and let the people do their job. If that can be done, Arians will be a valuable contributor to the Buccaneers.