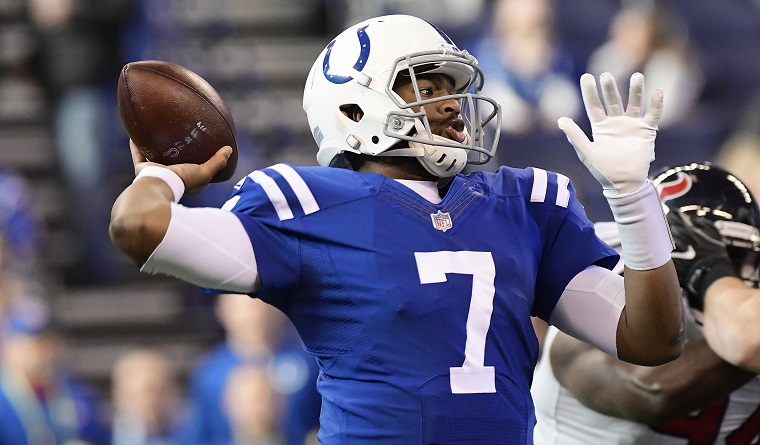 The 2017 NFL regular season is over. Many players did great things, such as Tom Brady, Carson Wentz, Todd Gurley and more. But what about those people who were less than exemplary?

If there’s a best, there also has to be a worst. And the NFL provided plenty of bad during the past season. Before forgetting, let’s remember some of the worst the NFL had to offer from the past 17 weeks.

Jacoby Brissett, QB, Indianapolis Colts: In fairness, Brissett was brought in by the Colts right before the start of the season to help them get through a year without Andrew Luck. Expectations were low and he lived down to them.

Brissett is only 24 years old and this was his first season as a starter. He also had to play behind the same offensive line that ruined Luck’s shoulder. Sacked a league-high 52 times, he should have qualified for hazard pay.

But the numbers are the numbers and the numbers were mostly terrible. Brissett was arguably the worst starting quarterback in the NFL. The best thing you can say about his season? He didn’t turnover the ball: only seven interceptions. Brissett was 22nd in the league in passer rating (81.7), but a deeper dive into the advanced metrics tell a more harrowing story. FootballOutsiders.com rated Brissett as 28th among quarterbacks and he was 28th in QBR as well.

The worst indictment of Brissett is that he quarterbacked the third-lowest scoring team in the NFL with 263 points.

In 2016, O’Brien overcame the embarrassing signing of Brock Osweiler to get the Texans to the playoffs. This season, O’Brien opened the season by deciding that Tom Savage was his best option as the starting quarterback. Deshaun Watson was eventually thrust into making his starting partially due to Savage suffering an ankle injury. The decision to start Savage looked even worse as Watson got off to the greatest start by a NFL rookie in league history (103.0 passer rating). His performance at Seattle was jaw-dropping (402 passing yards, 4 TDs, 3 INTs and 67 rushing yards).

Watson might have won that game if not for his head coach. O’Brien’s conservative play-calling allowed Seattle to get the ball back and Russell Wilson to win it at the end. He also played it safe against New England, which allowed the Patriots to rally. This is not second-guessing. These were fairly obvious decisions when facing two quarterbacks with the pedigree of Wilson and Tom Brady.

Sashi Brown, Executive Vice President, Cleveland Browns (fired): The Cleveland Browns were expected to be bad – but 0-16? When you go winless, it’s a complete organizational failure – from the owner to the general manager to the coach. The Browns have terrible ownership, but the sketchy Jimmy Haslam isn’t going to fire himself. The first on the chopping block was Sashi Brown – and justifiably so. He’s more responsible because he put together this roster.

What makes it worse is that the new general manager, John Dorsey, had this to say about the Browns: “The guys that were here before, they didn’t get real players.” Ouch! Now, Brown’s job was to build for the future by getting young players and accumulating assets. According to The Big Lead, Cleveland had 72 starts from rookies in 2017.

Perhaps rookies pass-rusher Myles Garrett, quarterback DeShone Kizer and safety Jabrill Peppers will develop into stars. Maybe the Browns will land impact player with the first and fourth overall picks in the 2018 NFL Draft. But based on what we know now, Sashi Brown didn’t acquire good enough players in a results-based business.

Los Angeles Chargers: You should feel terrible for Philip Rivers. Since becoming the Chargers starting quarterback in 2006, Rivers has lost 26 games by three points or less. That’s extraordinarily bad luck. This year was more of the same as Rivers went 1-3 in such games.

Corey Davis, WR, Tennessee Titans: The Titans made Corey Davis the fifth overall pick in last year’s draft. At Western Michigan, Davis set an FBS record with 5,278 career receiving yards. But as a pro, Davis was virtually a non-factor. He finished the season with 34 catches for 375 yards and no touchdowns. He didn’t catch a pass in the regular-season finale, hindered by a hamstring injury.

Nathan Peterman, QB, Buffalo Bills: Coach Sean McDermott is getting praise for guiding Buffalo to its first playoff appearance since 1999. But never forget this was the same coach who benched reliable Tyrod Taylor in favor of rookie Nathan Peterman. Peterman threw five interceptions in the first half against the Los Angeles Chargers.

Browns QB sneak at Detroit: Cleveland trailed 17-10 late at the Lions 2-yard line with 15 seconds left and no timeouts. At worst, the Browns should have come away with a field goal. Instead, inexplicably, Cleveland rookie DeShone Kizer attempted to surge ahead for what would have been the game-tying score. Instead, this happened:

Chicago fumbled while trying to score on a return of a blocked field goal. One of the best feelings a team can have is blocking a punt. One of the worst is failing to score right before reaching the end zone. The Bears felt ecstasy and agony on the same play, courtesy of Marcus Cooper. Fortunately for him, Chicago beat Pittsburgh 23-17 in overtime.