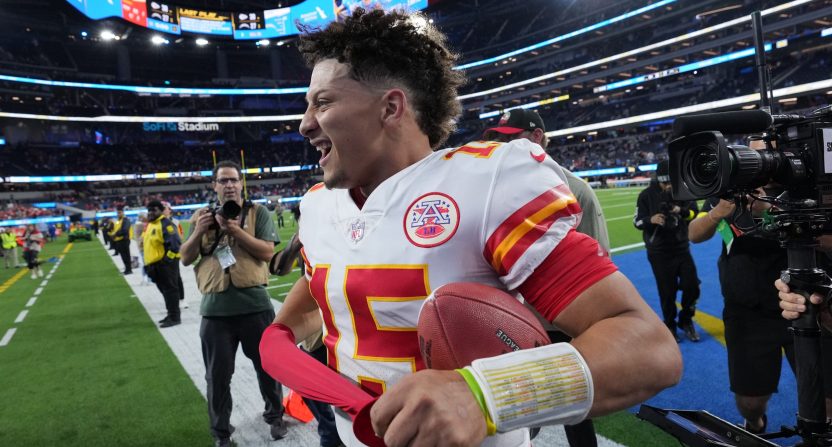 The Kansas City Chiefs were able to defeat the Los Angeles Chargers on Sunday Night Football thanks to an impressive game-winning drive from star quarterback Patrick Mahomes.

This win was huge for Kansas City, propelling them to 8-2 on the year, and continuing Mahomes‘ and the team’s dominance of the AFC West division.

Since entering the league in 2017, the former NFL MVP award winner has posted a 24-3 record against the AFC West, as noted by Fox Sports personality Nick Wright.

Perhaps even more impressive is that Mahomes has not lost a road game against an AFC West opponent in his career.

This win also speaks to the excellence that the Chiefs have been able to show down the stretch of the year, marking the 25th consecutive victory in the months of November and December.

Many around the NFL world took to social media to express their disbelief at these insane stats that Mahomes has put up in recent years.

This is absolutely absurd. https://t.co/Fsjdq6m5oF

This is absolutely amazing. https://t.co/0fhZC8tAO0

These statistics speak to not only how great Mahomes is as a player, but also how great star tight end Travis Kelce is along with the excellent coaching of Chiefs head coach Andy Reid.

Many thought that Kansas City may struggle a bit this year offensively due to the departure of star wide receiver Tyreek Hill last offseason to the Miami Dolphins.

Not only has that not happened, but the Chiefs may be even more dangerous this season on offense without Hill on the team.

The Chiefs rank first in the NFL in a number of key offensive categories, including yards per game and points per game on the year.

They’re clearly a dangerous team for anyone in the NFL and will likely be among the top contenders as we get closer to the postseason.