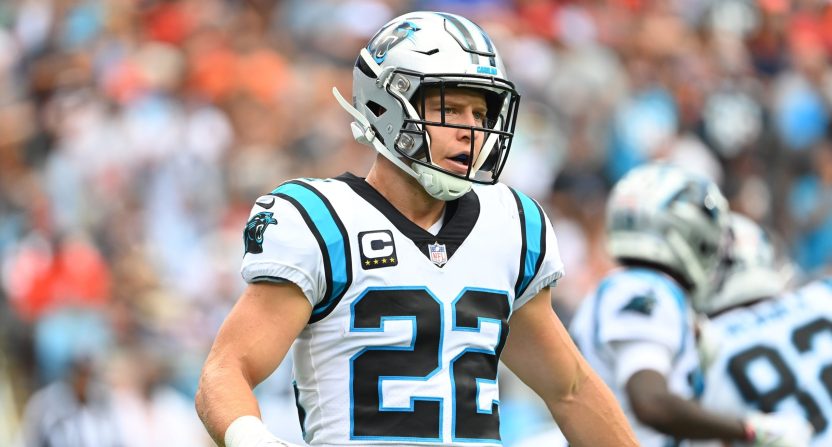 The status of Carolina Panthers star running back Christian McCaffrey has been in question over the last few days after he didn’t practice on Wednesday and Thursday due to a thigh injury.

That immediately sounded the alarms for Panthers fans, as well as fantasy football managers that have McCaffrey (who was a consensus top-two draft pick). McCaffrey was limited to just 10 games over 2020-21 due to injuries, so the latest injury concerns led to “here we go again” thoughts from the NFL world.

However, there’s optimism on that front ahead of the Panthers’ game on Sunday against the Arizona Cardinals.

ESPN’s Adam Schefter reports on Saturday night that McCaffrey “is likely to play vs the Cardinals, per source.”

Panthers’ RB Christian McCaffrey, listed as questionable for Sunday due to a thigh injury, is likely to play vs. the Cardinals, per source. McCaffrey missed two practices last week, a sign he might not be at full strength.

That would certainly be fantastic news for the Panthers and fantasy football managers.

After being selected by the Panthers with the No. 8 overall pick of the 2017 NFL Draft out of Stanford, McCaffrey looked worth the selection over his first three seasons. And that was capped off by a ridiculous 2019 season, in which he ran for 1,387 yards (4.8 AVG) and 15 touchdowns, while reeling in 116 receptions for 1,005 yards (8.7 AVG) and four touchdowns.

McCaffrey is crucial to the Carolina offensive attack, especially with quarterback Baker Mayfield struggling in his first season with the Panthers.