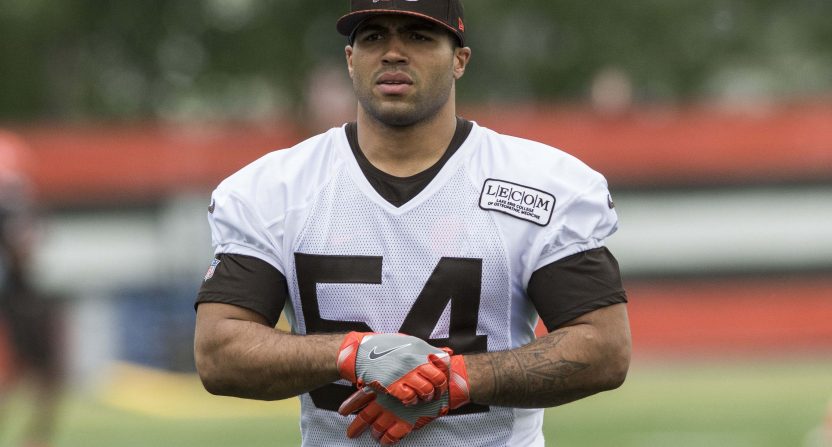 The Cleveland Browns announced Wednesday evening they were releasing linebacker Mychal Kendricks, who earlier in the day was charged with insider trading.

In a statement, Kendricks had admitted fault:

“I would like to apologize. Four years ago, I participated in insider trading, and I deeply regret it. I invested money with a former friend of mine who I thought I could trust and who I greatly admired.

…“Since the beginning of the investigation, I have fully cooperated with the authorities and will continue to do so. I accept full responsibility for my actions. Although I did not take any of the profits for myself, I am committed to repaying all of the funds gained illegally and accept the consequences of my actions.

“I sincerely apologize to my coaches, the owners, and my teammates on the Eagles and the Browns, the NFL, and the magnificent fans to whom I owe my career. I also apologize to my family, who I have failed in this. You all deserve better, and I will work my hardest to re-earn your trust and respect, serve as an advocate to educate others, and show you that I will never be involved in anything like this again.”

You can read more about the charges in our post earlier, but there’s been a pretty big development this evening:

The Browns released Kendricks, and his future NFL employment remains up in the air, especially if prosecutors get the jail time they’re apparently seeking. The Browns signed Kendricks this summer to a one-year deal, and in their statement, seem to suggest they had no idea about the nature of the financial dealings:

Prior to signing Mychal, we were informed that there was a financial situation that he had been involved with in 2014. We were told Mychal had fully cooperated with investigators as a victim. From what was communicated at that time and based on the numerous questions we asked and further due diligence on our part, including checking with the league office, there was no information discovered that conveyed otherwise.

Recently, we were provided an update on the matter and the circumstances have changed. We are now dealing with a different set of facts and the additional information we’ve gathered has led us to the decision to release Mychal from our team. Due to the ongoing legal nature of this situation, we will have no further comments.

So, to recap: NFL teams are more than fine keeping domestic violence offenders around, but a white collar issue means instant release.

It’s important to remember that the Browns are owned by Jimmy Haslam, whose Pilot Flying J truck stop company had to pay $92 million to avoid being prosecuted in the wake of a price-fixing scheme. If you go to Haslam’s Wikipedia page, you might not notice that; it’s buried as one sentence, right before we get to his community involvement.

It definitely did happen though:

Pilot Flying J entered a criminal enforcement agreement, the US Attorney’s Office for the Eastern District of Tennessee says in a July 14 press release.That means the company has accepted legal responsibility for its employees’ criminal conduct, which cost customers more than $56 million, the US Attorney Office says. In return, the US government will not prosecute Mr. Haslam’s company as long as they abide by the agreement.

Customers were cheated out of discounts in two ways: Pilot either fraudulently reduced the monthly rebates or reduced off-invoice discounts. Pilot has also acknowledged its employees engaged in other criminal behaviors, such as supervisors teaching employees how to reduce customers’ rebates during training in November 2012, according to the agreement.

So, if you want to commit white collar crimes and keep your NFL job, remember: be an owner.

1 thought on “The Cleveland Browns, owned by a man whose company paid $92 million to avoid prosecution, release Mychal Kendricks”