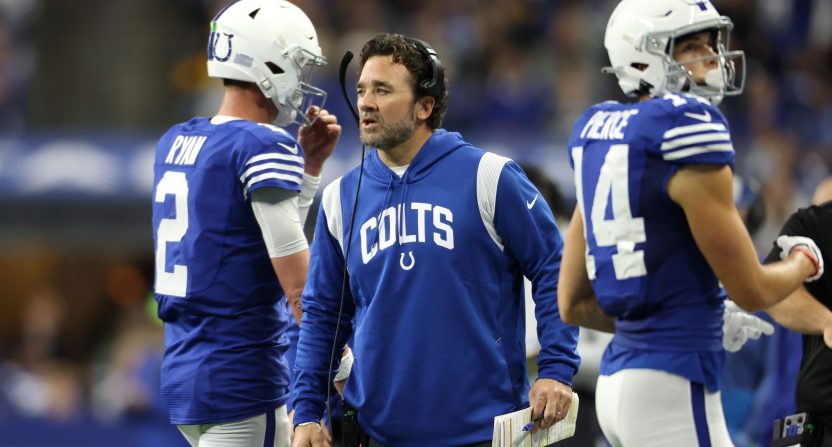 The Indianapolis Colts received a ton of criticism for their hiring of interim head coach Jeff Saturday due to the former NFL center having never coached above the high school level entering the job. This inexperience reared its ugly head on Monday night against the Pittsburgh Steelers.

Pittsburgh took the lead in the fourth quarter of the game on a rushing touchdown along with a successful two-point conversion to take a 24-17 lead.

Benny Snell Jr. with a nifty run to give the Steelers the lead! 🏈#MNF pic.twitter.com/A6SpWEMDOE

Kenny Pickett to George Pickens for the 2-point conversion!

"We might be seeing this combination for a while."- Troy Aikman

After a number of failed drives from both sides, the Colts and quarterback Matt Ryan had one more opportunity to tie the game late in the fourth quarter.

On the following play, Ryan was sacked by Steelers pass rusher Alex Highsmith. Most coaches would have called a timeout to stop the rolling clock, but Saturday let his team play on.

They then called a pass play, resulting in a surprising 14-yard scramble from Ryan. Saturday and the Colts still decided not to call a timeout after the play.

This led to a frantic run play to star running back Jonathan Taylor, which was shut down for no gain by Pittsburgh.

Some, uh, bizarre clock management by Jeff Saturday and the Colts on their final possession. 🏈🤔 #MNF pic.twitter.com/RunHFlFHY8

A timeout was finally called by the Colts with only 30 second remaining in the game.

Indianapolis could have made up for this poor clock management with a fourth-down conversion, but the attempt ultimately resulted in an incompletion, leading to a Steelers victory.

This drive certainly could have been handled better by Saturday, which fans pointed out on social media.

Jeff Saturday having three timeouts and letting a minute bleed off the clock pic.twitter.com/R9sJqdX0E1

When Jeff Saturday doesn’t use his timeouts pic.twitter.com/dVzkyzO4uf

I don't buy these excuses for Jeff Saturday not calling timeouts. Maybe in his 2nd week as coach. But 3rd week? He should know better.

While Saturday is getting the majority of the blame for this blunder, it can certainly be argued that Matt Ryan also deserves a large amount of blame given his experience as a quarterback.

Saturday discussed the situation following the game, saying that the team simply didn’t make enough plays to win the game.

Jeff Saturday on the Colts’ clock management and not using the timeouts. 🏈 #MNF pic.twitter.com/sgk9nblwG7

“I thought we had plenty of time,” said Saturday. “This wasn’t a press for time. We simply didn’t make enough plays.”

While he is technically right and they didn’t run out of time, the whole end of the drive felt incredibly rushed. They certainly could have benefitted from a timeout earlier to put together a good play call.

The end of this game clearly won’t quiet any of Saturday’s critics moving forward.