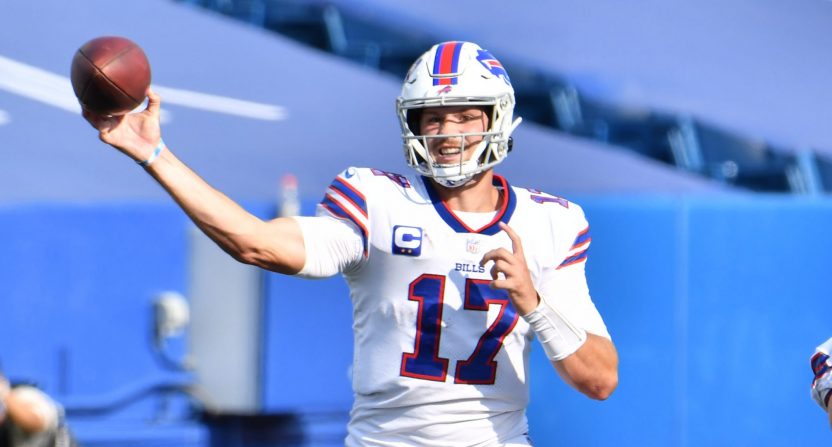 The first month of the 2020 NFL season is already complete, and some of the numbers stemming from September are quite freakin’ jarring. Here’s a rundown as we enter October.

Everything about Russell Wilson is off the charts: The clear-cut MVP frontrunner is off to one of the greatest stars in NFL history.

Justin Herbert, third-down superstar?: The rookie Los Angeles Chargers quarterback is 16-for-20 with an NFL-best 140.2 passer rating on third down, which is a strong early indication that he has the right stuff.

Joe Burrow has been sacked far too often: Fourteen times, to be precise, putting him on pace to fall just one sack short of David Carr’s single-season record of 76.

DeAndre Hopkins is on pace to catch an NFL-record 171 passes: Safe to say that trade is working out well for the Arizona Cardinals.

Aldon Smith leads the NFL with four sacks: Not amazing on the surface, until you consider that he hadn’t played in the NFL since 2015.

Comeback Central: There have already been 10 double-digit-point comeback victories this season, which means 21 percent of this year’s winners have overcome deficits of 10 points or more. The Detroit Lions and Atlanta Falcons have been victimized twice that way, while the Chicago Bears have won two of their three games in that fashion. There were 33 such comebacks all of last season, but this campaign is on pace to produce 53.

This is on pace to be the highest-scoring season in NFL history: And it’s not even close. NFL games have contained an average of 51.0 points, which beats out the 2013 campaign (46.8). Plays have generated an average of 5.7 yards, which would also be a record. And games are averaging a record-low 2.6 turnovers.

The Green Bay Packers are averaging 6.9 yards per play: That’d be the second-highest full-season average in NFL history, behind only the 2000 St. Louis Rams (7.0). They’re also averaging more than 40 points per game.

The Indianapolis Colts defense has been en fuego: They’ve surrendered a league-low 4.4 yards per play and 44 first downs (nobody else has given up fewer than 55). They also rank one back of the NFL lead with six takeaways, and No. 1 in terms of points and yards allowed.

The Pittsburgh Steelers defense is on pace to record 80 sacks: Eighty! No team has ever registered more than 72 (1984 Bears).