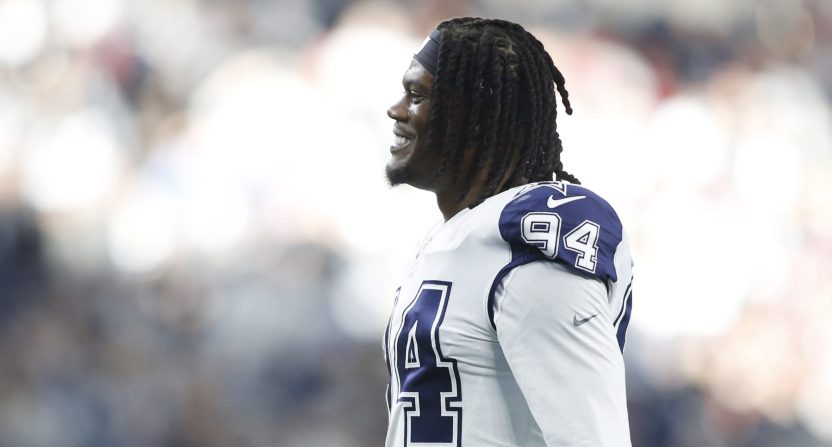 The Dallas Cowboys came up short this past season, losing in the Wild Card round of the playoffs to the San Francisco 49ers after an impressive 12-5 record.

A big reason for the team’s regular-season success came from the impressive play of the defense. Defensive end Randy Gregory finally emerged as a capable pass rusher for the team in his fifth season, recording six sacks in only 11 starts.

Re-signing Gregory was a big focal point of the offseason for the Cowboys and it initially appeared that they had done that. Reports came out on Tuesday that Gregory had agreed to a deal with the team. However, Gregory went back on his agreement with the Cowboys and has decided to sign with the Denver Broncos.

The contract offered to Gregory was the same from both teams, but he will now be heading to Denver on a five-year $70 million contract.

The Cowboys reportedly insisted on “contract language” that Gregory did not like, so he made his decision to head to Denver instead.

And so it’s the #Broncos — not the #Cowboys — that are in agreement with Randy Gregory. My understanding is Dallas insisted on contract language that Gregory did not like protecting themselves. So he heads to Denver.

The Broncos social media team posted this message, all but confirming the signing of Gregory and taking a shot at the Cowboys over their false alarm.

This post has got the NFL world talking, with many taking their opportunity to roast the Cowboys for how this situation went down.

I ABSOLUTELY HATE IT HERE https://t.co/DNit9GkC51

The @Broncos social media game is on point.
They’ve killed in the last weeks. https://t.co/SftlenFFvD

This is far from the first time that a team or coach has bailed on an organization after initially agreeing to sign with said team.

Minnesota Vikings linebacker Anthony Barr did a similar thing in 2019, initially agreeing to terms with the New York Jets only to decide moments later that he wanted to return to Minnesota.

We have seen this on a coaching level as well. Current Las Vegas Raiders head coach Josh McDaniels received a ton of controversy in 2018 when he initially agreed to sign as the new head coach of the Indianapolis Colts, only to return to New England to remain their offensive coordinator.

Regardless of how it played out, this is a huge blow for the Cowboys, and one that certainly cannot feel good considering all that they have put up with from Gregory in the past. The team notibly dealt with Gregory’s substance abuse issues multiple times throughout his career, and were still willing to offer him this major contract. It certainly seems like a slap in the face for him to back out on them like this.