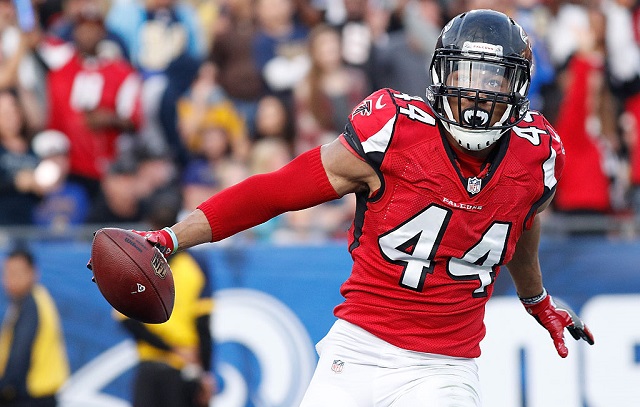 When the dust settles in Houston following the conclusion of Sunday’s Super Bowl LI, either the New England Patriots or the Atlanta Falcons will be the NFL champions. But in addition to the winning team being presented with the Vincent Lombardi Trophy, there is also another award up for grabs: The game’s Most Valuable Player, who receives the Pete Rozelle Trophy.

The award typically goes to a player on the winning team — only once, in 1971, did it not — and most usually to quarterbacks. Of the 51 awards presented, 27 have gone to the quarterback while defensive players have combined for 10 since its inception in 1967.

But that history does not necessarily mean that Matt Ryan will be the Rozelle winner if the Falcons win or that a Patriots victory would give Tom Brady individual honors. Unlike the season-long MVP award, the Super Bowl MVP goes to the player who has the most impact within the confines of the game’s four quarters. This means, at least in theory, anyone on the field on Sunday has a chance of earning MVP honors.

Here are dark-horse candidates from each team that could change the game enough to win Super Bowl LI MVP.

Patriots cornerback Malcolm Butler made the game-saving play just two years ago at Super Bowl XLIX, intercepting Seattle Seahawks quarterback Russell Wilson in the Patriots’ end zone in the game’s final seconds. But even that wasn’t enough for him to be named the game’s MVP. Brady instead got the nod, the third MVP award in his career.

But Butler will have another chance at it on Sunday. In the two years since, Butler has gone from relatively unknown defensive back to an indispensable part of New England’s secondary. He had four regular-season interceptions and 16 passes defensed and, most notably, held Pittsburgh Steelers receiver Antonio Brown to two catches on four targets for 24 yards when tasked with covering him. (Brown ended the day with seven catches for 77 yards and no scores.)

The Falcons can be a pass-heavy team, which could make things interesting for Butler. Atlanta relies on deep passing more than any other offense in the league, explaining their third rank in passing yards though a 26th rank in pass attempts. Butler will most likely be tasked with helping shut down the Falcons’ top wideout, Julio Jones. And if Ryan wants to force the football Jones’ way, Butler could come down with a crucial interception — one crucial enough to win the game for the Patriots and earn him MVP honors. How rare is this? Only one cornerback has been named Super Bowl MVP: the Dallas Cowboys’ Larry Brown in 1996.

Check out Vic Beasley's Top 10 Plays of the Season! https://t.co/3hy4VE9oQp

A linebacker winning the Super Bowl MVP award is not as rare as cornerback, but it’s close: It’s happened just four times, but the precedent is more recent, with the Seahawks’ Malcolm Smith winning it in 2014 and former Baltimore Raven Ray Lewis winning it in 2001. Still, it will be a hard feat to accomplish for Falcons second-year linebacker Vic Beasley, though not out of the realm of possibility.

Beasley is the regular-season NFL sack leader for 2016 with 15.5, and he also has 39 combined tackles. Though mostly neutralized during the Falcons’ two previous playoff games, with no sacks and two assists, it cannot be understated just how much Beasley’s contributions have helped his team get as far as they have.

Brady is hard to rattle, having been sacked only 15 times through 12 regular-season games. But he was brought down four times in two contests during this postseason and there’s no doubt that Falcons head coach Dan Quinn and defensive coordinator Richard Smith want to bring the heat on Brady. That effort begins and ends with Beasley and if he can knock Brady to the turf often enough in an eventual Falcons win, he could be No. 1 on the MVP list.

It could have been a dominant 2016 for Patriots tight end Martellus Bennett. He was traded by the Chicago Bears to New England last March, thus being given the opportunity to work with a quarterback of Brady’s quality. Fellow tight end Rob Gronkowski opened the year hobbled by a hamstring injury and landed on injured reserve in early December. The opening was there for Bennett to revitalize his career.

Granted, Bennett’s 2016 wasn’t terrible. He caught 55 passes on 73 targets for 701 yards and seven scores. But he hasn’t gone over 100 yards since Week 10 and three of his seven touchdowns came in one game, back in Week 5. Bennett’s under-the-radar status, though, could certainly provide a wrinkle in New England’s offensive plans. Another three-touchdown performance in a win would easily make him the game’s MVP.

Another plus for Bennett in this scenario: The potential of a substantial payday. Bennett had only one year left on the four-year, $20.4 million deal he inked with the Bears in 2013. Heading into a contract year, a Rozelle Trophy could be a strong bargaining chip for the soon-to-be 30-year old.

#7 @TGdadon1 (Taylor Gabriel) Sprints & Weaves Through the Cardinals Defense for a Touchdown (Week 12 vs ARI) pic.twitter.com/PGo58svjCz

With Julio Jones doubtlessly seeing double- or triple-coverage at times on Sunday in an effort to minimize the damage the wideout can do when in sync with Ryan, other receiving options will have to emerge. One is certainly Taylor Gabriel, the former Cleveland Brown who was reunited with his rookie-year offensive coordinator, Kyle Shanahan, via free agency last spring.

Gabriel isn’t an off-the-radar receiver, by any stretch. Though he had only 579 regular-season yards, his six regular-season touchdowns tied Jones’ number and his 16.5 yards-per-reception average fits well with the Falcons’ offensive philosophy in the passing game.

The receiver’s performances in the postseason thus far illustrate just how useful he can be to Ryan on Sunday. Of his nine targets (in two games) he has caught six for 95 yards. But most notably, he is an asset all over the field. His average yards-per-target in the Divisional Round against the Seattle Seahawks was 11.8 and against the Packers, it was 8.0.

Gabriel’s ability to catch passes all over the field and create big gains after the catch might just be what the Falcons need to spread the Patriots’ coverage thin. Overlooking him is a fool’s errand that could lead to Atlanta winning the Super Bowl behind Gabriel’s Most Valuable performance.

Make that 3 TDs from Tom Brady. This one went to Danny Amendola. #patriots pic.twitter.com/fyoFkrji5l

Danny Amendola has spent his entire NFL career as a utility man. He’s never been the type to set receiving yardage records or score the most touchdowns in the league, but his last four years with the Patriots have been productive ones. It’s just rarely happened as a receiver.

In 2016, Amendola totaled only 23 catches for 243 yards and four scores, though he did catch 79.3 percent of his targets. He had only 12 additional receiving yards in two playoff games. But he is a key member of the Patriots’ special teams, serving both as a kick and punt returner. That’s where he could be a dark-horse candidate to win Super Bowl MVP.

Including playoffs, Amendola has returned 22 punts for 175 yards and five kickoffs for 129 more yards. Though he has no return scores this year and has split both punt and kick return duties with the likes of Julian Edelman and Cyrus Jones, stashing Amendola under the radar could make him an unpredictable threat against the Falcons. Atlanta has yet to allow a kick or punt return for a touchdown this year, but should Amendola change that, a game-altering return score could earn him MVP honors.

Devonta Freeman is a special man. 75 yard touchdown! Over 1000 yards for the season. #NOvsATL #RiseUp pic.twitter.com/JRVCHZ6K37

Falcons running back Devonta Freeman is a Pro Bowler, with over 1,500 yards from scrimmage (and another 209 in the playoffs) and 15 combined touchdowns through 18 games. But that still doesn’t mean he’s a top name to come to mind as far as Super Bowl LI MVP is concerned.

For one, no back has won the honor since Terrell Davis in 1998. For another, earning rushing yardage is not a common practice against the Patriots’ defense this year, with the team ranking third in rushing yards allowed, tops in rushing touchdowns allowed and eighth in yards per attempt allowed.

But Freeman could be a deciding factor in Sunday’s outcome, particularly if that outcome is a Falcons win. Offenses haven’t done much running against the Patriots defense this year, because playing catchup via air yards has been the prevailing philosophy. (Case in point: New England has outscored opponents 441 to 250 in 2016.) But the Falcons don’t just have any offense: They have the top-scoring unit in the league. And there’s no doubt they will try to protect any lead they establish on Sunday.

That’s where Freeman comes in. He can help the Falcons control the time of possession while also serving as another reliable set of hands to help spread the pass defense thin, including linebackers working in coverage. Plus, unlike Gabriel, Freeman’s production isn’t solely dependent on Ryan. Should Gabriel have a strong showing, it may be Ryan who gets the MVP nod (rather than voters breaking from prevailing tradition). Freeman is, in that sense, his own entity. As one of the league’s best backs, he could see a heavy workload on Sunday.