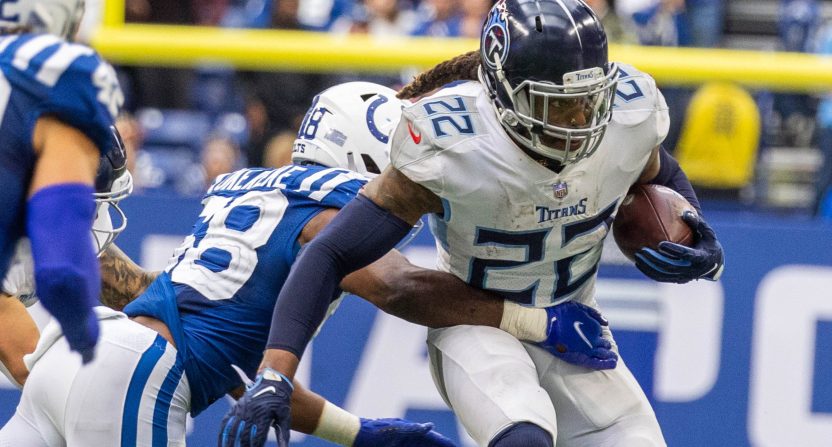 The rest of the NFL is officially on notice now that Derrick Henry is back with the Tennessee Titans.

Henry, who has been out since late October due to a broken bone in his right foot, was activated off of injured reserve on Wednesday by the Titans, who hope to have the megastar running back ready for the playoffs.

The #Titans have officially designated RB Derrick Henry to return from injured reserve.

The 28-year-old had 937 yards and 11 total touchdowns in eight games before the injury, which was expected to keep him out of action for 6-10 weeks. It’s been 9 weeks now and, since the Titans will likely have a bye in the first round of the NFL playoffs, that means he would be in line to return 11 weeks following the injury. Not to mention he’ll have had three weeks of practice by then to recuperate.

It is 9 weeks from surgery for an injury that had an estimated recovery time of 6-10 weeks. If Tennessee has the bye, it’ll be 11 weeks. More than enough time for one of the NFL’s best backs to return at full strength. https://t.co/nnvnu0USzs

The Titans were able to maintain their status as one of the top teams in the AFC while Henry was out, but his return means that arguably the most dominant running back in the league will add another dimension to Tennessee’s offensive attack, making them that much harder to overcome, especially with home-field advantage.

Henry led the NFL in rushing yards and rushing touchdowns in 2019, doing so again in 2020 by becoming just the eighth player in NFL history to rush for over 2,000 yards in a season. He was named the 2020 Associated Press NFL Offensive Player of the Year and was named to the Pro Bowl.

Even if Henry is only at 75% by the time he steps back on the field, that’s better than most running backs in the NFL. And given the reactions that his return to practice has caused around NFL circles on social media, no one will want to be the opponent to have to line up across from him and find out.

While it's nothing short of great news for the Titans to get back Henry, the rest of the roster is also healthier.
This is a much different looking team than what we saw in their 6 game win streak in late October against the Rams,Bills. Chiefs, Colts, and Saints https://t.co/E1UYxhn3ot

The king has returned… and the NFL playoffs should be much better for it. https://t.co/n043na3Mnb

There's just one week left in the regular season and Derrick Henry – who has been out since Halloween – is still 6th in the NFL in rushing yards.

Mike Vrabel walking into the playoffs with a healthy Derrick Henry pic.twitter.com/6Y6hKarCZk