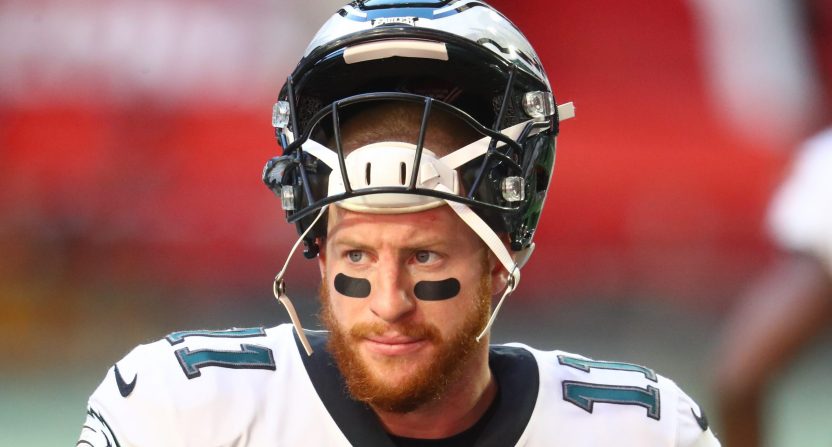 Our long national saga is over, as the Eagles finally dealt Carson Wentz. His landing spot: Indianapolis, where he’ll be reunited with Colts coach Frank Reich.

The price: two draft picks, a third this year and a conditional pick next year.

Philadelphia has agreed to trade Carson Wentz to the Indianapolis Colts in exchange for a 2021 third-round pick and a conditional 2022 second-round pick that could turn into a first, league sources tell @mortreport and me.

At first glance that’s a lesser return than the Eagles had probably hoped for, though their asking price was never likely to be met. (When you even scare off Ryan Pace, you know you’ve opened the bidding too high.)

That 2022 conditional pick, though, could convert to a first, which would make Philadelphia’s return look a bit better (and make the Colts look a bit more desperate):

* 2022 2nd-rounder becomes a first-rounder if Wentz plays 75% of Indy's offensive snaps, or 70% and the Colts make the playoffs.

If you’re wondering how likely that is to convey, well, it’s not exactly a high bar to clear:

This strikes me as a very attainable condition for the first-rounder. Wentz got benched this season and still hit 72 percent of the snaps. He played 99 percent last season. https://t.co/Tl32rPrhKz

The Colts, though, certainly had a need at quarterback in the wake of Philip Rivers’ retirement. Considering they’re trying to win and contend now, giving up that conditional (and likely) first for Wentz makes some sense, although it is pretty wild that the Eagles managed to extract that value given how bad Wentz was last season.

Now he’ll try to revive his career under Frank Reich, who landed the Colts head coaching job on the strength of his work with Wentz in Philadelphia. This is what we said about the Colts and their fit back in December, when it was obvious Wentz would be traded this offseason:

This would of course mean a reunion between Wentz and Frank Reich, who won a Super Bowl together when Wentz was an MVP candidate and Reich was a lauded offensive coordinator in 2017. Reich recently expressed confidence in current starter Philip Rivers, but the 39-year-old isn’t under contract beyond this season, and another playoff failure could cause the organization to go in a new direction.

Indy is smart with its money and certainly would have the cap space to absorb what would be left of Wentz’s contract, much of which would be swallowed by the Eagles.

It’s possible conservative Colts general manager Chris Ballard would be turned off by a bidding war for the services of a quarterback coming off an abysmal season, but the Colts might not have a lot to lose, and they did show they’re willing to part with significant draft capital in this year’s trade for DeForest Buckner.

This trade also shows how fickle first round quarterbacks can be:

And with the trade of Carson Wentz, there will now not be a single QB drafted in the first round from 2009-2016 that is still with his original team.

There are certainly some quarterbacks drafted outside the first round in that window that remain with their original franchise, but it goes to show how hard it is to figure the position out. (Or, conversely, how bad teams are at identifying quarterback talent, for a variety of reasons.)

The trade gets the Colts a presumed starter with some reclamation upside, while it netted the Eagles a couple of draft picks, including possibly a first. That’s probably less than what each fanbase would have wanted, but sometimes that’s the sign of a fair trade.