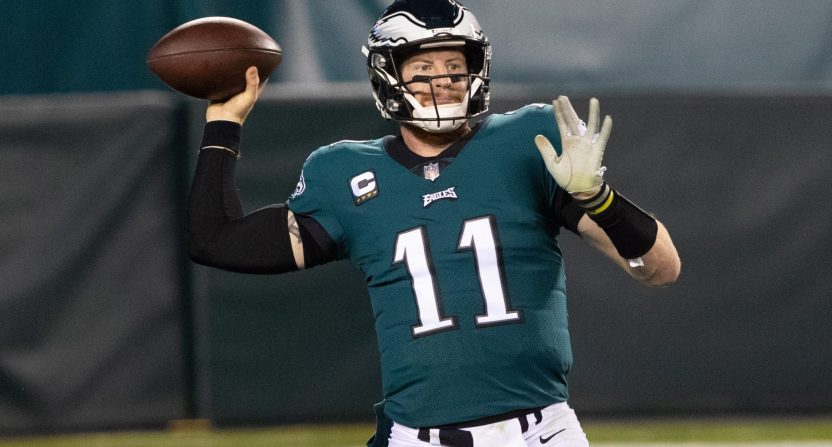 If Jalen Hurts continues to give the Philadelphia Eagles offense more energy and production than Carson Wentz did, it will be almost impossible for the team to get the toothpaste back in the tube. Hurts will likely enter 2021 as the presumed starting quarterback for the Eagles, which means Philadelphia would have to at least consider biting a massive financial bullet by trading their $32-million-a-year signal-caller.

Which potential trade partners make the most sense? Let’s break it down.

This would of course mean a reunion between Wentz and Frank Reich, who won a Super Bowl together when Wentz was an MVP candidate and Reich was a lauded offensive coordinator in 2017. Reich recently expressed confidence in current starter Philip Rivers, but the 39-year-old isn’t under contract beyond this season, and another playoff failure could cause the organization to go in a new direction.

Indy is smart with its money and certainly would have the cap space to absorb what would be left of Wentz’s contract, much of which would be swallowed by the Eagles.

It’s possible conservative Colts general manager Chris Ballard would be turned off by a bidding war for the services of a quarterback coming off an abysmal season, but the Colts might not have a lot to lose, and they did show they’re willing to part with significant draft capital in this year’s trade for DeForest Buckner.

The Patriots looked headed for a rebuild in 2020 before suddenly taking a shot at Cam Newton. Many figured Bill Belichick and the New England football environment could enable Newton to turn his career around. That didn’t happen, but it’s entirely possible the Pats will swing the bat at another, younger reclamation project with Wentz.

Now, Belichick has already griped about salary-cap constraints factoring in during a down year, and a run at Wentz would be costly. But it might also true that the second-oldest head coach in the NFL is growing impatient and unwilling to sit through a painful rebuild.

If so, this would be within the realm of possibility.

Speaking of impatient, that’s become the go-to way to describe Broncos general manager John Elway, who hasn’t been able to find a franchise quarterback since Peyton Manning retired, and might not have the answer in Drew Lock. If the second-year second-round pick can’t finish this season strong, the pressure will be high for Elway to find a solution ASAP in order to save his job.

The problem is that the Broncos aren’t loaded with draft capital or salary-cap space, which means trading for Wentz would be particularly costly to them. It would make it hard to keep several key veterans, and even harder to invest in the rest of the roster, which would backfire if Wentz weren’t to immediately become the 2017 version of himself in Colorado.

The Jags are likely going to have a shot at one of the top quarterbacks in the 2021 draft class. But if it’s Trevor Lawrence or bust for Jacksonville, and the Lawrence goes to the Jets or stays in school, Jacksonville — which has two first-round picks and two second-round picks — could make a run at Wentz.

Not only are they loaded with draft capital as a result of trades that sent Jalen Ramsey and Yannick Ngakoue out of town, but the Jaguars lead the NFL in projected 2021 salary-cap space as well.

Shad Khan, who recently fired GM Dave Caldwell, might be looking for a splash. This would provide exactly that.

This is of course unlikely because the Eagles and Washington share a division, but Philadelphia traded quarterback Donovan McNabb to Washington a decade ago, so you never know. And considering that it appears the WFT has already given up on Dwayne Haskins Jr., this would also make a lot of sense.

For what it’s worth, Washington has an extra Day 2 draft pick thanks to the Trent Williams trade with San Francisco and is projected to possess more cap space than any other team in the NFC.