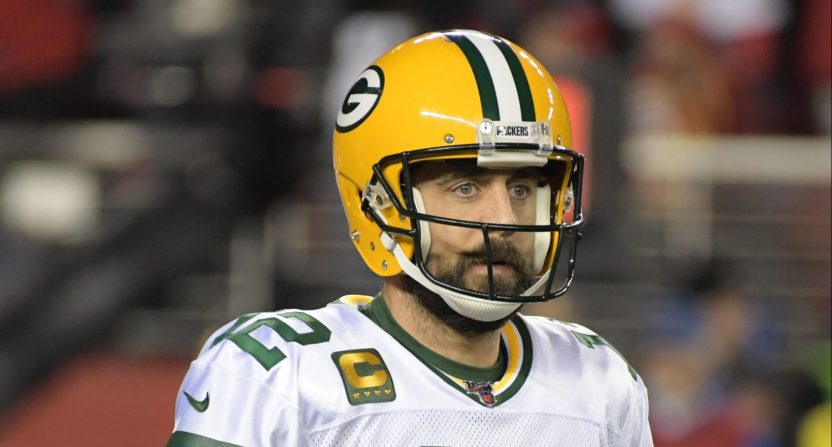 Have you heard that the Green Bay Packers traded up for a quarterback in the first round of the NFL Draft? That, naturally, has led to suspicions that the team and Rodgers could be headed toward divorce in the coming years. If so, watch for these teams to be in on the pursuit.

New England Patriots: The post-Tom Brady Pats are going all-in on second-year middle-round pick Jarrett Stidham, but if Stidham doesn’t pan out and New England doesn’t complete tank for Trevor Lawrence, you’d expect them to make a run at the highest-rated passer in NFL history. For at least a couple of years, this would make a lot of sense.

Las Vegas Raiders: It continues to look as though Raiders head coach Jon Gruden isn’t in love with current quarterback Derek Carr, who might even be pushed by new backup Marcus Mariota this year. There’s a good chance neither is the answer, in which case Las Vegas could become desperate and make an offer that Rodgers and the Packers can’t refuse.

Pittsburgh Steelers: Ben Roethlisberger appears to be on either the 17th or 18th hole. Rodgers would likely be psyched to join a competitive, respected organization with a tremendous defense, and he could help Pittsburgh avoid a complete rebuild if Big Ben steps away in a year or two.

Indianapolis Colts: Rodgers and Frank Reich would seem like a nice match. If the Philip Rivers experiment lasts just a year, I’d expect the Colts to be all over him. He’d also likely be fired up about the talent in Indianapolis (especially along the offensive line).

New Orleans Saints: Just in case the Saints decide Jameis Winston and Taysom Hill aren’t ideal successors to Drew Brees, who may very well be entering his last season in the NFL. Sean Payton and Rodgers would seem like a great match, and both team and player would benefit from this.

San Francisco 49ers: I’m not totally convinced that the 49ers are convinced Jimmy Garoppolo is the guy. If he doesn’t take a big step forward in 2020 and Rodgers becomes available, John Lynch and Kyle Shanahan would almost certainly make a phone call regarding the California boy.

Jacksonvillle Jaguars: Think there’s no way Rodgers would agree to become a Jaguar? The same could’ve been said of Brady and the Tampa Bay Buccaneers a few months ago. If the Jags can keep building and generate the capital to outspend everyone else, they could convince Rodgers to be part of something in 2021 or 2022.

Tampa Bay Buccaneers: Or the Bucs could jump from one old Hall of Fame quarterback to another. If Brady decides to move on in a year or two, Rodgers could step into those shoes for a team that looks as though it will keep pushing.