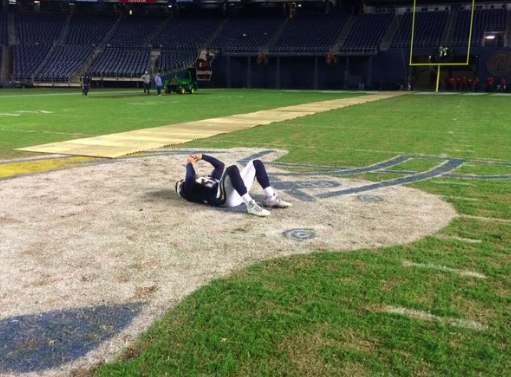 The San Diego Chargers, one of three teams in the league that have been under speculation in regards to a move to Los Angeles, might have played their final game in Qualcomm Stadium Sunday afternoon.

So after the Chargers had a convincing 30-14 win over the Miami Dolphins Sunday, Weddle was sure to take in every last moment, considering it could be his last in the city in which he’s played his entire professional career.

Even if the Chargers do stay in San Diego, Weddle is in the last year of a five year contract so his NFL future may be elsewhere. While you might think that Weddle laying in an empty Qualcomm Stadium would be the end of it, he spent time with fans, signing autographs and taking pictures as well.

Of course, with any grand opening comes a grand closing, and Weddle left the stadium in style, in his car that is appropriately named the “Batmobile”.

And Eric Weddle, driver of the 'Batmobile,' is out. pic.twitter.com/3SxSRpLbOb

The NFL owners will get together on January 12 and 13, where they intend on putting at least one NFL franchise in the 2nd largest market in the country.

Panthers owner Jerry Richardson and the Texans’ Bob McNair have been two of the six members of the committee campaigning to bring a team to Los Angeles specifically calling for the Chargers move.

The team will know their fate in the coming weeks, but most people involved with the Chargers appear to want nothing to do with Los Angeles.