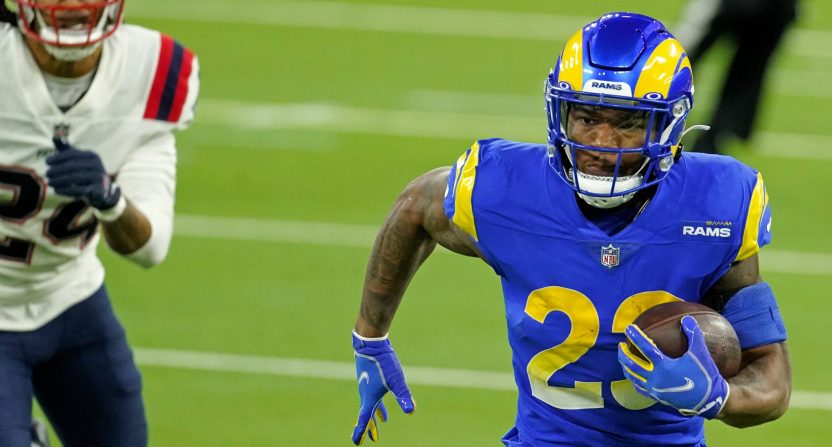 The Los Angeles Rams crushed the New England Patriots 24-3 on Thursday Night Football at SoFi Stadium. Here are our main takeaways from the Rams’ blowout victory:

Cam Akers ran all over the New England defense

While Sean McVay will surely continue to mix in a few running backs (such as Darrell Henderson and Malcolm Brown), Cam Akers is emerging the Rams’ clear No. 1 option. After a career-high 21 carries in Week 13 vs the Arizona Cardinals, the second-round rookie out of Florida State ran for 29 carries and 171 yards (5.9 AVG) on Thursday night. He was even averaging over eight yards per carry until the game was well out of hand and the Rams were in obvious run-out-the-clock mode.

Cam Akers had a breakout game, setting a season-high for a Rams RB playtime (81%) for the 2nd-consecutive week.

Akers gained +37 rush yards over expected, with most of his production coming outside the tackles (21 carries, 150 yards).#NEvsLA | Powered by @awscloud

Akers may win a lot of of fantasy football championships this month, and he can take an already explosive Rams offense to another level the rest of this season.

The New England offense was completely overmatched by Aaron Donald and the Los Angeles defense. The Rams had six sacks, a pick-six (we’ll get to that later), and blew up a 4th-and-goal try by the Patriots.

There goes that man. @AaronDonald97

Terry Bradshaw even used the word “boringest” to describe the New England offense at halftime.

Terry Bradshaw refers to the Patriots offense as "boringest." pic.twitter.com/FbaGfMrHFG

While we can question Bradshaw’s vocabulary, his ultimate point is hard to argue at the moment (okay, it’s still probably the Chicago Bears or New York Jets). The New England offense looked like a total mess, and it ultimately starts with the quarterback play…

Newton completed 9-of-16 passes for 119 yards, an interception, and a 53.9 passer rating. His interception was a pick-six in the red zone to open the second quarter. All of a sudden, a likely one-score game (assuming New England would get at least three points on the drive) became a 17-point game.

With more than 10 minutes remaining and trailing 24-3, Bill Belichick put Stidham in at quarterback. And it’s worth wondering if Stidham will keep the job.

The Patriots have nothing happening in the passing game with Newton, who now has five passing touchdowns and 10 interceptions on the season. Even before the NFL became a quarterback’s league, those numbers would look putrid. The 119 yards he threw for on Thursday night are actually the most yards he’s thrown for over the last three games, and the second-most he’s thrown for over the last five games.

It was understandable for the Patriots to stick it out with Newton as long as they could, with the hope he may reach another level as a passer with more playing time and comfort in their offense. But it’s clearly not happening, and the Patriots might as well see what they have in Stidham — who was originally expected to be their 2020 starter — over their final three games.

There’s even more incentive for the Patriots to play the 24-year-old Stidham with their playoff chances pretty much destroyed. New England entered the game with 13% playoff odds according to Five Thirty Eight, but those odds are all the way down to 4% with the loss. In a loaded AFC playoff race that features a 7-5 Baltimore Ravens team two spots out of the seven-team field, it’s hard to see how 9-7 would get in.

And that’s putting aside that it’s unlikely the Patriots run the table in a schedule that still includes the Miami Dolphins and Buffalo Bills.

The Rams are a very dangerous, well-coached, complete team

The Rams are still flying a bit under the radar when it comes to title contenders, but this team is absolutely capable of going all the way. In the NFC, the only team that can be argued as being as complete right now would be the New Orleans Saints (who are still without Drew Brees). The Green Bay Packers are of course a huge threat because of a terrifying Aaron Rodgers-led offense, but they have a very vulnerable defense. We’ve already seen the Rams beat the Seattle Seahawks (a second meeting is coming up in Week 16) and Tampa Bay Buccaneers (in Tampa on Monday Night Football) this season.

As long as Goff limits the turnovers and brutal mistakes (which, yes- he’s prone to), the Rams will be an extremely difficult out in January. Los Angeles may just be getting better — and more balanced — on offense with Akers emerging, and it’s already a beautifully-schemed offense from McVay that gives defensive coordinators nightmares.

The Rams are a very good team on both sides of the ball, capable of winning in many different ways. And that’s a trait that tends to translate well to playoff football.