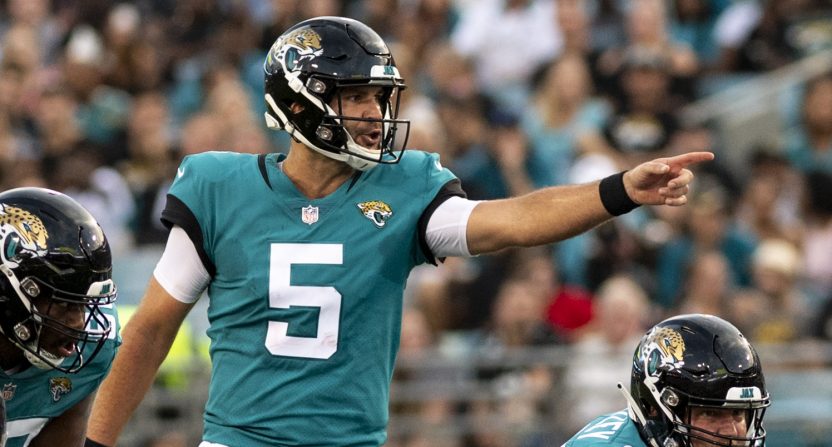 It wasn’t long ago that the AFC South was one of the worst divisions in football. The early Andrew Luck Colts, before Luck’s shoulder fell off, made the AFC Championship. But back in 2014, the Jaguars were the Jaguars, the Titans were bottoming out for Marcus Mariota and the Texans were in the last days of the Matt Schaub era. It was bleak.

In a couple of years, despite injuries to the division’s premier players, the AFC South’s fortunes have collectively flipped. Luck and JJ Watt have (hopefully) fully recovered from costly injuries. And after a promising 2017, everyone in the division can be optimistic for 2018. The NFC South will be reluctant to relinquish the title of best division in football, and the NFC West will again be in the discussion, but the AFC South has the potential to throw itself into the mix.

Luck’s health, and whether the Colts as a whole can take a step forward, will be the most intriguing variable. They will win at least a few more games by virtue of Luck, who should be entering his prime at 28, but their 4-12 record last year can’t be pinned entirely on Luck’s replacement Jacoby Brissett. The defense was 27th in DVOA and was particularly bad in the secondary.

To improve in coverage, they’ll rely on safety Malik Hooker’s health, and on new defensive coordinator Matt Eberflus, who arrives on new coach Frank Reich’s staff. Eberflus is shifting to a 4-3 this year, pushing Jabaal Sheard and John Simon to more defined roles on the defensive line.

Indianapolis have a young defense and a new coaching staff, which fits right in the current AFC South M.O. Luck’s health will always be the No. 1 question for the Colts, but a new-look offensive line, featuring highly-touted guard Quenton Nelson, provides hope.

The Titans also bring in new blood on the sideline. No longer is Mike Munchak running his famous “exotic smashmouth” system, which was essentially glorified John Fox football; Mike Vrabel is in Nashville now with a young offensive staff featuring 38-year-old QB whisperer Matt LaFleur. The AFC South got better simply with the exits of Munchak and the eternally-stale Chuck Pagano.

Tennessee want be to Patriots 2.0, and Vrabel backed up his Pats background by signing former Foxborough defensive backs Logan Ryan and Malcolm Butler. 68-year-old new coordinator Dean Pees has arrived to be the Wade Phillips to Vrabel’s Sean McVay, hoping to improve on an opportunistic, yet-flawed, defense.

Pro Bowl defensive tackle Jurrell Casey, quietly an elite talent, is a top-end asset, as is the Titans’ offensive line, which is led by arguably the best tackle in the league, Taylor Lewan. Marcus Mariota promises to improve on a less-than-dynamic 3rd season under LaFleur. 10 wins is the ceiling for this team.

Last year, the Titans scraped into the playoffs with a 9-7 record, but the Jaguars and Texans seem likely to shut that window of playoff mediocrity. Houston, especially, will improve on a 4-12 record brought upon by horrid quarterback play after Deshaun Watson’s injury. The Texans were hit harder by injuries than any team in the league last season.

Coach Bill O’Brien will have new pieces to play with on defense. If Watt, Jadeveon Clowney and Whitney Mercilus all can stay healthy — which has yet to happen with all of them on the roster — Houston will have the best pass rush in the league. Cornerback Aaron Colvin and safety Tyrann Mathieu are splash free agents that should help a secondary that struggled at times in 2017.

Watson’s receiving corps are likely the best in the AFC South. DeAndre Hopkins is an All-Pro talent, Will Fuller should take another step forward after developing good chemistry with Watson last year, and running back Lamar Miller is a more than capable pass-catcher out of the backfield.

This Texans team, with three Pro Bowl pass-rushers and Watson back, are the popular breakout pick around the league. O’Brien should open Watson’s options further in the playbook after getting a bit too conservative at times last year, particularly after a full offseason with Hopkins and Fuller. They could realistically win 12 games if they stay healthy.

Jacksonville didn’t get worse after going to the AFC Championship in 2017. They’ve shown they don’t have to have an elite quarterback to beat good teams, and while the defense was unusually healthy last year, the Jags are the favorites to take the division. Even after their breakout season, ESPN’s Bill Barnwell picked them as a team most likely to improve. (Alongside Houston and Indy.)

All four teams are eyeing the playoffs this year. The AFC is decidedly inferior to the NFC, and while the intra-division competition should be tight, the rest of the conference could be bad enough to allow three South teams into the postseason. The Chiefs could take a step back with Patrick Mahomes developing. The Chargers are counting on an aging Philip Rivers. The Steelers won’t face significant competition in the AFC North.

But for the first time in recent memory, there’s real hope across the division. The AFC could face a change in hierarchy sooner rather than later.