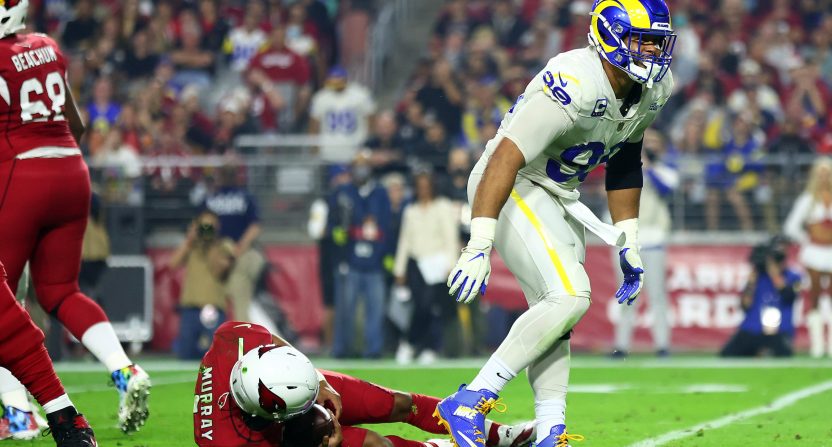 The Los Angeles Rams took down the Arizona Cardinals 30-23 on Monday Night Football in Glendale, AZ. Here are our main takeaways from this divisional battle between two of the NFC’s best teams:

After the game was tied 13-13 at halftime, the Rams dominated the third quarter to take a 27-13 lead into the fourth. It looked like the Rams would win without much drama entering the final minutes, but the Cardinals made it a seven-point game on a Matt Prater 49-yard field goal with 41 seconds remaining. And then the Cardinals recovered the onside kick!

However, the ensuing plays didn’t go well for Arizona. The Cardinals — with no timeouts remaining — were tackled inbounds as the clock was running out, and Kyler Murray was sacked by Aaron Donald — his third sack of the game — on a chaotic play. Arizona probably should’ve spiked the ball here to get on the same page for a play.

Aaron Donald closes it out with his third sack of the game! Rams win 30-23 on MNF. 🏈 pic.twitter.com/ZDQleGRM90

Stafford completed 23-of-30 passes for 287 yards, three touchdowns, no interceptions, and a 139.2 passer rating. And the numbers were definitely matched by the eye test.

Here are a few examples of the dimes Stafford tossed in the Rams’ win:

Matthew Stafford and Van Jefferson connect for the Rams 💣! pic.twitter.com/iaRsKlRfiK

What a throw by Matthew Stafford to Cooper Kupp! 27-13 Rams. pic.twitter.com/lr6LiFbuJ8

Matthew Stafford with another incredible dime to Cooper Kupp. 🔥 pic.twitter.com/swhZqXP1HZ

Kupp finished with 13 receptions for 123 yards and a touchdown. He leads the NFL in receptions, receiving yards, and touchdown receptions. He’s been an absolute machine for the Rams.

Cooper Kupp has been unstoppable this season:

Cooper Kupp has 113 catches and there’s a month left in the regular season. Cardinals had no answer all night. Incredible emergence from fringe top-10 receiver to among the very best.

And so far, the Rams are getting the OBJ that the Cleveland Browns did not. Beckham had six receptions for 77 yards and a touchdown.

OBJ with the TD to give the Rams the lead on MNF. 🏈 pic.twitter.com/SNzEsxz6cy

Additionally, the Rams (9-4) are now just one game back of the Cardinals in the NFC West.

So, this game result really opened up *a lot* of scenarios in the NFC.

And the rest of the NFC definitely doesn’t want the Packers and Buccaneers having the top-two seeds; each team is undefeated at home. Aaron Rodgers and the Packers are always a nightmare matchup at Lambeau Field in January, and Tom Brady and the Buccaneers are of course the defending champions. The path to the Super Bowl gets much more challenging on paper for the rest of the NFC if they have to go through Green Bay or Tampa Bay to get there.

Five Thirty Eight currently gives the Packers the highest chance at the No. 1 seed, at 45%. The Buccaneers come in second at 39%, while the Cardinals’ first-round bye odds fall to 10% after the loss. As for the NFC West, the Cardinals are still the heavy favorites to win the division at 89%, with the Rams being estimated to have an 11% chance at the division crown.

The Cardinals get a cupcake opportunity to get back into the win column in Week 15 against the one-win Lions in Detroit, while the Rams host the Seattle Seahawks.