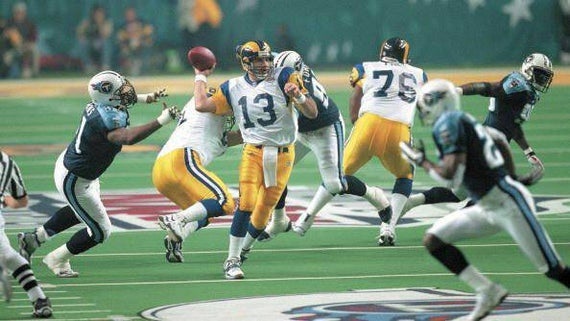 When it comes to surprises in sports, you might not find a bigger one than the 1999 St. Louis Rams. “The Greatest Show on Turf” came out of nowhere to stun, delight, and entertain. The Rams’ storybook season sounds like fiction: a former grocery store shelf stocker leads a former laughing-stock franchise to a Super Bowl title on Jan. 30, 2000. Some day there will be an ESPN 30 for 30 about it. I’m surprised Disney hasn’t already made a movie.

How unlikely a champion were the Rams? According to the preseason odds, they were +15000 to win the Super Bowl. Their win-loss over/under was 5.5 – only three teams were lower. No previous team had ever won the Super Bowl after losing 12 games.

The high-scoring Rams did more than just regale us with explosive plays. They ushered in a new way of football thinking. In many ways, the product we enjoy today was influenced by St. Louis’ fastbreak mentality. Forget the cookie-cutter approach of establishing the run, worrying about time of possession, or calling plays strictly based on down and distance. The Rams’ approach was to score early, often, and force opponents to catch up.

What makes this more amazing is that it almost didn’t happen.

Since moving from Los Angeles, the Rams were a joke. From their inaugural 1995 season in St. Louis to 1998, the team was 22-42 with their record getting progressively worse.

A lot of people laughed when Dick Vermeil was brought out of retirement and the TV booth to coach the team in 1997. Yes, Vermeil guided the Eagles to a Super Bowl in 1980, but he hadn’t coached since 1982, citing burnout. In Vermeil’s first two seasons in St. Louis, the team went 5-11 and 4-12. It was fair to wonder if the game had passed him by and if his third season would be his final one.

If there’s one word to describe the stunning 1999 season, it’s serendipity. You couldn’t plan this. First, St. Louis was the beneficiary of a disgruntled running back’s demands. Marshall Faulk was in the middle of a contract dispute with Indianapolis. On the eve of the NFL Draft, Colts general manager Bill Polian shipped Faulk to St. Louis for a second and fifth-round pick. The Rams had a star in the backfield to pair with newly acquired free-agent quarterback Trent Green, who grew up in the St. Louis area.

The Rams were convinced they were better, but no one else was impressed. And then disaster seemingly struck. Green sustained a season-ending knee injury a preseason game. All hope appeared loss, but the resolute Vermeil said the team would lean on the backup quarterback. A guy few people had ever heard of.

Even the most optimistic St. Louis fan had to be skeptical. Kurt Warner was an undrafted unknown out of FCS Northern Iowa — who had been working at a Hy-Vee grocery store in Cedar Falls, IA — played in the Arena League and NFL Europe. Still, Warner was penciled in as the season-opening starter.

What happened next was completely unexpected.

Warner led the Rams to a 6-0 start, outscoring the opposition 217 to 63. During that stretch, Warner threw for 18 touchdowns with just three interceptions. With Faulk, veteran wide receiver Isaac Bruce, and rookie wideout Torry Holt, this offense looked unstoppable. New offensive coordinator Mike Martz didn’t care about conventional football. He wanted to pass first and run later. Even Faulk got into the action as a pass-catcher, running routes usually seen by tight ends and wide receivers. As a result, Faulk became just the second player in NFL history to amass 1,000 rushing yards (1,381) and 1,000 receiving yards (1,048).

St. Louis (13-3) rolled out to big leads against an NFL that had never seen anything like this before. The Rams scored the second-most points in league history (526) behind Warner’s unlikely ascension to league MVP. He led the league in passer rating (109.2), completion percentage (65.1), touchdown passes (41), yards per pass (8.7), and was second in passing yards (4,353). Warner dominated an NFL that had Peyton Manning, Brett Favre, and Troy Aikman. Sports Illustrated put Warner on its cover with the headline: “Who Is This Guy?”

Could Warner and the Rams continue their excellence in the playoffs?

They outscored Minnesota 49-37, and then survived an upset bid by Tampa Bay 11-6 to advance to the Super Bowl for the first time since the 1979 season. St. Louis vs. Tennessee was a rematch of an earlier meeting won by the Titans 24-21.

Super Bowl XXXIV produced one of the most exciting finishes in league history. Warner’s 73-yard touchdown bomb to Bruce snapped a 16-16 tie to put St. Louis ahead for good with just under two minutes to play.

The magical season had a magical ending and looked like the Rams would dominate for years. But St. Louis never became a dynasty. Vermeil stepped down as coach after the Super Bowl and Martz took over. The offensive continued to thrive, scoring 540 points in 2000 and 504 in 2001. However, it never won another championship.

In 2000, the Rams were hurt by a leaky defense. The following season, they fixed it with the hiring of Lovie Smith as defensive coordinator. St. Louis (14-2) returned to the Super Bowl, and was a 14-point favorite over the New England Patriots and a young quarterback named Tom Brady. In one of the biggest upsets in sports history, the Rams lost 20-17.

That game launched the Brady-Bill Belichick Patriots that we know today. That defeat also effectively ended The Greatest Show on Turf.

Warner suffered through injuries in 2002, and was benched in favor of Marc Bulger in 2003. Martz won just one more playoff game with the Rams and was fired after the 2005 season. Faulk got old and was eventually replaced by Steven Jackson.

Two key participants did enjoy second acts. Warner, after a short stint with the New York Giants, rebounded to lead the Arizona Cardinals to the Super Bowl after the 2008 regular season. Vermeil returned to coach the Kansas City Chiefs (2001-05).

The Rams returned to Los Angeles in 2016.

The St. Louis Rams remain one of the most famous teams of the Super Bowl era. Their unlikely championship represented the hope of all sports fans- that anything can happen.

Maybe your downtrodden team will come out of nowhere to win it all.