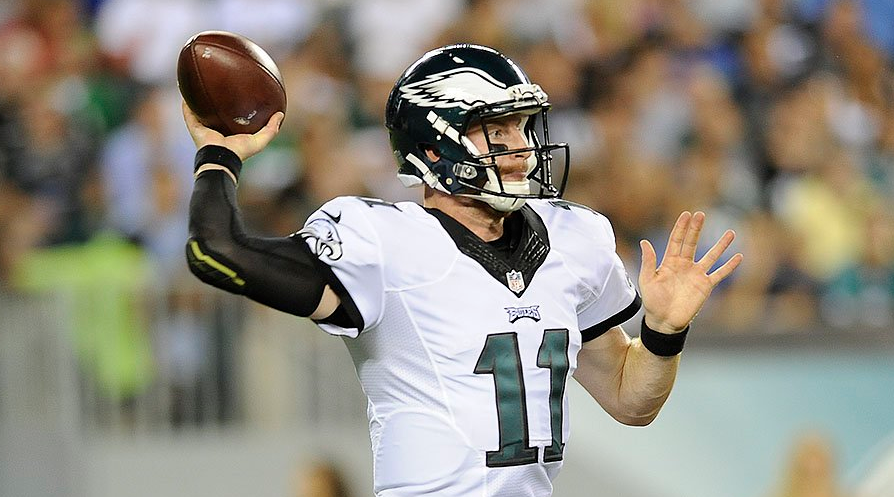 Quarterbacks Jared Goff and Carson Wentz were the Nos. 1 and 2 players taken in the 2016 NFL Draft, the former selected by the Los Angeles Rams and the latter by the Philadelphia Eagles. Both teams traded up for the opportunities to snag their presumed quarterbacks of the future. But these bold moves did not lead to Goff and Wentz setting the league aflame as rookies.

Wentz started from Week 1 and helped lead the Eagles to a 7-9 record, not a poor showing given the Eagles’ simultaneous unraveling of Chip Kelly’s numerous questionable personnel decisions. He completed 62.4 percent of his passes for 7,782 yards, but threw just 16 touchdowns compared to 14 interceptions and was sacked 33 times.

Goff, meanwhile, had his career start slowly, not being elevated to No. 1 on the depth chart until Week 10 after continuing struggles by Case Keenum. Goff’s seven starts were all Rams losses, and his stat line did not seem to reflect his draft pedigree. e compiled a 54.6 percent completion rate, 1,089 passing yards and five touchdowns thrown to seven interceptions, while taking 26 sacks. The Rams ended the year with a 4-12 record.

Regardless of how each quarterback’s rookie year ended, the fact remains that both the Rams and Eagles have invested both time and money (as well as draft picks) in order to bring Goff and Wentz onto their respective rosters. Both teams thus must build around their passers, making their lives easier, increasing their chances for success, and therefore hopefully find themselves on the fast tracks to winning seasons.

The first step in doing so in 2017 was free agency, which kicked off with the start of the new league year on March 9. Both the Rams and Eagles have been active in the past 10 days, adding and subtracting players. While the draft will also give both teams ample opportunities to bolster their roster, the veteran additions (and subtractions) they have already made will directly impact Goff’s and Wentz’s sophomore seasons.

For Wentz and the Eagles, a major focus in free agency was adding more wide receivers. Thanks to a more conservative market than expected, Philadelphia was able to add former Chicago Bears receiver Alshon Jeffery on a one-year, $9.5 million contract. They also brought in deep threat Torrey Smith, previously of the San Francisco 49ers and Baltimore Ravens.

Jeffery’s one-year deal is essentially a prove-it contract, in that he must prove he can stay healthy after appearing in only 21 games over the last two years and scoring only six touchdowns. But when he is on the field for all 16 games, he’s proven to be a top receiving and scoring weapon. In 2013 and 2014, he had 89 and 85 receptions, respectively, with 1,421 yards and seven touchdowns in 2013 and 1,133 yards and 10 scores in 2014.

Smith, meanwhile, is a career boom-or-bust player, with a catch rate of just 49.1 percent over the past six years. But he is capable of averaging well over 15 yards per reception, attracts defensive pass interference penalties as part of his job and, even when his hands aren’t reliable, still requires coverage to pay attention to him as both a big and speedy player.

Having him on the field in concert with (a presumably healthy) Jeffery, alongside Philadelphia’s 2016 receiving leaders Jordan Matthews and Zach Ertz suddenly gives Wentz a plethora of targets and opposing defenses a lot on their plates.

The Rams were less active in terms of adding players during free agency. In fact, most of the roster adjustments that have taken place thus far are subtractions rather than signings. Two of the team’s top receiving targets, Kenny Britt and Lance Kendricks, have left as free agents. The pair combined for 1,501 yards and seven touchdowns in 2017, the latter number accounting for half of all of the Rams’ passing scores.

Their only key skill position signing as of now is wideout (and USC alumnus) Robert Woods, who spent the last four years with the Buffalo Bills and averaged around 600 yards per season.

But the Rams have not completely ignored improving the offense, or making Goff’s 2017 season easier. The offensive line, ranked 29th for 2016 by Football Outsiders, has been upgraded via signing former Cincinnati Bengals left tackle Andrew Whitworth and could also see an addition at guard if the Bills do not match the $5 million offer sheet the Rams extended to Ryan Groy.

Improving the line does not only mean Goff should be better protected this year. It also helps out the run game led by Todd Gurley that struggled in 2016, with a total of just 1,252 yards and nine scores. A more productive run game means less emphasis on Goff having to carry the offense, which in turn makes his youth and inexperience less of a liability.

It should be noted, though, that while the Rams in particular haven’t worked aggressively to improve the cast of characters around their young quarterback, free agency is just a part of the equation. Late April’s NFL Draft will be a key one for both the Rams and Eagles, given how deep the class is at wide receiver, running back and tight end.

The Rams, in particular, should be fairly active in adding players on the offensive side of the ball at receiver and tight end. It should be noted, though, that while both the Rams and Eagles have eight picks in this year’s draft, Los Angeles lacks a first-rounder. But again, the depth of this year’s draft class, particularly at positions which the Rams need to address, will work in their favor.

Ultimately, while it appears that the Eagles have taken the most aggressive steps to help Wentz improve in his second season, the Rams’ decisions to upgrade the offensive line can make just as positive an impact as adding receivers like Smith and Jeffery.

What will matter most, though, for both quarterbacks and both teams is what their depth charts look like when the dust settles in September and the 53-man active rosters are finalized. As long as adding to and upgrading the skill positions is a draft priority for the Rams, both Los Angeles and Philadelphia should feel more confident that their young quarterbacks will take steps forward in the upcoming season.