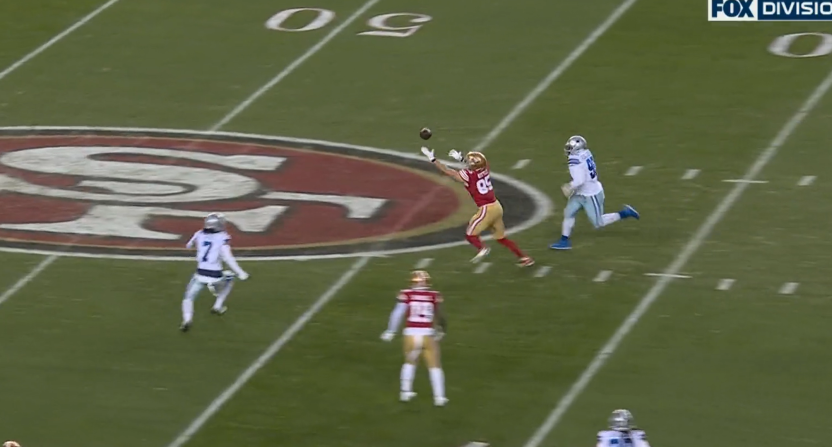 George Kittle just lit the NFL world up with an absolutely insane catch.

Kittle and the San Francisco 49ers needed a big play to make a move in their hotly-contested NFC Divisional Round affair with the Dallas Cowboys. So the All-Pro tight end stepped up and delivered one of the best catches in recent memory.

Our Comeback Twitter feed provided video and, as you can see, the catch was insane!

Another angle showed the sheer degree of difficulty of the clutch catch by the All-Pro tight end.

It didn’t matter that Kittle had to bobble the ball, secure it, or deal with Trevon Diggs bearing down on him. Nope, instead, the star tight end just pulled it in and ran like it was no big deal.

That the 49ers went down to score a touchdown on the drive only heightened the significance of the catch. If San Francisco wins and goes on to the NFC Championship Game, that catch will be remembered for a long time.

The 49ers themselves were in shock after Kittle hauled in the ball.

Pat McAfee boasted about the grab after it occurred as well, in his signature loud fashion.

Next Gen Stats provided a visual diagram of the catch. The floating circles are becoming quite popular on NFL Twitter.

Kittle traveled 13.7 yards of distance between the moment the pass arrived and the moment he secured the bobbling catch.#DALvsSF | #FTTB pic.twitter.com/Ya7QRJXGA6