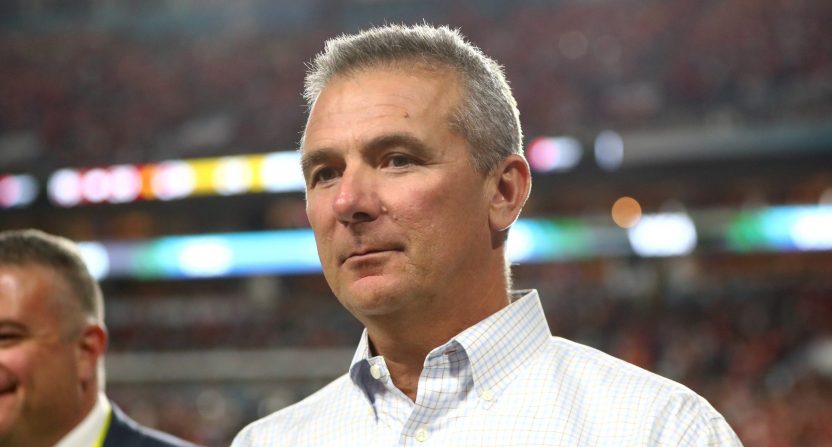 Seven NFL teams have new coaches. Which ones will turn out to be the best from this hiring cycle? No one knows, but let’s speculate anyway.

Reasons for optimism: Meyer has plenty of draft capital. Jacksonville has two first-round picks in April and will presumably use the top overall selection on Clemson’s Trevor Lawrence, the best quarterback prospect since Andrew Luck in 2012. The Jaguars have the most salary cap space in the league ($69 million) and the youngest roster.

Reasons for pessimism: Meyer won a national championship with his third-string quarterback at Ohio State. That can’t happen in the pros because the rosters aren’t that deep. In college, Meyer could out-recruit the competition. In the NFL, talent acquisition is limited by the draft, salary cap, and free agency.

Bottom line: The Jaguars made the biggest splash of the offseason. Meyer has won everywhere he has been, but the NFL has humbled a lot of great college coaches. Ultimately Meyers will be judged by how Lawrence performs.

Reasons for optimism: Fiery Saleh was the architect of a defense that helped carry San Francisco to the Super Bowl last year. This past season, despite a ton of injuries, the 49ers had the fourth-best defense in terms of total yards allowed. Saleh should be helped by the Jets having two first-round picks in April and next year. They also have the third-most salary cap space ($65 million) for 2021.

Reasons for pessimism:  The Jets haven’t been to the playoffs in a decade. Saleh inherits a terrible quarterback situation unless they can pull off a Deshaun Watson trade. Also, general manager Joe Douglas put together a team that started 0-13. This team needs help everywhere.

Bottom line: For most of the season, the Jets looked like the worst team in history. Still, they landed one of the hottest candidates of the coaching cycle. That’s a win. Expectations will be low. If Saleh goes 7-9, that will be viewed as major progress.

Reasons for optimism: Arthur Smith earned well-deserved praise for unlocking Ryan Tannehill’s potential. Not only did he turn around Tannehill’s career, but he got the most out of 2,000-yard rusher Derrick Henry and developed A.J. Brown. Imagine what he could do with former NFL MVP Matt Ryan, and star wide receivers Julio Jones and Calvin Ridley.

Reasons for pessimism: Ryan will be 36 years old when the season starts with a cap hit of $41 million. The Falcons have the fourth-worst salary cap situation for 2021 ($33 million over). That means Ryan will have to restructure his contract or be traded. Jones, 31, is coming off an injury-plagued season.

Bottom line:  Smith might be the most interesting guy on this list. He’s young (38), and his father is billionaire FedEx founder Fred Smith. If the Falcons can figure out their salary cap issues, they could reach the playoffs.

Reasons for optimism: Staley had a spectacular debut, as he oversaw a unit that led the league in fewest points, total yards, and passing yards allowed. He’s taking over a Chargers team that has some talent, including safety Derwin James, who missed last season with an injury. Staley also inherits Justin Herbert, who enjoyed the most impressive rookie season we’ve ever seen from a quarterback.

Reasons for pessimism:  The Chargers are betting long on a guy who was a defensive coordinator for one season. Five seasons ago he was an unknown assistant coach at NCAA Division III John Carroll. Now he’ll face his biggest challenge. Can the Chargers dethrone the Kansas City Chiefs in the AFC West?

Bottom line: If Staley builds a decent defense, the Chargers could be in the playoff hunt. The rest of the division — the Denver Broncos and Las Vegas Raiders — has a lot of question marks.

Reasons for optimism: While this is Campbell’s first permanent job, he has some experience. He took over the Miami Dolphins on an interim basis during the 2015 season. Campbell also knows Detroit, having played there as a tight end (2006-08). Thanks to the Matthew Stafford-for-Jared Goff trade, the Lions picked up two future first-round picks.

Reasons for pessimism: Historically, the Lions have been one of the worst franchises in the NFL. They haven’t won a playoff game since 1991. The length of Campbell’s six-year contract and the acquisition of Goff and his massive deal suggests that the Lions are in serious rebuild mode.

Bottom line: Detroit was going nowhere with an aging Stafford. However, its long-term commitment to Campbell is odd considering his thin résumé. The Lions could finish 2021 with the league’s worst record. At least his press conferences should be interesting.

Reasons for optimism: Sirianni has spent most of his recent career with Frank Reich, one of the more respected offensive minds in the league. Sirianni will be tasked with fixing Carson Wentz, assuming the quarterback isn’t traded. If he can get Wentz close to his MVP-caliber season of 2017, he’ll be widely praised.

Reasons for pessimism: Sirianni is walking into a mess. Wentz might be broken beyond repair and Jalen Hurts might not be the solution either. Even if Wentz is traded, this the offense needs a rebuild, including the offensive line and wide receivers. The Eagles also have the second-least amount of salary cap space ($51 million over).

Bottom line:  The Eagles forced out Doug Pederson, who won a Super Bowl three years ago. Management might not show much patience. Sirianni, 39, needs to show progress immediately because the NFC East might be lousy/winnable again in 2021.

Reasons for optimism: David Culley, the lone African American to be hired this offseason, has worked for two of the league’s best coaches: John Harbaugh and Reid. He has a wealth of experience, having been a part of six different NFL teams. Harbaugh described Culley as an excellent communicator and teacher. Those qualities could help unite a fractured organization.

Reasons for pessimism:  The Texans appear to be dysfunctional. It seems highly unlikely that Culley will get to coach Deshaun Watson, who owns the second-highest passer rating in league history. The 25-year-old quarterback has requested a trade because he doesn’t trust ownership and management. Star defensive end J.J. Watt could also be gone.

Bottom line:  Culley was the most surprising hire of them all. At the age of 65, Culley is also the oldest ever first-time head coach in NFL history. Without Watson, he could be set up to fail.