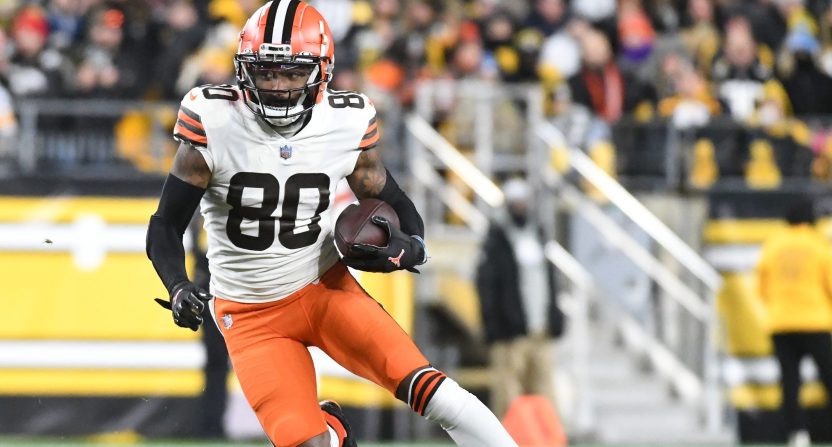 Five-time Pro Bowl receiver Jarvis Landry has a new home, albeit one he knows pretty well.

Jordan Schultz reported on Friday that Landry signed a deal with the New Orleans Saints. Landry later confirmed the reports on Twitter.

Breaking: Jarvis Landry is signing with the #Saints, per source.

The 5x Pro Bowl WR – with an impressive 43 career TDs – is from Louisiana and starred at nearby LSU.

Only 29, I’m told Landry wants to keep playing for many years. Juice is coming home! 🐯⚜️🥤

By and large, the signing was met with positive feelings from the NFL world.

Saints are officially a PROBLEM 🔥

Michael Thomas, Landry, and Olave is a nice wide out core https://t.co/9B6xNyQZZK

If this report is true and the #Saints bring Juice back home…alongside Honey Badger…#NFLSU is going to explode inside the Dome all season. https://t.co/w1coMIrEqF

Jarvis Landry’s going home, and should fit in perfectly with new Saints teammates Michael Thomas and Chris Olave. They say to build your receiver room like a basketball team, and this is that. https://t.co/sD0V7b4ZcW

Like safety Tyrann Mathieu, who the Saints also signed this offseason, Landry was born and raised in Louisiana and went to college at LSU.

Landry was one of the NFL’s most productive receivers from 2015-2019. He averaged 96 receptions, 1,086 receiving yards and better than five touchdowns per season in that span. The 2020 and 2021 seasons were more of a struggle. He caught 72 passes for 840 yards with three touchdowns in 2020. In 2021, he caught 52 passes for 570 yards with two touchdown receptions, setting career lows in all three categories.

But now Landry is going to a more stable situation than what he had with the Cleveland Browns, especially in 2021. And with a deep group of receivers around him, Landry should draw plenty of favorable matchups from opposing defenses. If he doesn’t, another receiver like Michael Thomas or rookie speedster Chris Olave will.

And even if Landry can’t regain his 2015-2019 form, it’s a savvy deal. Per Aaron Wilson of Pro Football Network, it’s a one-year contract. So, for the Saints it’s limited risk with the potential for a high reward.